Lack of investments in new tech may crimp TCS growth

For the first time since 2004, TCS’s annual growth may be less than or at best on par with Accenture’s

For the first time since TCS went public in 2004, its annual growth will be less than or at best on par with Accenture Plc., which is double the size of the Mumbai-based company. 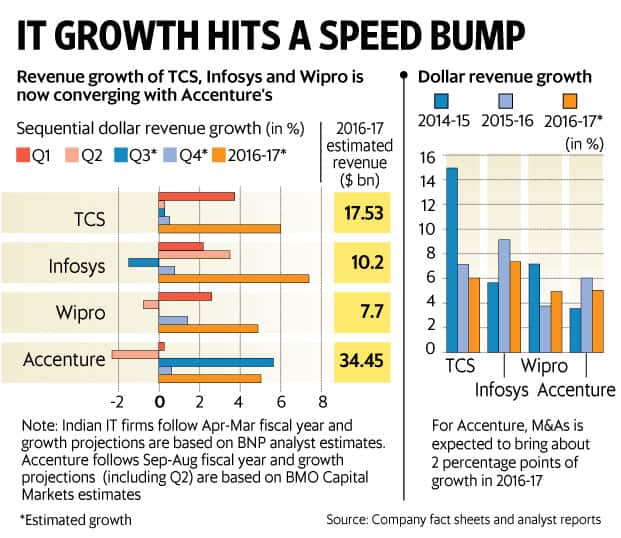 TCS, which ended with $16.5 billion in revenue last year, has stubbornly shied away from making any acquisitions, as the management believes it can build new technologies in-house.

A spokeswoman for TCS declined to offer a comment as the company is in the quiet period ahead of declaring its third-quarter earnings on 12 January.

In the current year, Accenture is expected by analysts to record 5% growth.

Considering TCS reported 15% growth in 2014-15, and 7.1% growth last year, a projected 6% increase in the current financial year underlines the biggest concerns analysts have on the future of India’s $150 billion outsourcing industry: growth is slowing because of not enough investments in disruptive technologies.

“We think that ACN (Accenture) has the best in class M&A (merger and acquisition) strategy within IT Services, which has helped drive digital revenue growth," Keith Bachman, an analyst with BMO Capital Markets, wrote in a note detailing the digital capabilities, last year. “Over the past few years, ACN has continually completed smaller deals that have either supported one of its industry verticals or provided new IP (intellectual property) for its New/digital strategy. While none of the acquisitions have been meaningful contributors to revenue growth by themselves, we think the collective sum has helped."

Newer technologies, like data analytics and cloud computing, along with a strong consultancy practice, are the growth drivers for technology outsourcing vendors as customers across industries are spending less on traditional outsourcing work like application maintenance.

A few Indian technology firms concede that they were lagging behind in making investments in newer technologies.

“There is no doubt that Accenture leads," said a senior executive at Wipro, who declined to be named as the company is in a quiet period ahead of its third-quarter earnings announcement on 25 January. “But there is enough and more opportunity in this space. We bought Appirio. So eventually the companies which make enough investments in these (digital) technologies should be able to grow faster."

Although digital remains a fuzzy word for now, growth in cloud computing or analytics or security offerings at home-grown companies lags that of Accenture.

Accenture claims its “New" offerings, which include digital, cloud computing and security-related solutions, accounted for 40% or $13.15 billion in revenue.

The new solution offerings reported over 30% growth in the year ended August last year. During the July-September period last year, TCS’s digital offerings grew 24% from the year-ago period to $704.2 million, or 16.1% of its quarterly $4.37 billion in revenue.