Why United Bank of India is in trouble

Behind the mounting NPAs lies a story of unreported bad loans, possible by the management

Kolkata: One day in late December, a retired executive of United Bank of India received a phone call from a branch manager of the bank he had served for over three decades, asking him to clear the modest interest overdue in a loan account for almost 90 days.

It was “a small account", says the former banker, who did not want to be identified, and covered by a term deposit he had mortgaged, but the branch manager was insistent that the amount be paid.

On 7 February, the former United Bank executive realized why.

That day, United Bank reported a net loss of ₹ 1,238.08 crore for the three months ended 31 December, against a net profit of ₹ 42.2 crore a year ago, largely on account of bad loans, or non-performing assets (NPAs), being unearthed by special audits conducted on the instruction of the Reserve Bank of India. It provided ₹ 2,260 crore for the bad loans.

The Indian banking system is loaded with stressed assets. Gross NPAs of 40 listed banks that have announced earnings for the December quarter rose 36% to ₹ 2.43 trillion from ₹ 1.79 trillion in the in the 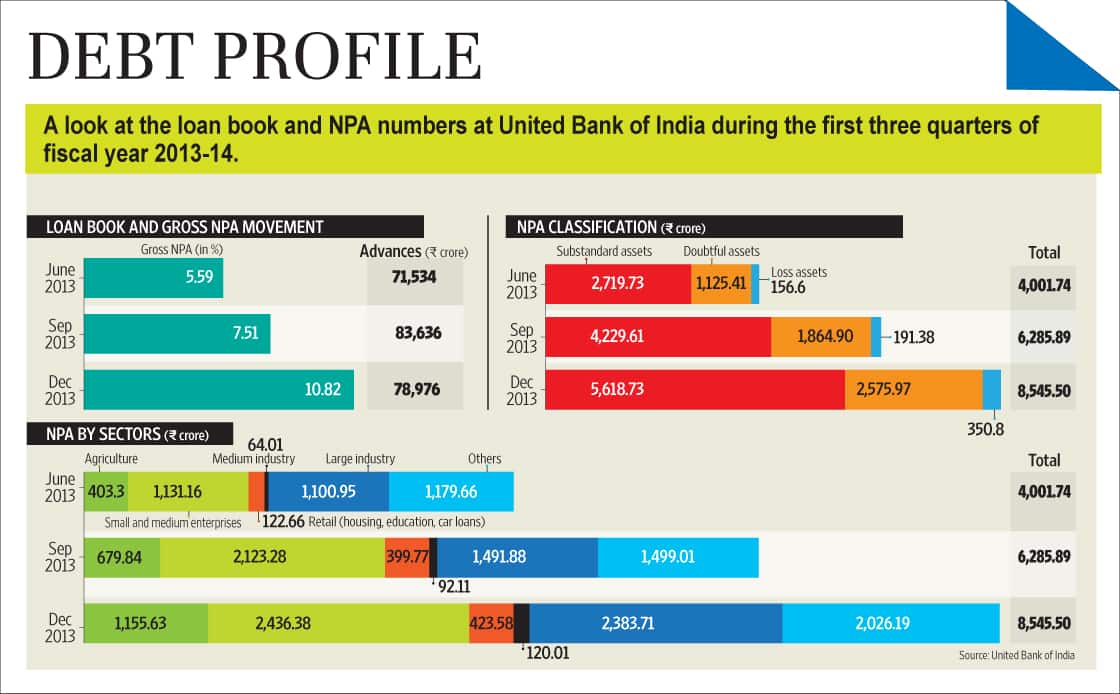 Much of this is on account of slowing economic growth, rash expansion by companies in the boom years between 2004 and 2011, and delays in large projects caused by fuel shortages and problems related to land acquisition and environmental clearances.

Even against this background, United Bank’s numbers made it an outlier. The biggest concern in the lender’s case are mounting bad loans.

Between July and December, United Bank’s sticky loans jumped from ₹ 4,001 crore to ₹ 8,546 crore, impairing its ability to lend because in the wake of rapid asset quality deterioration its capital adequacy ratio (CAR), the ratio of a bank’s capital to risk-weighted assets, crashed to 9.01%, just above the RBI’s mandated 9%.

The bank’s bad loans are approaching levels rarely seen in India. Its gross non-performing assets (as a proportion of total advances) of 10.82% at the end of December is the highest since Bank of Baroda reported a 11.42% number a decade ago. Its net non-performing assets of 7.44% is the second-highest after Dena Bank’s 7.85% in the quarter ended September 2004, according to Capitaline, a corporate database.

In the days since it declared its surprise results, United Bank has rarely been out of the headlines. Financial services secretary Rajiv Takru said the government could consider a capital infusion into the bank. The bank suspended all lending. And the bank’s union asked for a bailout.

But it wasn’t as if United Bank’s borrowers turned delinquent overnight. Behind the sorry numbers at the bank lies a story of unreported bad loans, poor systems, unused software, and possible management indiscretion—a story Mint pieced together after interviews with several current and former executives of the bank, none of whom wanted to be identified.

It isn’t a new story, at least not for United Bank.

“Most of United Bank of India’s unreported NPAs were in the sub- ₹ 10 lakh category," said an independent director on the lender’s board. “This bank has a history of juking the stats when it comes to tiny loans, but that does not mean the loans that have now been recognized as NPAs are not recoverable at all."

The bank was able to get away with it because the banking regulator does not normally put such small loans under its scanner during its routine annual financial inspection (AFI). After Archana Bhargava joined United Bank as its chairperson in April last year, she asked RBI to review its own AFI reports for the past three years.

Attempts to reach Bhargava were unsuccessful. Emailed questions sent to her were unanswered. Her office said she was on leave.

RBI, along with an arm of professional services firm Deloitte, launched special audits into the books of the bank. What these audits revealed isn’t immediately known, but the impact was visible in the results for the December quarter.

In the sub- ₹ 10 lakh category alone, the bank should have reported at least ₹ 2,500 crore of substandard assets more than a year ago—at the end of December 2012—if the management had followed RBI guidelines without using its discretion, said two executives.

Most of these small loans were provided to small businesses or under government-backed schemes such as ones to promote entrepreneurship and farming. Agriculture and small and medium enterprises account for ₹ 2,058 crore of the ₹ 4,545 crore increase in gross NPAs, whereas large industry added only ₹ 1,283 crore to United Bank’s woes.

For instance, the loan account of the retired executive cited above would not have been recognized as an NPA in view of the security held to cover the loan, but it had been declared substandard in keeping with RBI guidelines, the reason why he received a call from the branch manager.

Indeed, between July and December, such substandard assets at United Bank have gone up by ₹ 2,900 crore to ₹ 5,619 crore, which accounts for about 64% of the ₹ 4,545 crore increase in gross NPA during this period.

For at least three years till March 2013, United Bank has been closely “monitoring" NPAs, say several officials, all of whom asked not to be named. That’s a euphemism for not following RBI’s guidelines to the letter in recognizing NPAs.

United Bank uses the ubiquitous Finacle software (developed by Infosys Ltd) for accounting, but didn’t use it when it came to NPA recognition, said another official. The management was of the view that Finacle had several deficiencies and that it reported more loans as NPAs than the bank should have even if it fully complied with RBI regulations, he added.

But, surprisingly, for years, the bank didn’t address these deficiencies. Only in the last one-and-a-half years has United Bank been trying to “optimally" use Finacle, added the director cited above.

“United Bank waited for too long," this person said. “When the problems were finally detected, it was already too late, and it couldn’t avoid reporting over ₹ 4,500 crore of fresh NPAs in just two quarters."

To be sure, United Bank isn’t the only Indian lender which allows its top executives to influence NPA recognition based on their judgement on loan recoverability. This helps in the short run as it boosts profitability, but in the event of a change in accounting policy, the bank takes a hit.

But United Bank found it particularly difficult to cope given its small loan book of ₹ 78,976 crore, and equity capital of ₹ 554 crore.

“Wrong NPA classification is (the) result of the deficiencies in the software used by the bank" and the difficulty in “checking each asset classification manually", United Bank said in an emailed statement. There was no “intentional intervention at any level to hide NPA", the bank said.

Finacle has “inherent deficiencies to correctly identify NPA in certain categories of borrowers", United Bank said, adding that these deficiencies have yet not been addressed. The bank said it expects Infosys to provide solutions, some “very shortly".

“The weakness of the tools used by the bank previously and also (of those) used in the September and December quarters largely explain variation in NPA figures. Manual checking of asset classification...pose a challenge for the bank, particularly in case of small accounts" because of the sheer number that one has to deal with, United Bank said.

An Infosys spokesperson said in a text message, “We do not comment on matters pertaining to our clients."

The bank, which 15 years ago faced the prospect of being merged with state-run lenders for its financial infirmity, has for years been trying to boost profits. It did so even at the cost of being less cautious about reporting NPAs, but the intention always was to build from profits a reserve large enough that United Bank didn’t have to seek capital infusion from the government to expand, said a retired executive.

The bank now has at least 6,000 substandard accounts, having fallen from the standard grade by “only a small margin", said the director cited above. These accounts can easily be upgraded and this problem is likely to be “substantially addressed" in the March quarter, this person added.

Could things get worse?

The unreported NPAs have been “fully identified", according to the director, which means there could be significant decline in provisioning in the March quarter.

United Bank said on Monday that it had formed teams to launch an “intensive drive" to recover at least ₹ 2,000 crore of NPAs in the March quarter. The bank, according to officials, is looking to sell to asset reconstruction companies, secured loans worth about ₹ 700 crore, after suspending such transactions for almost a year.

“Why they held on to these accounts for so long is a mystery," said the director cited above.

A turnaround can only happen if the bank could start making loans again, and that is now dependent on capital infusion. United Bank has said it wants to raise up to ₹ 1,000 crore through sale of shares and debt instruments to the Union government and institutional investors.

Within the bank, though, a sub-plot is playing itself out in the form of a below-the-surface fight between officials who believe there was nothing wrong in the management using its discretion to decide which loans would turn bad and those who believe that non-adherence to RBI guidelines and misuse of software lies at the core of the current crisis.

The former claim that if most of the bad loans aren’t really bad, and borrowers pay back the money, then the latter can claim credit for super-normal profits when provisions start getting written back to the profit and loss account, shoring up net profit.

Only in the light of those write-backs should judgement be passed on the wisdom of the now abandoned practice, add the former.

That’s a plausible argument but for the fact that it is against the rules.