Has Reserve Bank of India got its exchange rate strategy wrong?

The steady appreciation of the Indian rupee this year has led to fears that Indian exports have been priced out of global markets. Three of the four measures of the real effective exchange rate (REER) tracked by the Reserve Bank of India (RBI) show that the rupee is grossly overvalued.

Another group of critics makes exactly the opposite point. The build-up of forex reserves shows that RBI has been intervening too heavily in the foreign exchange market to keep the rupee down, they argue. A central bank committed to an inflation target should not be so focused on managing the exchange rate.

The Indian central bank thus finds itself trapped in a pincer—between those who accuse it of allowing the rupee to appreciate too much and those who insist that it is too focused on keeping the rupee down.

Has India got its exchange rate policy all wrong?

A comparison with what other large emerging market economies have done over the past year offers some important clues. The data on percentage changes in REER is taken from the Bank for International Settlements so that comparisons across countries are possible. Most peers among the emerging markets have seen their REERs go up over the past year because of the dollar slump. India is somewhere in the middle of the pack. REER is the weighted average of a country’s currency relative to an index or basket of other major currencies, adjusted for the e­ffects of inflation. Does the rapid increase in reserves make India a currency manipulator? This is an important question given the strong signals emanating from the Donald Trump administration that the US could get into trade wars with countries that have been manipulating their currency to capture markets. China is the prime target, but all emerging market countries need to worry.

The chart below does not show a strong correlation between reserves accumulation and currency movements. The case against currency manipulation would be stronger if there was a clear negative correlation – or if those countries that intervened most heavily in the foreign exchange market by buying dollars would also be the ones that saw minimal exchange rate appreciation, or vice versa. Reserve accumulation by the RBI has tended to move in tandem with net capital inflows into the Indian economy. The chart below shows that the two move in tandem --- especially during extreme quarters. However, the correlation coefficient (a measure of how closely two variables move in tandem, taking values between 0 and 1) between the two is 0.45. This roughly suggests that movements in foreign portfolio investment (FPI) inflows account for only about half of the increase or decrease in forex reserves. 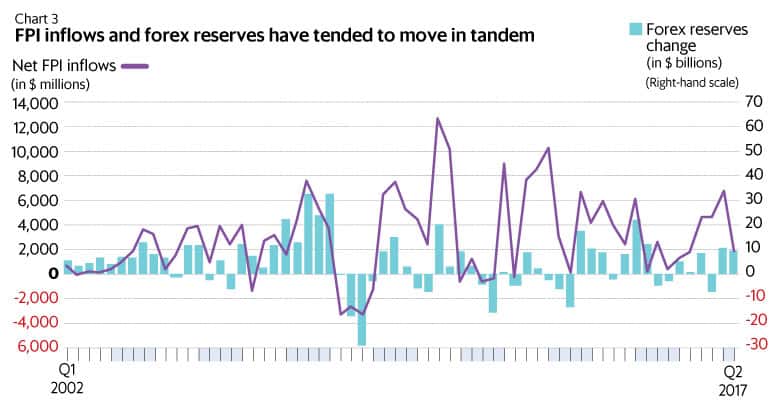 The amount of dollars the RBI buys in any quarter also depends on other factors such as the quarterly trade deficit or the domestic liquidity situation or the ability of the central bank to conduct open market operations to sterilize its foreign exchange intervention.

The final question: Has the RBI got excess foreign exchange in its kitty? Any country needs foreign exchange reserves as insurance against unexpected global shocks. But there are also fiscal costs involved since sterilized intervention in the foreign exchange market in effect means swapping high-yielding domestic securities for low-yielding foreign securities.

There are three common ways to assess the adequacy of reserves – in terms of how many months of imports they cover, their size with respect to short-term foreign debt that needs to be redeemed within a year, and as a proportion of the stock of broad money in the economy. The third measure has not been considered here since money supply plummeted in fiscal year 2017 because of demonetization. The other two measures – import cover and short-term debt cover – do not suggest that the size of the reserves at this point of time is out of sync with what India has had over the past decade. However, the forward contracts that the RBI has been entering into to buy dollars in the future have not been taken into account. 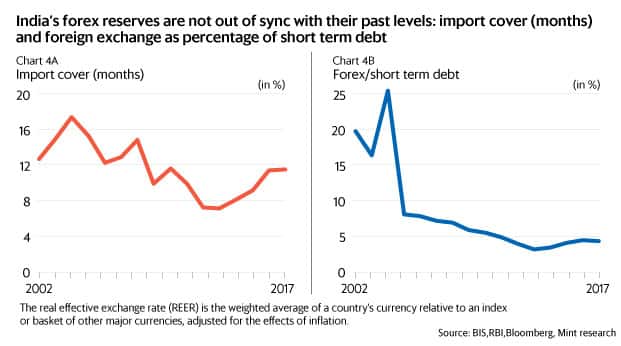 India has seen rapid reserves accumulation previously as well – at the turn of the century when Bimal Jalan was RBI governor, in the quarters preceding the financial crisis when Y.V. Reddy had to ensure that capital inflows did not overwhelm domestic monetary policy, and now over the past three years when Raghuram Rajan followed by Urjit Patel have been in charge. Such episodes generate the same dilemmas. Should the currency be allowed to appreciate? Should the central bank step in to prevent exports becoming uncompetitive? To what extent should it worry about foreign exchange intervention creating domestic excess liquidity problems? Should it put up temporary capital controls?

The answers are never easy.

Catch all the Industry News, Banking News and Updates on Live Mint. Download The Mint News App to get Daily Market Updates.
More Less
Subscribe to Mint Newsletters
* Enter a valid email
* Thank you for subscribing to our newsletter.
Topics
mint-india-wire plain-facts