With Big Data analytics solutions increasingly being made available to enterprises in the cloud, more and more companies will be able to afford and use them for agility, efficiency and competitiveness

According to research firm International Data Corporation (IDC), the global big data technology and services market is expected to grow at a compound annual growth rate (CAGR) of 23.1% over 2014-2019, and annual spending is estimated to reach $48.6 billion in 2019 (http://bit.ly/1NKIkCu).

With Big Data analytics solutions increasingly being made available to enterprises in the cloud, more and more companies will be able to afford and use them for agility, efficiency and competitiveness.

MarketsandMarkets, a research firm, estimates the BDaaS segment will grow from $1.8 billion in 2015 to $7 billion in 2020. There are other, even more optimistic estimates: research firm Technavio, for instance, forecasts this segment to grow at a CAGR of 60% from 2016 to 2020 (http://bit.ly/2df6tW9).

Where does this optimism stem from?

For almost 10 years, it was only the biggest of technology firms such as Alphabet Inc.’s Google and Amazon.com Inc., that used data analytics on a scale that justified the idea of ‘big’ in Big Data. In industry parlance, three key attributes are often used to understand the concept of Big Data. These are volume, velocity and variety of data—collectively called the 3Vs.

Increasingly, not just Google and its rivals, but a much wider swathe of enterprises are storing, accessing and analysing a mountain of structured and unstructured data. The trend is necessitated by growing connectivity, falling cost of storage, proliferation of smartphones and huge popularity of social media platforms—enabling data-intensive interactions not only among ‘social friends’ but also among employers and employees, manufacturers and suppliers, retailers and consumers—virtually all sorts of connected communities of people. 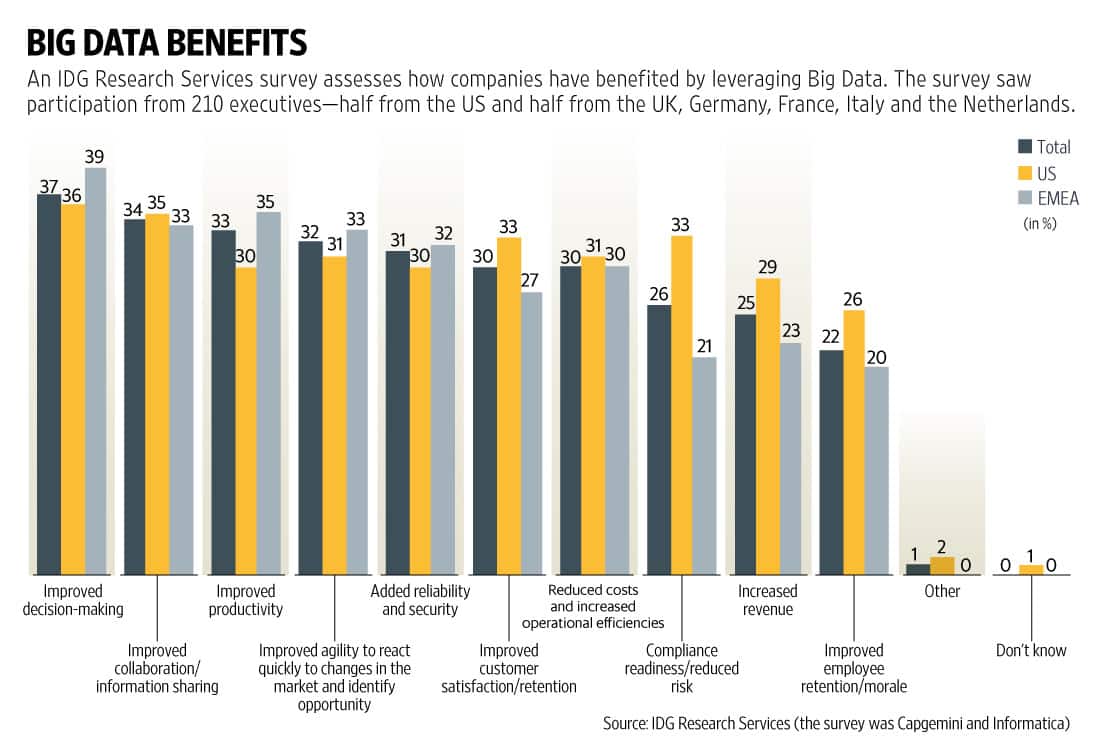 A November 2015 IDC report predicts that by 2020, organisations that are able to analyse all relevant data and deliver actionable information will achieve an extra $430 billion in productivity benefits over their less analytically oriented peers (http://bit.ly/2cFhu1f).

The nascent nature of BDaaS, however, is causing some confusion in the market. In a 6 September article on Nextplatform.com, Prat Moghe, founder and chief executive of Cazena—a services vendor—wrote that there is confusion regarding the availability of “canned analytics or reports". According to him, vendors (solutions providers) should be carefully evaluated and aspects such as moving data sets between different cloud and on-premises systems, ease of configuration of the platform, etc., need to be kept in mind before making a purchase decision (http://bit.ly/2bU6K2n).

“Some BDaaS providers make it easy to move datasets between different engines; others require building your own integrations. Some BDaaS vendors have their own analytics interfaces; others support industry-standard visualization tools (Tableau, Spotfire, etc.) or programming languages like R and Python. BDaaS vendors have different approaches, which should be carefully evaluated," he wrote.

Nevertheless, the teething troubles are likely to be far outweighed by the benefits that BDaaS brings to the table. The key drivers, according to the IDC report cited above, include digital transformation initiatives being undertaken by a lot of enterprises; the merging of real life with digital identity as all forms of personal data becomes available in the cloud; availability of multiple payment and usage options for BDaaS; and the ability of BDaaS to put more analytics power in the hands of business users.

Another factor that will ensure growth of BDaaS is the scarcity of skills in cloud as well as analytics technologies. Compared to individual enterprises, cloud service providers such as Google, Microsoft Corp., Amazon Web Services and International Businsess Machines Corp. (IBM) can attract and retain talent more easily and for longer durations.

Manish Mittal, managing principal and head of global delivery at Axtria, a medium-sized Big Data analytics solutions provider, says the adoption of BDaaS in India is often driven by business users. While the need is felt by both chief information officers and business leaders, he believes that the latter often drive adoption as they feel more empowered in the organisation.

The potential for BDaaS in India can be gauged from Axtria’s year-on-year business growth of 60% for the past few years—and there are several niche big data analytics vendors currently operating in the country (besides large software companies).

Mittal says that the growth of BDaaS adoption will depend on how quickly companies tackle the issue of improving data quality.