NPCI's target is a billion transactions a day in next three years, says MD and CEO A.P. Hota 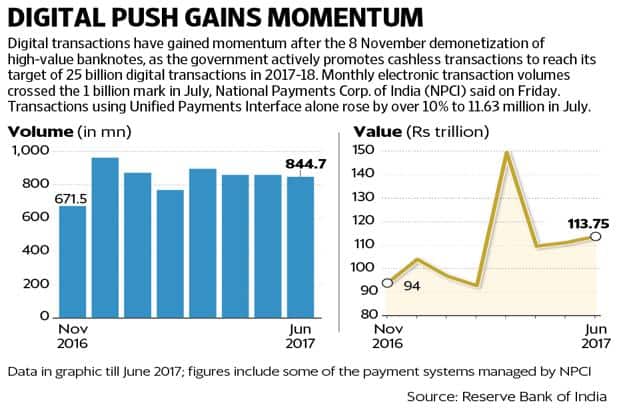 “Highest growth has been seen in the mobile payments and Aadhaar-based payments. This change was achieved by way of adding new products to NPCI’s portfolio and widening the membership of all products. The next logical target can be a billion transactions a day may be in three years," said A.P. Hota, managing director and chief executive officer, NPCI.

On Wednesday, NPCI said in a statement that the transactions using UPI alone rose by over 10% to 11.63 million in July from 10.35 million in the previous month.

UPI is a payment system launched by NPCI which facilitates instant fund transfer between two bank accounts on the mobile platform.

The 8 November demonetisation of high-value banknotes led to a proliferation of cashless transactions.

“It gives us a great deal of satisfaction that NPCI has truly emerged as the powerhouse of all financial transactions in India. It is a great achievement to join the leagues of reputed payment institutions which process billions of transactions every month globally," Hota said.