New Delhi: Although parts of India might have come to a standstill thanks to todays ’Bharat Bandh", it has kept Indian tweeters very busy! The Hashtag ‘Bharat Bandh’ became the most trended topic on the site, as users tweeted out their experiences and opinions about the situation.

The Bharat Bandh or pan-India shutdown was called to protest against the fuel price hike.

Schools, colleges, public transport and offices across the country remained closed for the day causing inconvinience to the aam admi. But it seems like many enjoyed this unexpected holiday and almost everyone certainly had an opinion! By early noon, ‘Bharat Bandh’ was on the top of the ‘trending on Twitter" list.

Some tweeples called it a a complete flow-shop with nothing to achieve.

Others enjoyed the holiday. Most just poked fun at the situation. 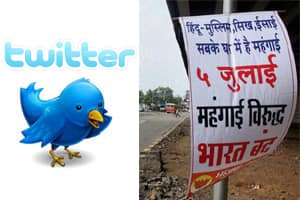 TusharG (Tushar A. Gandhi) sarcastically tweeted that he expected to find everything cheaper tomorrow as a result of a successful Bharat Bandh. Many Mumbaikars however, were really surprised at the impact of the bandh on day to day life in the city, including actor Amitabh Bachchan who tweeted "Bharat Bandh, insaan band, saans band, aasha band, niraasha band, ...!! Mumbai is so silent this morning ! Eerie !!"

b50 (Bombay Addict), a man from Mumbai suggested that we all should ‘halt and stall’ parliament to protest against the poor functioning of our MPs.

Another user Ventrino suggested that we should use Vuvzela to ‘blow out’ the protestors off the road.

There were supporters of the bandh as well, but they were in a distinct minority. Parishpatil (Parish Patil) tweeted that he expected fuel prices to cool off after the bandh. But not too many people agreed.

What was noticeable, was that although the bandh captured a lot of attention, it was mostly due to the destruction caused by its enforcers across India. The larger point of the bandh, which was to demand relief for the ordinary man went largely unremarked upon.