Can the Indian banking sector be revived in 2018?

Things will worsen a little more before they start to become better. That’s the latest prognosis by India’s central bank of the health of Indian banks, as outlined in its latest Financial Stability Report, released on 21 December.

Already at alarming levels, gross non-performing assets (GNPAs), or bad loans, of scheduled commercial banks increased from 9.6% of gross advances in March 2017 to 10.2% in September 2017. Worse, this is projected to increase further over the next 12 months. It’s particularly bad for the set of public sector banks, one-sixth of whose loan book is stressed. 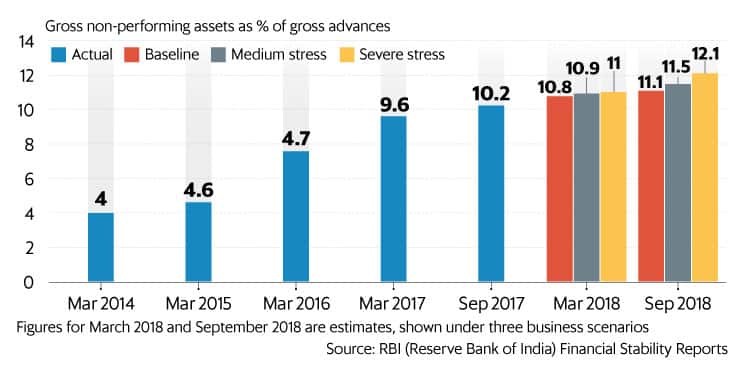 The first is recovery. Authorities are using a new, more stringent bankruptcy law to put defaulters under the hammer. In the first phase, 12 companies from the top 100 borrowers, who account of 25% of all bad loans, have been referred to the National Company Law Tribunal under the Insolvency and Bankruptcy Code. It remains to be seen how much lenders can recover—credit rating agency Crisil has estimated 40%—and how soon.

The second track is banks raising capital, partly to absorb the shock of their bad loans and partly to step up lending. Banks have raised a record Rs33,248 crore via qualified institutional placements (QIPs) and an additional Rs40,000 crore is planned; additionally, the government has also committed to recapitalizing banks. The third track is credit growth. The spike in bad loans curtailed the ability of banks to lend. Credit growth fell for three straight years. In the six months to September, it rose marginally. What happens on the first two tracks will have a bearing on how credit grows from here on.