What night lights reveal about the Indian economy

While Connaught Place in Delhi or Bandra in Mumbai generate annual GDP in excess of $120 million, that figure plunges to less than $20 million in the fringes of even the leading cities

But while neighbourhoods like Connaught Place in Delhi or Bandra in Mumbai generate an annual output in excess of $120 million, that figure plunges to less than $20 million in the fringes of even the leading cities. 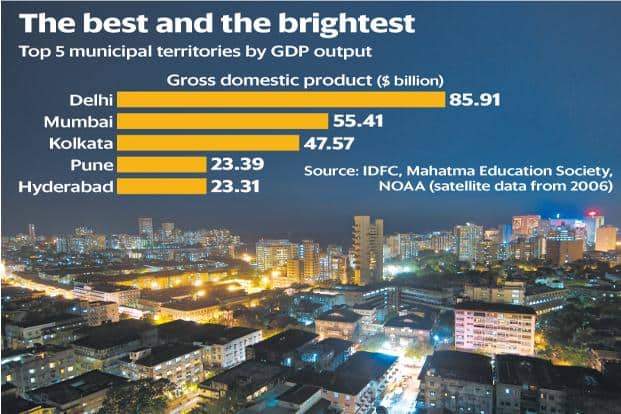 Delhi emerges as the country’s biggest sub-economy, but the use of night lights has several known limitations: informal activity which doesn’t generate much light doesn’t get counted; government buildings/activity might inflate the economic output of some regions; and what is measured may actually be consumption rather than the creation of productive assets.

The analysis by IDFC Institute (available as an interactive tool here) also reveals that cities clearly evolve along transportation corridors, which most municipal governments have failed to adequately expand and improve. Also, south Indian states such as Kerala and Tamil Nadu have done a far better job at distributing the state’s total economic output across multiple hubs than their northern counterparts.

The first such attempt to map India’s economic geography ties in neatly with the government’s own push to comprehensively rank the performance of India’s leading cities for the first time this year.

“The livability index ranking of Indian cities will try to use city GDP as a component," said a senior official in the ministry of housing and urban affairs, who did not wish to be named. “It’s a challenge to measure the GDP of a city. But it is an important measure of economic performance. Both the EU and China have developed frameworks to capture the performance of sub-national economies," the official said.

While relying on GDP as a single yardstick of measure has its limitations, the need to rely on night lights to come up with an estimate shows how poorly the performance of India’s cities is currently measured, said Kshitij Batra, a former junior fellow at IDFC Institute.

“The technique is more commonly used in east Africa where countries don’t have reliable national data. This is one way to track the health of a city’s economy. In India, some districts are bigger than many countries. But there is no reliable way of measuring basic economic activity," he said.

Since access to imagery from Indian satellites is heavily restricted, researchers had to rely on global open data sets. While the current analysis is based on 2006 data, efforts are on to update it to 2014, which would allow for comparisons on how different city economies performed over the last decade.

Such time-series trends of the ups and downs city economies experience may become increasingly relevant as India urbanises more, said P.K. Mohanty, chair professor of urban economics at the University of Hyderabad.

“Nearly half of the world’s output comes from only 40 regions. The city of New York is the world’s 17th largest economy by size. A similar trend will play out in India, where 70% of the country’s future employment growth will come from cities. Until now, India’s ability to measure and track the economic performance of its cities has been abysmal. This needs to improve," he said.