New Delhi: A blog post by a student was instrumental in TVS Motor Co. Ltd’s victory over Bajaj Auto Ltd in their recent legal skirmish over patent infringement issues, setting a precedent for the use of blog content by the country’s courts.

In order to understand the complex technologies under consideration, the judges curiously chose to rely heavily on a blog entry by J. Sai Deepak, a final year LLB student from the Rajiv Gandhi School of Intellectual Property Law in IIT Kharagpur. The blog, “Spicy IP India", deals with issues of intellectual property law. 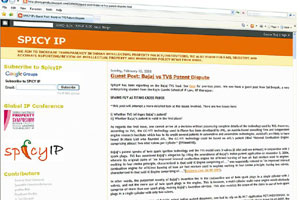 Reliable information? The Spicy IP India blog entry by J. Sai Deepak that was cited by the Madras high court.

A division bench of Chief Justice S.J. Mukhopadhyaya and justice Ibrahim Kalifula held that the technology used by TVS was considerably different from the twin spark plug technology patented by Bajaj. In order to establish this difference, the judgement quoted large sections of the blog to explain the distinctive features of both engines.

“The distinction made out by the author of the said article is quite appealing and does not conflict with the facts pleaded by the parties before us," the judgement said.

What gave the case significance beyond being just another chapter in the Bajaj-TVS tussle was that it set a precedent for the future use of blogs in courts. Indian courts have traditionally relied only on books and journals whose reputation has been firmly established.

Legal experts believe this is the first time a blog has been cited in a judgement by an Indian court. “It was bound to happen at some point. There are two interesting aspects here—one, the reliance in a judgement on an Internet source, and the other, the acknowledgement of the source by the judges," says Sumeet Malik, associate editor at Lucknow-based Eastern Book Co. that publishes reports on Supreme Court cases. “There have been certain instances where print materials have been cited without acknowledging the authors."

Sudhir Krishnaswamy, professor at National University of Juridical Sciences, Kolkata, who specializes in constitutional law, says Indian judges tend to be “reckless" in their use of sources in judgements. “In judgements on affirmative action judges have cited from Upanishads to speeches and party manifestos. I have read both the blog post and excerpts from the judgement and this is a better instance," he said. The judgement, while relying on the blog post, does not mention what elements would qualify other blogs to be used as a references. Unlike academic journals, online blogs are not peer reviewed, and often do not cite authorities and reliable sources to support facts and conclusions.

Malik adds that this is an “interesting development" as Indian courts are grappling with the usage of Internet sources in judgements. He points to two separate and conflicting judgements of the Supreme Court, both of 2008, that have different opinions about the usage of Wikipedia in Indian judgements.

While justice S.H. Kapadia allowed the usage of definitions of telecommunication devices in Reliance Infocomm Ltd v. BSNL Ltd, justice S.B. Sinha in another case held that inputs in Wikipedia couldn’t be relied upon in court, as he was not convinced of their authenticity.

In the US, Krishnaswamy explains, there is the “Bluebook" that provides a framework of rules and prescribes the style of legal citations.

It discusses elements of citing electronic media and non-print resources.

Krishnaswamy and Rahul Mathan, Bangalore-based partner of law firm Trilegal, say that in most patent trials across the world courts rely on other public sources or experts instead of allowing parties to lead evidence.

Sai Deepak, the author of the blog post, says he was quite surprised to hear that his opinion had been relied upon by the high court. While maintaining that the Spicy IP blog was written for a professional audience, and included writers who are professors and experts in the field of intellectual property law, he expressed his concern that other blogs might not subscribe to the same academic standards.

But Mathan adds, “Blogs are becoming more and more mainstream. If judges can quote from newspapers’ news and opinion pieces, reply to letters and convert them to public interest litigations, I see no reason why they will not give the same value to a blog."

He says, however, it would be incorrect if the courts were to rely on facts and not the logic laid down in blog posts. “(At the) end of the day if a piece of writing, regardless of where it is has been published, has logic and reasoning and is written by a knowledgeable person a judge is free to accept it."

Since the Spicy IP blog is exceptionally well written for a blog, its use in this case might well be justified. However, blogs vary widely with respect to the qualifications of authors and overall authenticity. Whether other courts will follow this example and accept certain blogs as credible sources remains to be seen.

As for the original dispute, it is far from settled. Bajaj has decided to file an appeal in the Supreme Court challenging the decision to permit production and sale of the TVS Flame.

Nalini Chidambaram, the senior counsel representing Bajaj, says the blog was used without prior referral to Bajaj’s lawyers, giving them no opportunity to argue against its use. She also said Bajaj would question the reliability of the student’s article when the case was heard in the Supreme Court.

The Madras high court has rejected Bajaj’s request to stay the operation of its judgement for two weeks till it appeals in the Supreme Court.

In parallel proceedings, TVS has applied to the Intellectual Property Appellate Board in Chennai, asking for a revocation of Bajaj’s patent on twin spark plug technology.

T.K. Bhaskar, counsel for TVS and partner at HSB partners, Chennai, said the judgement is “in order". “There is nothing wrong as the blog is not the sole basis on which the court has laid down its judgement. The courts can use anything that is credible and of sound reasoning in their judgements."