Mumbai: Publicly traded banks in India added nearly ₹ 1 trillion in bad loans in the quarter ended 31 December, amounting to a 29% increase in the stock of deteriorated debt from end-September, as lenders responded to a central bank call to accelerate recognition of stressed assets.

Raghuram Rajan, governor of the Reserve Bank of India (RBI), set banks a March 2017 deadline to clean up their balance sheets and has nudged them to treat some troubled loan accounts as bad and make provisions for them by the end of this March.

The central bank expects the clean-up, which started in the December quarter, will restore the health of banks, revive lending and, in turn, boost economic growth.

“Now that these banks are recognizing all the stress by the end of this year, they would be able to come back stronger in the new financial year and look at fresh capital-raising plans," said Siddharth Purohit, an analyst at Angel Broking Pvt. Ltd.

Gross non-performing assets (NPAs) of 39 listed banks surged to ₹ 4.38 trillion for the quarter ended 31 December, from ₹ 3.4 trillion at the end of September, shows data collated by Capitaline. Provisions against bad loans surged by 90% between the September and the December quarters. 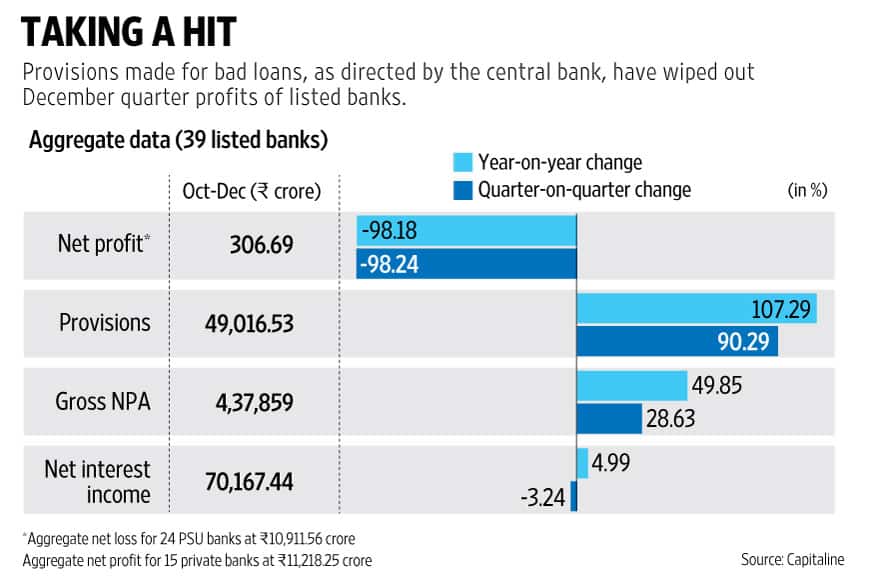 The 24 public sector banks were the worst performers, having reported an aggregate loss of ₹ 10,911 crore in the December quarter compared to a profit of ₹ 6,970.8 crore in the year-ago quarter.

Such was the surge in bad loans that provisions towards these wiped out the profits of 12 out of the 39 listed banks. Out of the 27 banks that reported a quarterly profit, six saw profits plummet more than 70% from a year-ago period.

The pain may not be over.

The regulator told banks that they could spread the recognition of bad loans and provisions against them over the third and fourth quarters. As such, a number of banks, including large banks like State Bank of India (SBI) and ICICI Bank Ltd, have warned that fourth-quarter profits may also be hurt.

SBI chairman Arundhati Bhattacharya said the lender could see a similar hit on its profit for the fiscal fourth quarter because of loan slippages and the impact of assets being reclassified.

The bank saw fresh slippages of ₹ 20,692 crore during the three months ended December and profit dipped by 62% from a year ago.

ICICI Bank, which reported slippages of ₹ 6,554 crore in the third quarter, will also take a further hit in the fourth quarter of this financial year.

“Additional loans aggregating to a similar amount may slip into NPA in the fourth quarter from the cases highlighted by the RBI. About half of these loans are part of the already restructured portfolio of the bank and relate to power projects," N.S. Kannan, executive director at ICICI Bank, said in an analyst conference call on 28 January.

Some lenders, including Bank of Baroda (BoB) and Axis Bank Ltd, have stated they have provided fully for the loans which were flagged by RBI in the October-December period, reducing uncertainty surrounding their asset quality picture.

“We expect some fair degree of stability going ahead. Over the next 15 months, we should be able to see some write backs on these high additional provisions made in the December quarter," said P.S. Jayakumar, managing director and chief executive officer at the Bank of Baroda, after announcing earnings on Saturday. India’s second largest state-run bank reported a third-quarter loss of ₹ 3,342 crore—the highest by any lender in the December quarter.

Apart from Bank of Baroda, IDBI Bank, Bank of India and Indian Overseas Bank were hit the hardest, posting the largest losses this quarter.

The gross NPA ratio, as a percentage of total loans, has also surged post this quarter.

Indian Overseas Bank, which has been under RBI observation, has the highest gross NPA ratio of 12.64%.

Uco Bank, which reported a gross NPA ratio of 10.98%, has the second highest ratio of bad loans across the sector.

Bank of Baroda, Bank of India, United Bank of India and Dhanlaxmi Bank have gross NPA ratios of more than 9% of their total loans.

As earnings from banks have rolled in, share prices have been hammered on the exchanges. Over the past two weeks, the NSE’s PSU Bank Index has fallen 14.2% while the benchmark Nifty has fallen 7.7% over this period.

A drop in their market valuations would mean that a number of these public sector banks would find it difficult to access the capital market to raise funds by dilution of government stake, as was earlier envisioned.

Instead, most of them would have to depend on infusion from the government, which finance minister Arun Jaitley has assured would be readily available.

Some banks said they won’t need capital infusion from the government.

“We have told the government our name should be removed from any list for additional capital infusion. We are very capitalized for the future and will be able to raise more funds on our own accord," said Jayakumar of Bank of Baroda.

IDBI Bank is in the process of raising ₹ 3,771 crore through the qualified institutional placement (QIP) route. Others, including SBI, have approvals in place for QIP issues and have said they will approach the market when the environment is conducive.

Meanwhile, some bankers have cautioned that the significant surge in bad loans will impact their ability to lend. This is particularly true for public sector banks which have lower levels of capitalization than private banks.

SBI’s Bhattacharya said that the rise in bad loans would make it difficult for the bank to meet its earlier stated loan growth target of 13-14%. The bank has lowered its target to 12-13% for fiscal 2016.

Analysts say this could lead to a decline in the market share of public sector banks.

“With an increased stressed asset ratio, we could see some of the risk appetite coming off for public sector banks, which may result in private banks taking over customers where they can. This will change the market shares going ahead," said Vibha Batra, senior vice-president at ICRA Ltd.

Rajan, however, stressed on importance of such a clean-up in his speech on 11 February, in which he said, “while the profitability of some banks may be impaired in the short run, the system, once cleaned, will be able to support the economic growth in a sustainable and profitable way."

Both Rajan and Jaitley have cautioned against exaggerating the problem and have assured that adequate capital and liquidity would be provided to the banks that need it.

Overall stressed assets, including restructured loans, in the banking sector made up 11.3% of outstanding loans as of September, according to RBI. This number is likely to rise following the latest quarterly earnings announcements.