If you’re a techie, then The Crunchies Awards,is probably one of the highlights on your completely synched calendars across all PDAs (personal digital assistants). And if you’re not, then The Crunchies are probably something you should keep an eye out for, because if the winners and even those nominated haven’t made inroads into your life already, rest assured, they will pretty soon.

Currently in its fifth year, this annual technology award ceremony is organized by TechCrunch, the leading online magazine in the digital world. This year’s edition was co-hosted by VentureBeat and GigaOm. Held on Tuesday at the Davies Symphony Hall in San Francisco, US, the night was hosted by the witty Harris Wittels who goes by the Twitter handle @Humblebrag, where he retweets “boastful and humble tweets" across the Web. In fact, the comedian-writer started the night reading out (and he read out everything!) a couple of samples of humble bragging by celebrities. Sample these: 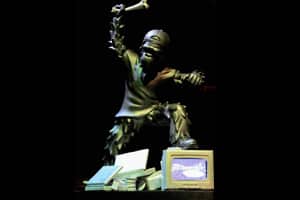 The angry monkey monolith for The Crunchies. AFP

Arianna Huffington, editor-in-chief, Huffington Post: “Helicopter from Munich to Switzerland had to land 100km away because of snow. Gonna have to rough it in an armoured snow hovercraft the rest of the way#FirstWorldProblems."

You can view Wittels introduction at The Crunchies here.

This year, awards were presented in 20 categories, in which Dropbox, the most popular cloud service in the world, won the Best Overall Startup of 2011 as well as the Best Cloud Service, beating worthy contenders such as Box, Asana and CloudFlare.

Indian-born American venture capitalist VinodKhosla, co-founder of Sun Microsystems and founder of Khosla Ventures, was nominated for the VC of the Year award, alongside bigwigs such as Benchmark general partner Matt Cohler, partner at Kleiner Perkins Caufield & Byers Aileen Lee, and founders-partners of Andreessen Horowitz, Marc Andreessen and Ben Horowitz, who won the award.

Other winners of the night were:

Best Shopping Application: Fab, which features daily design inspirations and sales at upto 70% off retail. In 2010, GroupOn won in this category.

Best Mobile Application: Evernote took over from last year’s winner Google Mobile Maps for Android. This nifty online application allows users to take notes on any device and sync it across platforms.

Best Location Application: Grindr is the first one to win in this newly introduced category. This is the largest all-male location-based network in the world.

Best Tablet Application: Fotopedia, which is THE platform to create visual content for mobiles.

Best Design: Path 2.0, combines all the features of its predecessor With, with some added features, like your sleeping habits!

Best Bootstrapped Startup: Imgur, the photo-sharing site made popular by the Reddit community.

Best New Device: Nest, the hottest and coolest thermostat on the market this year. Last year, it was the iPad.

Angel of the Year: Reid Hoffman, co-founder and executive chairman at LinkedIn.

Best New Startup of 2011: Pinterest, the social networking site which allows users to collect photos and products they love and create their own “pinboards".