This comes as a big relief to the bank which has not been able to enrol customers since January. “We thank the authorities for the approvals. We remain committed to the government’s vision of financial inclusion and banking for all," said a spokesperson of the bank.

In December last year, the UIDAI had temporarily suspended Airtel and its payments bank from conducting Aadhaar-based verification of its mobile customers as well as those of the bank using the e-KYC process after receiving complaints that it was opening payments bank accounts without the explicit consent of users. It was also alleged that government subsidies were being credited in these accounts without the knowledge of users.

The telco had deposited ₹ 2.5 crore as penalty with the UIDAI. It also credited back ₹ 138 crore of funds under the direct benefit transfer scheme to the original accounts of 5.6 million beneficiaries. Following this, the UIDAI decided to conditionally allow Bharti Airtel Ltd to resume Aadhaar-based e-KYC verification of telecom subscribers. However, the suspension of the e-KYC licence of Airtel Payments Bank was not revoked. 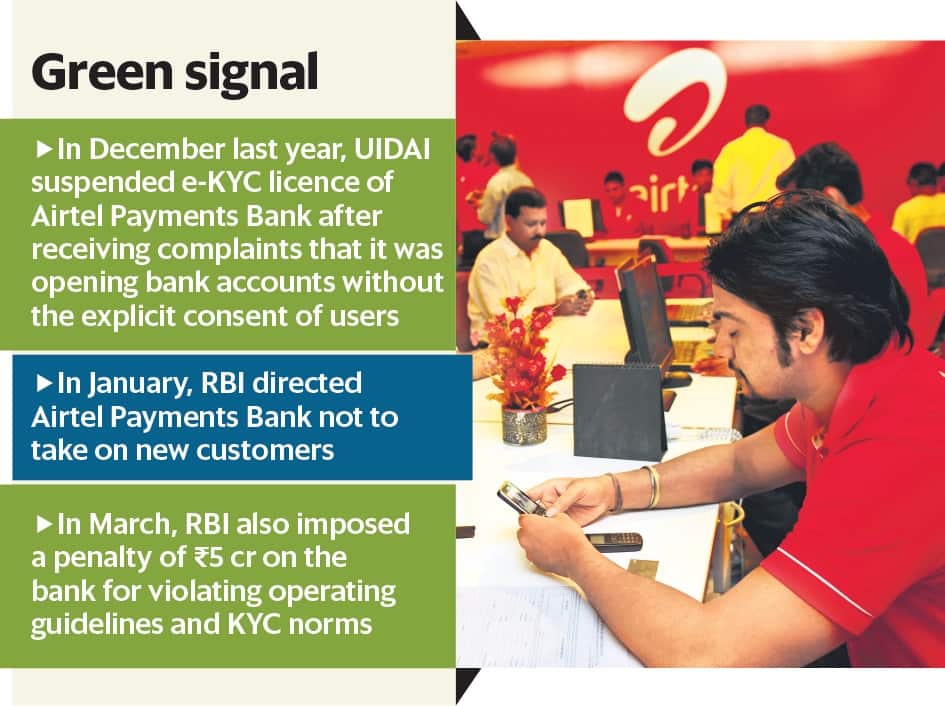 In January, RBI directed the bank not to onboard new customers. In March, RBI also imposed a penalty of ₹ 5 crore on the bank for violating operating guidelines and KYC norms. The fine was imposed after RBI scrutinized the bank’s documents relating to the opening of accounts without specific or clear consent from the customers. Airtel Payments Bank had denied any wrongdoing and streamlined its processes to comply with the regulations.

Payments bank is a differentiated bank providing a limited range of products, such as acceptance of demand deposits and remittances of funds. It can accept a restricted deposit, which is currently limited to ₹ 1 lakh per customer. However, these banks cannot issue loans and credit cards.