India GDP growth rate slumps to 5.7% in Q1 in challenge for economy

India GDP growth rate slowed to 5.7% in Q1 of 2017-18 on the back of destocking ahead of GST implementation and the lingering impact of demonetisation

New Delhi: India’s economic growth unexpectedly slowed to 5.7% in the June quarter, the slowest pace in three years, underlining the disruption caused by the uncertainty related to the rollout of the goods and services tax (GST) even as the Indian economy is struggling to recover from a shock demonetisation.

A survey of economists by Reuters saw GDP growth picking up by 6.6% in the June quarter. The gross domestic product grew 6.1% in the preceding three months. 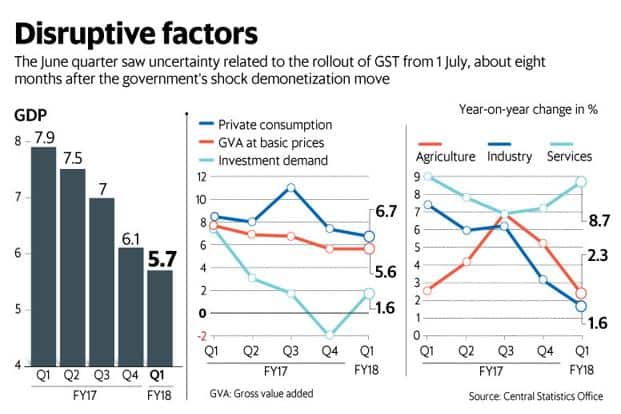 Finance minister Arun Jaitley said it is a matter of concern that GDP growth in the first quarter has slipped. “It throws up a challenge for the economy. In coming quarters we require—both in terms of policy and investments—to work more to improve upon this figure," he added.

The GDP print is quite shocking and indicates what could be a secular downturn in economic activity, said Abheek Barua, chief economist at HDFC Bank Ltd.

“I don’t see it as a transitory slowdown even though growth may pick up from its current level in coming quarters. Trends in factory output and capital goods point towards a fundamental loss in momentum," he said.

The slower pace of GDP growth also means India lost the tag of the world’s fastest-growing large economy for the second straight quarter to China, which grew 6.9%.

Uncertainty related to the GST rollout on 1 July, which came about eight months after the government cancelled 86% of the currency, saw manufacturers cutting production and dealers offering discounts on items such as cars. As a result, manufacturing growth slowed to 1.2% in the June quarter from 5.3% in the preceding quarter while mining activity contracted by 0.7%.However, construction activity revived marginally from the negative print (-3.7%) in the March quarter to 2% in the June quarter, signs that the impact of demonetisation is receding.

Trade, hotels, and transportation, impacted by demonetisation in the March quarter (6.5%), rebounded to grow 11.1%, mostly due to discount sales ahead of GST implementation. Growth in government spending held up close to double digits at 9.5%, continuing to support overall economic growth.

The pick-up in government expenditure was reflected by the latest Controller General of Accounts data which showed that the government exhausted 92.4% of fiscal deficit target within the first four months (April-July) of the fiscal year 2017-18.

While private consumption slowed from the March quarter, investment demand turned positive in the June quarter after contracting in the previous quarter.

Chief statistician of India T.C.A. Ananth said rising cost of intermediate goods and inventory drawdown in anticipation of GST implementation led to manufacturing growth falling sharply. “I expect a revival in the second and third quarters as manufacturers normalise their stock positions. But this will be subject to how well they have integrated with GST," he added.

The second volume of the Economic Survey released earlier this month said a raft of deflationary impulses is weighing on the economy, which is likely to miss the 7.5% upper band of its forecast growth range this year. The first volume of the Economic Survey released in January had projected growth in the range of 6.75-7.5% in 2017-18 against 7.1% in 2016-17.

The Survey warned that with monetary policy having been tighter than assumed and the rupee having appreciated against the dollar, the balance of risk has shifted to the downside and it is unlikely that the upper band of the projected growth rate will be achieved.

The central bank’s annual report released on Wednesday reiterated its forecast for gross value added (GVA) to grow at 7.3% in 2017-18, as against 6.3% in 2016-17. GVA, which is arrived at deducting net indirect tax from GDP, grew 5.6% in the June quarter, the same as in the March quarter.

At the same time, the report flagged risks such as an over-leveraged corporate sector and a stressed banking sector, because they could delay private investment demand revival. It also noted that farm loan waivers could add to upward pressures on inflation.

HDFC Bank’s Barua said another window for a rate cut may open though with a lag. “Once RBI is comfortable with the pick-up in inflation, which I expect not to be sharp, it may exercise the option of another policy rate cut," he added.