Home / Industry / Infotech /  A brief history of the Internet

A brief history of the Internet

Important landmarks in the evolution of the Internet as we know it today, with special emphasis on India

Much like the industrial revolution, the Internet revolution has changed the way people live, shop, socialize and work, and the way companies operate.

In the run-up to the 20th anniversary of the Internet on 9 August 1995 listing of Netscape’s shares on Nasdaq, Mint lists the important landmarks in the evolution of the Internet as we know it today, with special emphasis on India.

Here’s a timeline of how the Internet came to be along with some landmark events that redefined it:

1958: The US establishes the Defense Advanced Research Projects Agency (Darpa) in response to the USSR’s launch of Sputnik during the Cold War.

1961: Leonard Kleinrock at the Massachusetts Institute of Technology (MIT) publishes the first paper on packet-switching theory—a theory that comes into use later for sending data through the Web.

1962: J.C.R. Licklider of the MIT proposes the concept of a “Galactic Network", similar in concept to today’s Internet. Licklider is chosen to head Darpa’s research efforts.

1965: Computers TX-2 in MIT and Q-32 in California are connected via a telephone network. With the first wide-area computer network comes the realization that time-sharing works well, although not over telephone networks (circuit switching), but through packet switching.

1968: BBN Technologies wins a contract to build the first network switch. Bolt Beranek and Newman (BBN) was a group set up by former MIT professors and headed by Frank Heart.

1970: Packet-switched network Mark I is built to serve the NPL in the UK. Developed by Donald Davies, a Welshman and a colleague of Alan Turing while at NPL in the late 1940s.

1972: First program devoted to electronic mail (email) is created by Ray Tomlinson at BBN. The concept of ‘name@destination’ is created; Network Control Protocol (NCP) is also introduced to allow computers running on the same network to communicate with each other. First email sent out by Tomlinson is a test message; it isn’t preserved and he calls it insignificant, something like ‘QWERTYUIOP’.

1973: Vinton Cerf from Stanford and Bob Kahn from Darpa begin work developing TCP/IP (transmission control protocol/Internet protocol). The system would allow computers on different networks to communicate with each other. TCP/IP is heavily influenced by the French packet-switching network CYCLADES, which is decommissioned in 1981.

1974: Kahn and Cerf refer to the system as the Internet for the first time.

1976: The Ethernet is developed by Robert M. Metcalfe. It’s a way of connecting computers together in a local area network (LAN).

1976: SATNET, a satellite program, is developed to link the US and Europe. Satellites are owned by a consortium of nations, thereby expanding the reach of the Internet beyond the US.

1976: Queen Elizabeth II sends out an email from England promoting a new programming language developed by the British ministry of defence via Arpanet. Her username: HME2 (Her Majesty, Elizabeth II).

1983: TCP/IP becomes the standard for Internet protocol. 1 January 1983 for this reason is celebrated as the unofficial birthday of the Internet.

1983: Domain Name System is introduced to allow domain names to automatically be assigned an IP number.

1984: The number of hosts crosses 1,000. MCI Communications creates T1 lines for faster transportation of information over the Internet.

1989: The first link is established between Australia and NSFNET via Hawaii on 23 June. Australia was limited to USENET up until then.

1990: A hypertext system is created and implemented by Tim Berners-Lee while working for CERN (European Organization for Nuclear Research).

1990: Archie, the first search engine, is created at McGill University, Canada. Archie’s developer Peter Deutsch insists it is short for “archiver" and has nothing to do with the comic strip. Parker is disgusted when two follow-up search engines Veronica (Very Easy Rodent-Oriented Net-wide Index to Computerized Archives) and Jughead (Jonzy’s Universal Gopher Hierarchy Excavation And Display) are created.

1991: The US gives the nod to commercial enterprises to take off on the Internet; the first item to be purchased off the Internet was a Pizza Hut pizza in 1994.

1992: The Internet Society (ISOC) is chartered.

1993: InterNIC is released. It provides general services, a database and an Internet directory.

1993: The first Web browser, Mosaic (created by the National Center for Supercomputing Applications), is released. Mosaic later becomes Netscape. Erwise, a browser developed by Finnish students, was created a year earlier, but discontinued due to a lack of funding.

1994: Yahoo is founded as Jerry Yang and David Filo’s guide to the World Wide Web (WWW). It is incorporated a year later.

1995: WWW edges out Telnet to become the second most popular service.

1995: Registration of domains is no longer free; NSF sells them for an annual fee of $50 apiece.

1995: Netscape launches its initial public offering (IPO) on Nasdaq; the stock’s value soars to $75 from $28 per share on the first day of trading before closing at $58.25.

1998: The Internet Corporation for Assigned Names and Numbers (Icann) is created to oversee a number of Internet-related tasks.

1999: Wireless technology called 802.11b, more commonly referred to as Wi-Fi, is standardized. 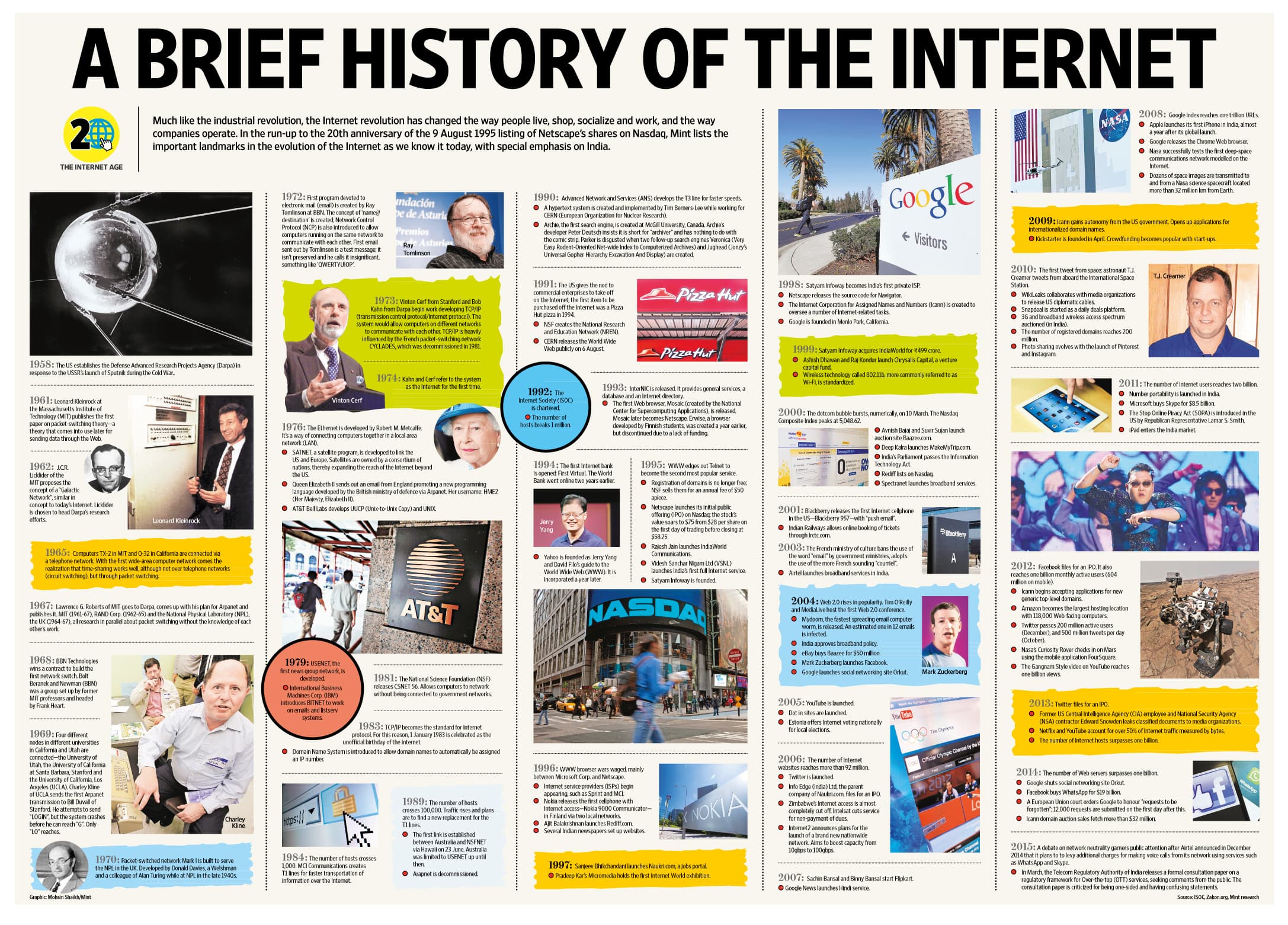 2001: Blackberry releases the first Internet cellphone in the US—Blackberry 957—with “push email".

2004: Mydoom, the fastest spreading email computer worm, is released. An estimated one in 12 emails is infected.

2006: The number of Internet websites reaches more than 92 million.

2006: Info Edge (India) Ltd, the parent company of Naukri.com, files for an IPO.

2006: Internet2 announces plans for the launch of a brand new nationwide network. Aims to boost capacity from 10gbps to 100gbps.

2008: Apple launches its first iPhone in India, almost a year after its global launch.

2008: Dozens of space images are transmitted to and from a Nasa science spacecraft located more than 32 million km from Earth.

2009: Icann gains autonomy from the US government. Opens up applications for internationalized domain names.

2009: Kickstart is founded in April. Crowdfunding becomes popular with start-ups.

2010: The first tweet from space: astronaut T.J. Creamer tweets from aboard the International Space Station.

2010: WikiLeaks collaborates with media organizations to release US diplomatic cables.

2010: Snapdeal is started as a daily deals platform.

2011: The Stop Online Piracy Act (SOPA) is introduced in the US by Republican Representative Lamar S. Smith.

2012: Facebook files for an IPO. It also reaches one billion monthly active users.

2012: The Gangnam Style video on YouTube reaches one billion views.

2013: The number of Internet hosts surpasses one billion.

2014: The number of Web servers surpasses one billion.

2014: A European Union court orders Google to honour “requests to be forgotten"; 12,000 requests are submitted on the first day after this.

2015: A debate on network neutrality gathers public attention after Airtel announced in December 2014 a decision to levy additional charges for making voice calls from its network using services such as WhatsApp and Skype.

2015: In March, the Telecom Regulatory Authority of India releases a formal consultation paper on a regulatory framework for Over-the-top (OTT) services, seeking comments from the public. The consultation paper is criticized for being one-sided and having confusing statements.

Subscribe to Mint Newsletters
* Enter a valid email
* Thank you for subscribing to our newsletter.
Topics
mint-india-wire 20-years-of-the-internet
First article
Close
Recommended For You
Feedback
Select your Category
Your Message
No Network
Server Issue
Internet Not Available