Bangalore: After nearly two decades of research, the Indian Space Research Organisation (Isro) will test its locally developed rocket engine when it launches its most advanced communication satellite on 15 April, a move expected to reduce dependence on Russian technology.

India’s geosynchronous satellite launch vehicle (GSLV-D3) will have a home-grown cryogenic stage engine, powered by liquefied oxygen and hydrogen, placing it in the league of five nations—along with the US, Russia, Japan and China—that own this restricted technology.

GSLV-D3 will hurl a 2.2 tonnes fifth-generation communication satellite, GSAT-4, which will be a test-bed for India’s satellite navigation programme and electric propulsion technology for powering deep space missions.

The launch will help Isro compete in the global commercial satellite launch market and reduce its dependence for rocket technology on Russia, which in 1993 went back on an agreement to supply rocket engines under US pressure.

Six years later, in 1999, Russia sold seven cryogenic engines to India. Isro launched three development flights using the Russian engine, of which one plunged into the sea in 2006.

“Ever since it started its space programme, India has always wanted to learn how to do everything itself," said Brian Harvey, an Irish author who has written books on the Chinese, Russian and European space programmes. “This is the hardest way to do things, but it ultimately pays off and enables India to build up its own engineering know-how." 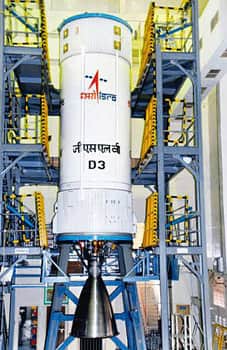 Home-grown: The GSLV-D3 has a locally developed engine, placing India in the league of five nations.

India plans to build a constellation of seven satellites that would help in accurately giving directions for vehicles and aircraft. The satellite will have electric motors or propulsion to keep it in orbit at 36,000km over the earth.

Why the Sensex Could Hit an All-Time High in August

How to read the signals from our call money market

Most Indian satellites have motors powered by liquid fuel stored in a tank. The electric propulsion will also reduce the weight of a satellite.

“All these are being tested for the first time (by India). It will be a big leap for us," said Isro spokesman S. Satish.

Euroconsult, a Paris-based consultant for the satellite and space sector, said testing the Ka-band transponder would help Isro reuse the frequency several times across different places and use bandwidth much more efficiently.

“As of today, Ka-band is used mostly in the US. India will be the next country that is looking at larger use," Rachel Villain, director (space and communications) at Euroconsult, said over phone from Paris.

Euroconsult sees around 1,185 satellites, including 115 communication ones, to be launched globally by 2018. Of this, governments are expected to launch 770 satellites.

Market revenue generated from the manufacturing and launch of these satellites is forecast to reach $178 billion (Rs7.9 trillion) for 2009-18, according to Euroconsult’s just-released Satellites to be Built and Launched by 2018, World Market Survey.

“The market for small (two-tonne) satellites is small. It is not growing so much," said Villain. “Most of the satellites are more than four tonnes."

India is building a successor rocket GSLV-MkIII, which has capability to launch satellites of up to four tonnes. Isro aims to launch this rocket in 2011-12.