Mumbai: Indians have a new love: sports utility vehicles (SUVs). But have they steered clear of their older fascination for small cars?

While that’s not clear, data provided by industry lobby Society of Indian Automobile Manufacturers (Siam) and analysed by Mint does highlight a new trend—a declining preference for small cars in the last three fiscal years. 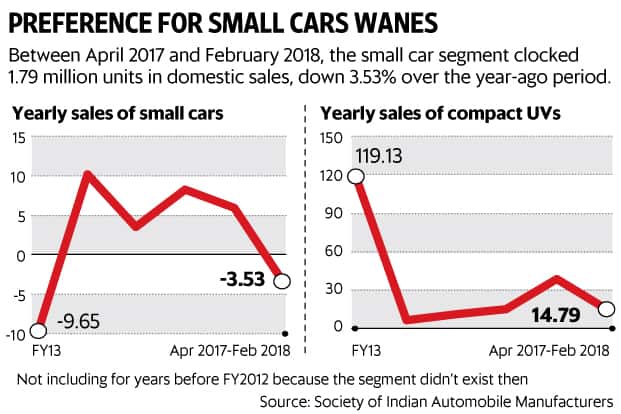 The facts that underpin this trend are compelling.

In a country where per capita incomes have risen in the high single digits year-on-year since the beginning of the decade, the desire to ride tall on potholed and congested roads has grown stronger, while the number of first-time buyers—who typically favour small cars—has not expanded at the same pace. This segment still forms about a third of the total market.

Compact SUVs, on the other hand, have outperformed the broader passenger vehicles industry, which grew 8.04% to 2.98 million units during the same period last fiscal.

“The immediate future is of small SUVs because of better practicability, better road presence. There isn’t much difference in mileage when you do a model-to-model comparison," said Deepesh Rathore, London-based co-founder of consulting firm Emerging Markets Automotive Advisors.

“We have to take into account that the compact SUV segment did not exist until a few years ago. Those buyers were with compact cars or entry-level sedans, and they were making a compromise. (Renault India Pvt. Ltd’s) Duster and the Ford EcoSport came first, but the segment has exploded with Creta and Brezza. We are seeing a huge shift," Rathore added.

Compact SUV sales have been growing in the double digits almost every fiscal since 2012-13, when the price difference between petrol and diesel rose to as much as Rs30 per litre. Diesel vehicles offer higher fuel economy at lower cost for individuals who commute more than 50 kilometres a day. That, coupled with a strong consumer preference for models with higher ground clearance and differentiated styling at reasonable price levels has led to a surge in compact SUV sales.

The trend itself becomes clear when one looks back at the recently concluded New Delhi Auto Expo, where Maruti Suzuki adopted a Concept Future S design language for its small cars to offer SUV-like comfort and feel. Rivals such as Hyundai, Mahindra and Mahindra Ltd and Tata Motors Ltd too beefed up their SUV portfolios with near negligible focus on small cars.

According to a top executive at one of the top passenger carmakers, the impact on the growth of compact cars is largely because of a slowdown in sales of entry-level models such as the Alto, Eon, WagonR, Datsun Go, and Kwid. The entry-level car segment clocked 523,525 units from April-February, down 2.42% from the year ago.

“Since income levels have increased, people go to the Baleno and Swift category instead of stopping at an Alto. Easy EMIs allow them to upgrade to the next level, which is small SUVs, since the compact sedan segment is a compromise," the executive said.

“The trend will continue since emission and crash norms will increase the price of small cars and that is visible in the global markets, where you do not find small cars. This is changing the dynamics," the executive added.

Going forward, experts expect compact SUVs to grow at a faster clip while conceding that hatchbacks will continue to corner a part of the market owing to first-time buyers across geographies.

“Some models will have to wind up. That is truer for the small hatchbacks. If you look at the compact SUVs, they are a recent phenomenon and they are equipped to meet the new norms," said Jnaneswar Sen who served as senior vice-president (sales & marketing) at Honda Cars India Ltd until Friday.

“The market is moving up. Two-three things have happened. One is that mass motorisation has not happened, where you have a huge number of first-time buyers. Only one-third are first-time buyers. Replacement demand is far bigger than first-time buyers. As a consequence, people tend to upgrade and of course SUVs also have this advantage of aspiration," Sen added.