Consumption growth in rural India has outpaced urban consumption by the widest margin in five years, encouraged by good rainfall and increase in government spending on infrastructure

Mumbai: Consumption growth in rural India has outpaced urban spending by the widest margin in five years, encouraged by relatively good rainfall last year and an increase in government spending on infrastructure.

Rural consumption rose by 9.7% in the year ended 31 March, faster than the 8.6% growth in urban spending, according to market researcher Nielsen. A year ago, rural growth outpaced urban spending by less than half a percentage point.

“If we look at growth in volume terms, we have reached the peaks last seen five years ago. Volumes were growing at about 10% then," Sameer Shukla, executive director at Nielsen India, said in an interview earlier this month. 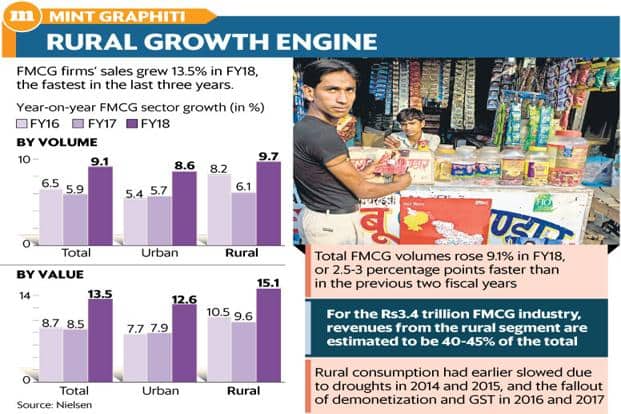 The faster pace of rural growth, if it sustains, is good news for India’s consumer goods companies. Rural consumption had slowed due to droughts in 2014 and 2015, and the twin disruptions of demonetization in November 2016 and implementation of the goods and services tax (GST) from 1 July in the following year, hurting sales of companies such as Hindustan Unilever Ltd (HUL), the nation’s biggest household goods maker.

Things have improved in the latter half of the last fiscal year, with consumer goods companies reporting faster growth.

Fast-moving consumer goods (FMCG) companies grew sales at 13.5% in the year ended 31 March, the fastest pace in last three years, according to Nielsen data. The growth was led by volume growth, which rose 9.1%, or almost 2.5-3 percentage points faster than the previous two years, according to the data.

For India’s Rs3.4 trillion FMCG industry, revenues from the rural segment account for 40-45% of the total, according to Crisil Ltd. The analytics and ratings company expects rural revenue to grow 15-16% in the current fiscal year. This is higher than the 10% growth estimated for fiscal 2018 and the 5% reported in fiscal years 2016 and 2017. Growth in revenue from urban areas is expected to remain steady at 8%, said Crisil.

This is comparable to the growth seen in the early years of the current decade, when the FMCG industry was growing at a rate of 18-20% on average, said Shukla. In those years, volume growth was in the range of 10-12% and inflation was in high single digits, he said. Retail inflation in fiscal years 2013 and 2014 was close to 10%. Since fiscal 2015, inflation has been slowing; in fiscal 2018, it fell to 3.58%, the slowest in six years.

To be sure, growth may slow down this year. Following the implementation of goods and services tax (GST) in July, prices of FMCG goods across most categories from detergents to shampoos to skincare and home care products were reduced as tax rates were lowered from 28% to 18%. “In the last couple of quarters, manufacturers were giving a lot of promotions. So, volumes were buoyant for a short period," said Shukla. Volume growth may not be at the same level in fiscal 2018 as fiscal 2017. “But it will definitely not fall to what we have seen in 2014-15 or 2015-16," he added.

Even Sanjiv Mehta, managing director and chief executive officer of HUL, which recorded 11% volume growth in both the December and March quarters, is cautious.

“We should wait for a couple more quarters to see whether it’s sustainable," Mehta told reporters after announcing HUL’s earnings for the March quarter on 14 May.