New Delhi: India Post Payments Bank (IPPB) launched on Monday by the Union finance minister Arun Jaitley is the second payments bank to commence its operation in the country after Airtel Payments Bank (APB), which was launched on January 12.

IPPB has been set up as a 100% Indian government-owned public limited company under the department of posts with the aim to open around 650 new branches in postal district headquarters.

Currently, the department of posts has an existing network of around 1,55,000 post offices. The new branches will be co-located with the existing post offices.

On Monday, it launched services on a pilot basis in Raipur and Ranchi.

APB, on the other hand, is a joint venture between phone services provider Bharti Airtel Ltd and Kotak Mahindra Bank Ltd. The payments bank went live with a network of 250,000 banking points. In the pilot phase, the bank added over 1 million customers, according to a statement by the company.

As mandated by the Reserve Bank of India (RBI), the new model of banking focuses on providing basic financial services such as all kinds of payments; including social security payments, utility bill payments, remittance services, current and saving accounts up to a balance of Rs1 lakh, distribution of insurance, mutual funds, pension products and acting as business correspondent to other banks for credit products especially in rural areas and among the underserved segments of the society. 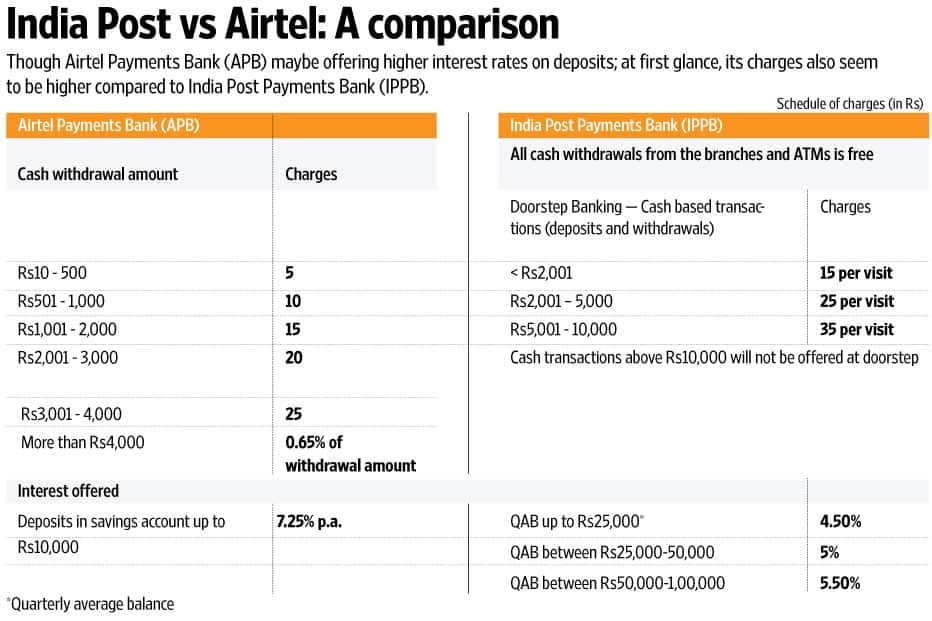 Only transactions up to Rs10, 000 is permitted through AEPS which is free. According to IPPB, banking charges at branch and doorstep for each NEFT based transaction ranges from Rs2.5-5 and Rs5 is charged for every transaction via IMPS.

Customers of IPPB can withdraw amount up to Rs10,000 from an ATM in a single transaction and up to Rs25,000 per day. APB, on the other hand, has set Rs10 as the minimum cash withdrawal amount, there is no clarity on the upper limit to cash withdrawals.