Thanks for Visiting Mint
You seem to have an Ad Blocker on. Please turn it off in order to continue, or whitelist Mint
HOW TO TURN OFF AD BLOCKER
OR
REFRESH IF YOU ALREADY TURNED OFF THE AD BLOCKER
Home >Industry >Infotech >Immigration Bill to hurt Indian firms despite US hiring spree

Immigration Bill to hurt Indian firms despite US hiring spree

Bangalore: The US immigration Bill, which could disrupt the traditional business models of Indian information technology (IT) companies such as Tata Consultancy Services Ltd (TCS) and Infosys Ltd, ironically favours firms that created fewer jobs in the US in the past decade than their Indian rivals, according to JPMorgan India Pvt. Ltd. 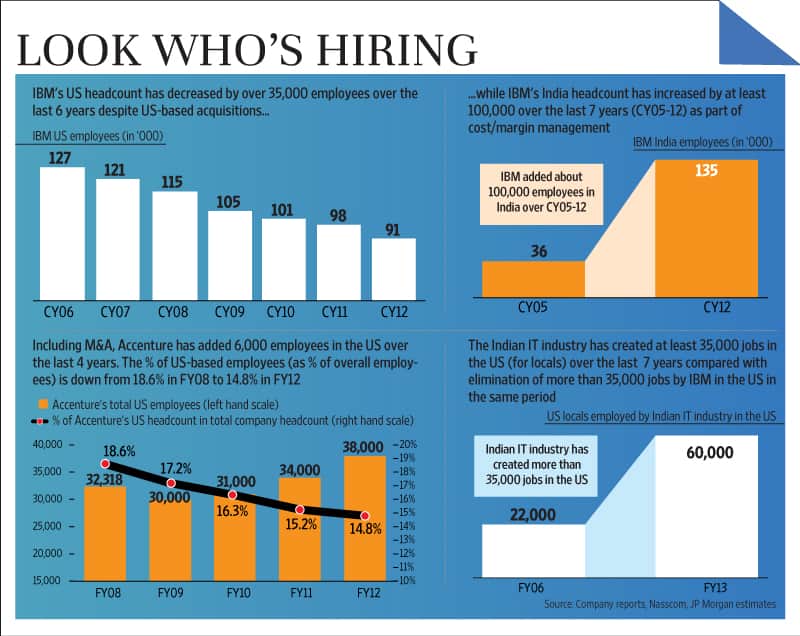 “This decline is seen despite IBM’s ongoing acquisitions in the US over this period. What bears additional mention is that IBM’s headcount in India has significantly ramped up over this time-frame," JPMorgan India analysts Viju George and Amit Sharma said in a 23 July research note.

Similarly, Dublin-based Accenture Plc. has only marginally increased its US headcount over the past six-seven years while simultaneously increasing its employee headcount in India. Its India employee headcount, at 75,000, is nearly twice the number it has in the US.

“Again, as with IBM, Accenture’s India staff has nearly tripled in the past six-seven years while its headcount for US citizens has probably only marginally increased (or even stayed flat) despite US-based acquisitions. Its US employee base is now less than 15% of its total employee base," the JPMorgan report said.

In contrast, India’s $108-billion information technology (IT) industry added 107,000 jobs in the US in the 2006-11 period, of which 30% were created for US citizens, according to estimates provided by Nasscom, the industry lobby representing Indian IT companies.

“Analysis of data suggests that in past seven years or so, the Indian IT industry has been a reasonable creator of jobs (30,000-40,000) for US citizens (not counting the significant green card/in-process green card holders)," the JPMorgan report added.

Many Indian firms have discussed a conspiracy theory behind this Bill and blamed intense lobbying by American firms.

In May, Bloomberg reported that at least three American lobbyists who are veterans in the technology industry confirmed the role of several American software firms in pushing for these proposals.

In a year, when India’s software export revenues grew at its slowest pace—10.2%, according to Nasscom —since the 2008 global financial meltdown, and two of the top three Indian software firms, Infosys and Wipro Ltd, have struggled to recapture double digit growth rates and are undergoing the biggest organizational transitions in their history, these proposals are bound to affect growth rates even further.

IBM is estimated to have around 150,000 employees in India, more than any other IT company except TCS, according to the report.

“As part of ‘workforce balancing’, IBM has been continually rationalizing its employee head-count in the US, while rapidly scaling it up in India and other lower-cost locations," JPMorgan said.

“If you look at US-based IT firms, their ratio of US and Indian workforce has undergone a major shift over the years. They’ve hired over 60,000-80,000 people in India and reduced an equal number of people in the US, while Indian companies have done the reverse," said Ameet Nivsarkar, vice-president at Nasscom.

TCS currently employs 277,586 employees worldwide, according to its latest quarterly report. On 31 March, Mint reported that TCS had overtaken Accenture to become the world’s second-biggest IT services employer. IBM employs nearly 300,000 people in its services business.

The immigration Bill, which is being pushed by US senators and is expected to be passed into law in early 2014, will double visa-application related costs for top Indian software services firms such as TCS, Infosys and US-based Cognizant Technology Solutions Corp., which has most of its 162,700 employees in Chennai.

The Bill, if passed in its current form, will force Indian software exporters to remove professionals on H1B work permits from on-site client locations in the US and force companies to file fewer visa petitions effective October 2014, as the cost per petition would go up by about $5,000.

Such a move would cause significant disruption to the business models of Indian IT firms such as TCS, Infosys and Cognizant, which get more than half their overall revenue from North America.

The Bill will also increase the wages of workers on H1B permits by 5-15%, according to a June report by technology researcher Gartner Inc.

“The biggest impact of the Bill will not just be on the providers but the client community as well, because firstly that would trigger a mad rush for local recruitment among the meagre number of resources available in the US and they’ll obviously be hired at higher salaries," said Arup Roy, research director at Gartner. “So, in a short span of time there will be a significant increase in costs, which of course will have to be borne by the companies."

Most top Indian IT firms, such as TCS, Infosys and Wipro have said that the immigration Bill, if passed in its current form, will impact their near-term revenues and profits.

“If those provisions are signed into law, our cost of doing business in the United States would increase and that may discourage customers from seeking our services. This could have a material and adverse effect on our business, revenues and operating results," Infosys said in a regulatory filing to the US Securities and Exchange Commission in May.

The visa reform will prevent top Indian outsourcers from deploying engineers on short-term projects at client locations. These short-term projects are usually delivered on-site as part of a larger outsourcing contract and are deemed crucial for the success or failure of such a contract.

“The immigration Bill (passed by the Senate) puts IBM & Accenture (and perhaps other US firms) at disproportionate advantage vis-à-vis the Indian IT industry. But these firms’ track-record of job creation in the US over a reasonable timeframe does not seem to square up with the one of the Bill’s noble intents," the JPMorgan report said.

The landmark Bill, which has already been approved by the US Senate, is currently being reviewed and is awaiting approval by the House of Representatives.