Even a lottery win won’t stop stressed Indians from working

Bengaluru: Is it possible to love working so much that you would want to work even after you won a big fat lottery? Apparently yes. The findings of a recent study show that Indians are much more enthusiastic about their work than their counterparts in the US and UK.

Tech company Adobe Systems Inc. studied over 2,000 employees across the US, UK and India. It found that 98% of the Indians surveyed wished to continue work even if they won the lottery compared to 80% workers in the US and 67% in the UK.

One of the reasons for this attachment to work is because a majority of Indians see their work as a measure of being successful and also a definition of who they are, said experts.

On average, 70% of those surveyed loved their job (which means the sample is probably biased in the kind of people surveyed and the companies they work for), but in India that number is much higher at 83%. 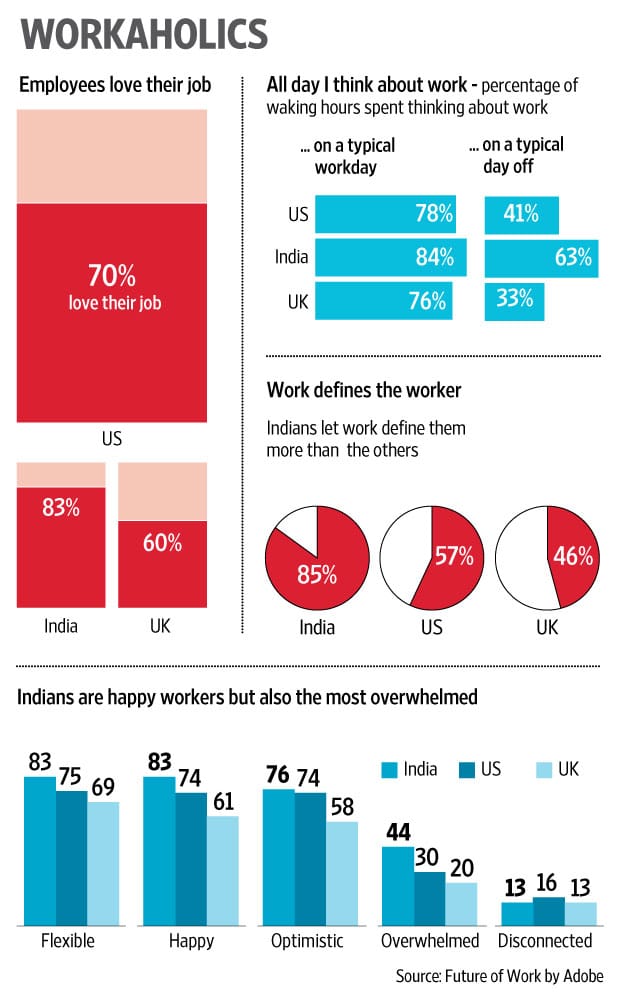 Indians also tend to think about their work much more than those in the West. Sixty-three percent of Indians surveyed said they think about their jobs even on their days off, while only 30-40% of people in the US and UK say they do this.

So what’s behind this obsession with work for Indians?

It has a lot to with our culture, said Kevin Freitas, director, HR at mobile advertising technology firm InMobi Technologies Pvt. Ltd.

For example, a common conversation starter even in a social setting is: “Where do you work? If you compare this to other countries, they (conversation starters) tend to be around what movies you like, or where you holiday or what sport do you play. But we seem to have an obsession about our jobs," said Freitas.

This obsession isn’t healthy, and the survey shows that too. As much as Indian love their jobs, they are also the most overwhelmed.

The study found that 44% of Indians felt overwhelmed at work, while about 20-30% felt that way in the two western countries.

A separate study by consultancy Randstad showed that 40% of the respondents from India reported that they work more than 45 hours per week. Millennials in India work much longer than their peers in other countries. Indian millennials pull in an average of 52 hours a week, while those in the US, and even Japan put in 45-46 hours a week, showed a study by Manpower Group.

“Indians work much longer than those abroad because they tend to put their personal needs after organizational needs," said Jaleel Abdul, vice president of people resources at Adobe India.

“Work stress has become a reality in the era and the economy we live in. Mobile phones are like a mobile workstation and you never switch off," added Jaleel.

Shyam Bhat, a psychiatrist based in Bengaluru, said that many people in India today derive their sense of self-worth and meaning from their careers, and from success in their chosen profession.

“Rather than increasing their happiness (from work), this over-identification with the work role leads to the exclusion of other roles, and in fact causes more psychological stress," said Bhat.

He also blamed companies for some of this. “ The Indian corporate culture does not appreciate boundaries between work and personal life, leading to stress," he said.

That may be counter-productive.

Over the long term, organisations that respect and appreciate the emotional aspects of their employees will always outperform those that have unwittingly created emotionally harsh cultures, Bhat added.