Thanks for Visiting Mint
You seem to have an Ad Blocker on. Please turn it off in order to continue, or whitelist Mint
HOW TO TURN OFF AD BLOCKER
OR
REFRESH IF YOU ALREADY TURNED OFF THE AD BLOCKER
Home >Industry >Manufacturing >Eicma 2017: Royal Enfield, Hero MotoCorp show global ambition in Milan

New Delhi: Indian motorcycle companies Royal Enfield and Hero MotoCorp Ltd have taken the Eicma 2017 in Milan by storm with a play of design nostalgia that could see them making inroads into the international markets.

In a show of strength, Siddhartha Lal-run Enfield announced the return of one of its best-loved classics from the 1960s—the Interceptor. Lal also introduced a 650cc Continental GT, which will compete with the Harley Davidson’s Street 750 series. Both are powered by Enfield’s newly developed 650 cc engine, called the Twins.

“We are trying to capture the essence of those bikes—the image, lifestyle and freedom. Interceptor was designed for a period of the end of the 1960s. It was designed for the American markets; it was fun and aimed at young Americans with money. We are a little anti-social and that is kind of cool and we like that," Mark Wells, head of strategy at Royal Enfield, said in a video on the company website.

Lal believes that the world is “converging towards mid-sized motorcycles" (between 250cc to 750cc) and that the Twins will strengthen Royal Enfield’s position in that segment.

Both the Interceptor and Continental GT, Lal told PTI, will be first introduced in Europe in April followed by other regions such as South East Asia and Latin America.

Equally, domestic heavyweight Hero MotoCorp has tried to carve a niche for itself in Milan. Far from its legacy of making fuel-efficient bikes, Hero unveiled the concept of an adventure bike called Xpulse that will help it expand further into higher engine capacity segments. 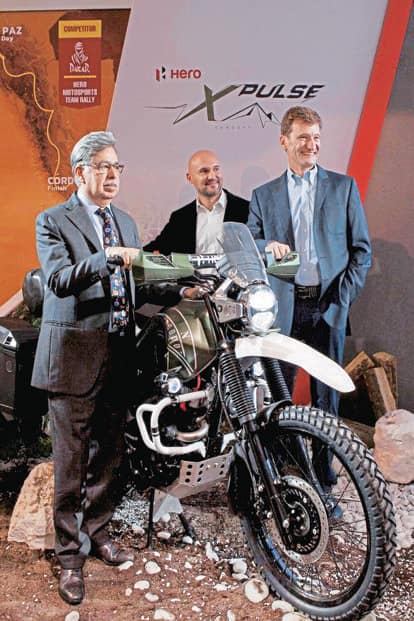 “We are constantly developing concepts for the future—keeping in mind global trends and customer aspirations. I am sure the adventure concept motorcycle XPulse gives you a directional guidance on the path that Hero is going to ride on in the future," Pawan Munjal, chairman and managing director, Hero MotoCorp, said in a statement.

Hero also announced its plan for the Dakar Rally 2018.

At Dakar 2018, the team will field three riders, one more than last year. Oriol Mena from Spain has been inducted into the team as part of Hero MotoSports’s plan to train and develop young rally riders from across the globe. He will join the existing team consisting of C.S. Santosh and Joaquim Rodrigues.

The Dakar Rally is world’s toughest motorcycling competition and tests the mettle of companies, their technologies and riders.