Pricing pressure, limited use of automation and cross-currency volatility reasons for decline in revenue per employee

Bengaluru: The revenue per employee of Indian IT services firms declined over the last 12 months, even as Nasdaq-listed Cognizant Technology Solutions Corp. saw an increase in this important metric—a measure of efficiency as well as the kind of work a company does.

Cross-currency volatility, pricing pressure for outsourcing deals, and limited use of automation tools are three underlying reasons behind the decline of revenue per employee at three of India’s largest IT services firms, including Tata Consultancy Services Ltd (TCS), Infosys Ltd and Wipro Ltd. The three firms together generated more than $33.4 billion in revenue and employed 720,799 people at the end of March 2016.

Although TCS reported a revenue growth of 11.9% in constant currency terms for the year ended March, its actual reported growth was only 7.1%.

India’s third largest software firm, Wipro, which reported a 3.7% growth in 2015-16, was hit by pricing pressure, according to a few equity analysts. Wipro’s revenue per employee declined 5.1% to $42,485.

Infosys, which under its first-non-founder chief executive officer Vishal Sikka has been most outspoken on improving revenue productivity by automating basic tasks which until now have been done by its engineers, too saw a marginal decline of 0.9% in revenue per employee to $48,963. A mix of cross-currency fluctuation and pricing pressure was the main reason behind this decline in revenue productivity.

“Automation will take time and, as of now, we are still very early in our journey," Sikka said in a 15 April interview.

Experts agree with Sikka that most Indian IT firms are still figuring out how to use automation, and it will take at least a “few years" before any significant impact is seen.

Automation is happening in these companies in “very small pockets", said a Mumbai-based analyst at a domestic brokerage who spoke on condition of anonymity. “Any significant impact can be visible only once a lot of projects, involving, say L0 (basic support work called Level Zero), have been automated. This is still a few years away."

Infosys under Sikka has come out with its own metric to evaluate the productivity increase by measuring revenue per FTE (full-time equivalent). The FTE metric measures revenue generated by employees working on a project, unlike the traditional method of tracking revenue per employee that takes into account all employees, including engineers who are on a bench or undergoing training. 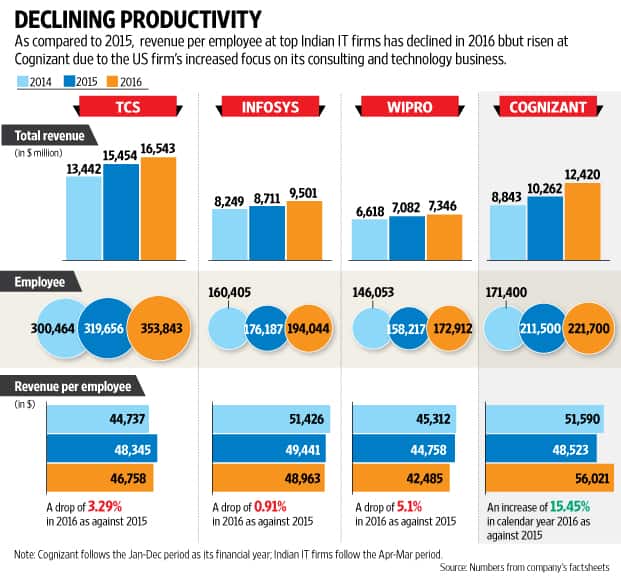 “The hiring cycles are still longer and therefore the number of employees we’re adding to the company is significantly higher. There is also a secular downward pricing pressure in the industry that affects everyone," Sikka had said in the interview. “These are continuing to dwarf the effect of automation and the effect of innovation. But I continue to be confident that over the 2020 horizon, we will get to that aspirational goal of $80,000 FTE, but for the last four quarters or so, this number is actually going in the other direction, and one of our endeavours this year is to ensure we work to reverse this trend and then it starts to change for the upwards."

“DeepDive’s research strongly suggests that the revenue per employee of large Indian firms is being hurt by pricing, which is under pressure partly due to IT services firms more aggressively using price to try to gain market share," said Bourgeois.

He added that “automation’s ability to increase revenue per head has been substantially over -hyped by IT services firms" and, for now, the level of automation technology is “too small to move the needle on overall industry profitability".

The performance of the three companies is in contrast to that of Cognizant, which managed to drive up revenue productivity by over 15% in 2015. The company now generates about 58% of its revenue from consulting and technology businesses, with the remaining 42% business coming from the outsourcing work—one reason behind this increase in revenue productivity.

At the end of 2013, Cognizant’s revenue split was about even. The acquisition of healthcare specialist TriZetto Corp., which has about 3,000 employees, has further helped Cognizant improve its revenue productivity. Cognizant follows the calendar year as financial year, unlike the Indian IT firms which follow April-March as the fiscal.

Some experts like Bourgeois say that Indian IT firms need to effect more buyouts if they want to improve their revenue per employee. “To really alter revenue per employee, Indian firms must substantially change their business mix by moving up the industry’s food chain or by adding software revenues. Ultimately, I think acquisitions of software businesses will be needed for large Indian service firms to really increase revenue per employee," said Bourgeois.