IDFC Alternatives to create a platform for renewable energy assets

The platform will work as a board-run entity and a professional team will manage its daily affairs, said Aditya Aggarwal, partner (infrastructure), IDFC Alternatives

The platform will work as a board-run entity and a professional team will manage its daily affairs, Aditya Aggarwal, partner (infrastructure), IDFC Alternatives.

IDFC Alternatives, a unit of infrastructure-focused lender IDFC Ltd, is currently expanding its team with senior executives. The company had previously created such an aggregation platform in the roads sector which has now grown into a 20-member team.

IDFC is currently investing out of its second infrastructure fund wherein it picks controlling or a 100% equity stake in operating infrastructure assets. The firm has already committed over $325 million and is looking to deploy an additional $300 million over the next one year, he added. “Our approach would remain the same; we are looking to aggregate controlling stakes in operating capacities under an experienced technical team," Aggarwal stated. “The beauty of renewables is that it offers opportunities across investment sizes and based on our strategy of accumulating projects and the benefit of a common operating platform, we are happy to evaluate opportunities sized anywhere from 10 MW to 1,000 MW." 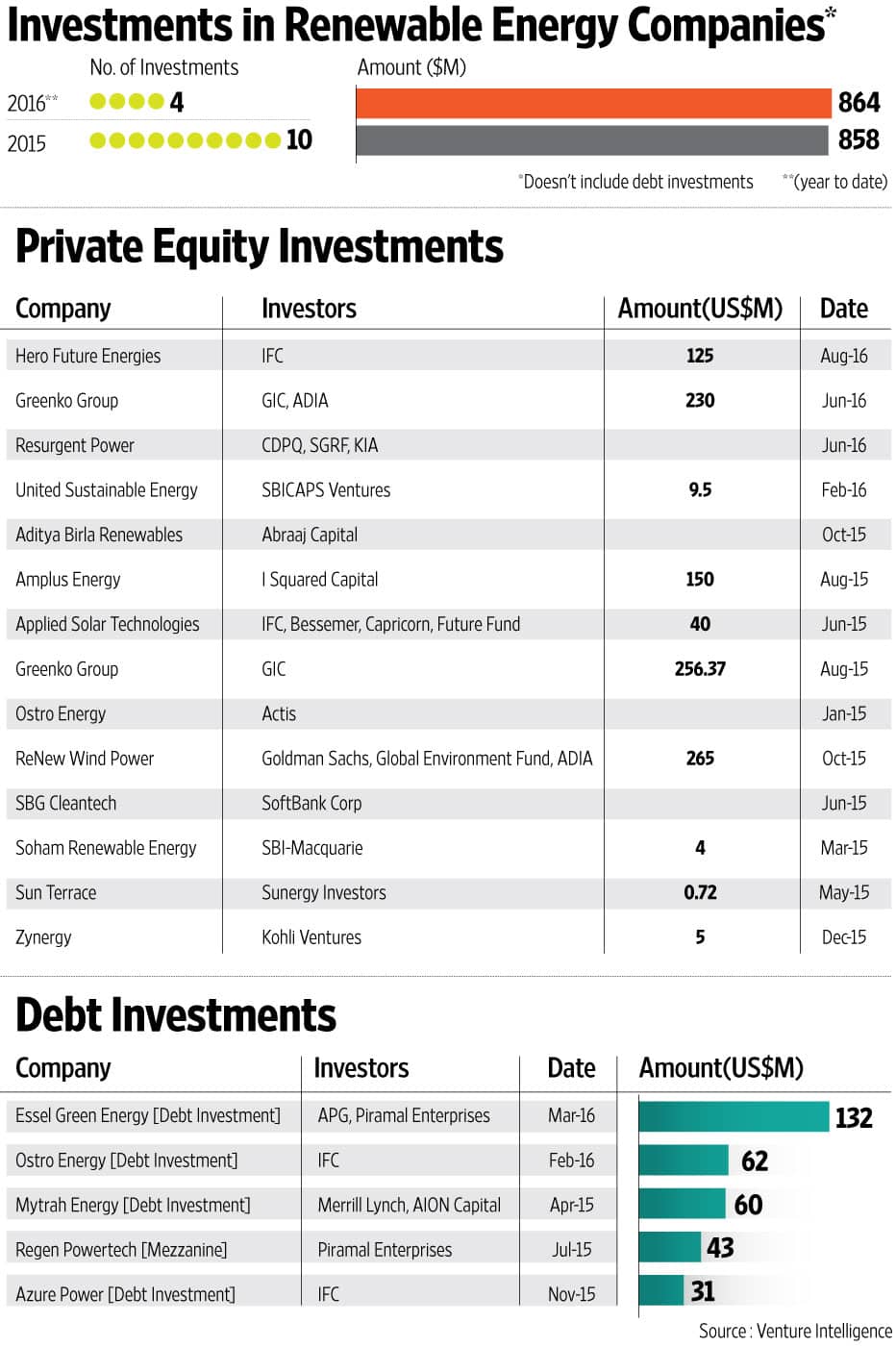 IDFC was among the early firms who invested in renewable energy projects in India. It backed Mytrah Energy Ltd in 2011. At that time, Mytrah was sub-100 megawatt (MW) company.

“However, with renewables as a sector coming on to investor radars and large capital started chasing a small set of opportunities, the risk-reward pay off became unbalanced in the last couple of years. Large portion of the valuations in the recent past have been driven by growth projections akin to the 2010 frenzy in conventional energy. We have stayed cautious throughout this phase and are now seeking to take up operating projects with developers that are looking to churn their invested capital. From our perspective, we see ourselves as complementary to the growth capital being deployed since we would only be investing in operating capacities. Our selection criterion is the risk-reward payoff and distributable cash flows rather than capacity," he said.

The company is targeting acquisitions of 250 MW of operating wind, solar and small hydro capacity by end of 2016 and upwards of 600 MW over the next 18 months.

“Our sweet spot on our own (investment size) is anywhere from $100 million to $150 million but if there is a trade which is available any where in this space for $400 to $500 million, then we have additional capital available to us from our LPs (limited partners or investors) by way of co-investments," he added.

While commenting on exit options, Aggarwal added, “currently we are in the investing phase of our fund. We are at least 5 years away from harvesting our investments. We could exit through traditional exit routes such as a strategic sale, sale to institutional annuity seekers or even as a feeder into an InvIT (infrastructure investment trust). We will take a call at the appropriate time over the next few years."

In the last two years, the renewable energy space, especially solar and wind power, has seen a lot of private capital flowing in. Recently, Greenko, which is a developer of wind and small hydro power projects, secured $230 million from sovereign wealth funds of Abu Dhabi and Singapore. Tata Power Ltd inked a deal to buy Welspun’s renewable energy assets at an enterprise value of $1.4 billion.

IDFC Alternatives also agreed to buy about 275 megawatt of operational solar assets from ACME Solar, Mint reported citing sources in June. ACME Solar has a portfolio of about 1.5 gigawatt of solar capacity, of which about 400 MW is operational. Aggarwal declined to comment on the ACME deal.

Meanwhile, the government is also setting up a $1.25 billion fund, which will be backed by state-run as well as private institutions, to fund renewable energy projects. State-owned institutions such as Power Finance Corp. Ltd and Rural Electrification Corp. Ltd have already committed a total of $300 million to the fund.

“Renewables has certainly sustained and picked up from conventional energy in the past few years and with the government’s focus of taking installed capacity to 160 GW, large volumes of capital would be required over the next five years, a majority of which is expected to come from financial investors," Agrawal said.