Thanks for Visiting Mint
You seem to have an Ad Blocker on. Please turn it off in order to continue, or whitelist Mint
HOW TO TURN OFF AD BLOCKER
OR
REFRESH IF YOU ALREADY TURNED OFF THE AD BLOCKER
Home >Industry >Arcade gaming idea bats on a good wicket during a downturn

Arcade gaming idea bats on a good wicket during a downturn

Arcade gaming idea bats on a good wicket during a downturn

Mumbai: Had they not stayed up nights playing racing games instead of poring over textbooks in exam season, Puneet Kumar and Vaibhav Goel may not have turned entrepreneurs. In 2008, the two submitted an arcade gaming idea in a business plan competition that not only won the first place, but also angel investment from a jury panellist to turn the plan into a full-fledged venture.

“We never used to study, but stayed up till 5 or 6 in the morning working on the gaming machine," recalls Kumar. He and Goel, students of the Indian Institute of Technology, Bombay, had been working on the prototype for nearly a year before winning Eureka, the college’s annual B-plan contest. But it was the initial funding of Rs56 lakh from Indiagames Ltd CEO and founder Vishal Gondal that helped them turn the idea into more than a hobby project. 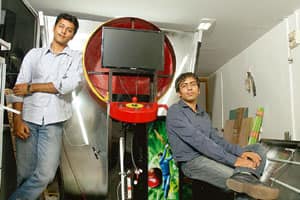 E-cricket: GaMa Entertainment Systems directors Puneet Kumar (left) and Vaibhav Goel at their Mumbai workshop. The firm will launch its first product, an arcade game based on the T20, later this month. Ashesh Shah / Mint

Since then, the company has been working on building a proprietary technology platform called ARCtic to convert any third-party computer game into arcade gaming format.

The company will launch its first product, a cricket arcade game based on the Twenty20 (T20) format adopted by the Indian Premier League (IPL), later this month. A gamer plays as a batsman for the Indian team against an opponent, with two overs to achieve the target score before the cricket match ends.

Players win redemption coupons based on the number of fours and sixers they score. “One can play games on the PC for an hour, but an arcade game is typically one to three minutes and works on different stimulus," says Kumar.

GaMa licenses the PC-game from the vendor, adapts it to arcade format and builds the hardware kiosk around it. The finished product is a gaming machine that it plans to sell at about Rs3 lakh to family entertainment centres (FECs) that own gaming zones at malls.

The firm plans to approach more gaming zones after its formal launch at a national-level exhibition organized by the Indian Association of Amusement Parks and Industries. Interestingly, the idea that won the competition was not a cricket game, but a racing machine that could simulate motions of a real-life motorbike.

The prototype the duo had been working on was a bike seat based on pneumatic controllers that used mechanical energy instead of electric motors, that could potentially bring down costs by five times.

However, it could not find a suitable software partner for the project. Around this time, the first season of the IPL began and GaMa decided to encapsulate the game into its first product. The change in strategy early on is proving beneficial, says the company, as there are no arcade games dedicated to T20 cricket.

Taking the used-car route in a downturn

Polynesian-themed solace in a slowdown

Doggedly importing products for pets in the face of slowdown

Upside to the downturn in financial services

In the current market, however, many investors are focusing on utilitarian sectors such as health care, education and infrastructure. Even Eureka, which GaMa won last year, was dominated by business plans for energy conservation and cost efficiency this time. But Gondal is optimistic. “Had they made another racing game, it would have been very challenging to sell it to FECs, (since) there are five other games in the market," he says. “A lot of times, entrepreneurs are stuck on one idea, and it’s very difficult to see a business plan in a competition translate into a company."

He wants the company to demonstrate proof of concept and validate the business model, albeit in a small way, before it seeks further funding.

GaMa plans to expand the current joystick-operated game further. It is working on a prototype that allows a gamer to wield a real bat within a simulated cricket pitch environment, where balls are bowled on an LCD screen. “It’s in early stages, but we hope to have it running in a few months," says Kumar. It also wants to partner with out-of-home advertisers to introduce in-game advertising within the arcade game.

Do the two 23-year-old founders ever regret rejecting better paying jobs? “No, in any other job, you only look forward to Fridays," says Kumar, “But in a start-up, you look forward to Mondays."

This is the last in a series about entrepreneurs starting businesses during the economic slowdown.