"storyDirectUrl"
OPEN APP
Home / Industry / How does India fare in access to banking?

Despite progress, India lags behind most major economies in access to bank accounts

Financial inclusion may have become a buzzword among India’s econocrats and central bankers but India continues to lag behind most major economies when it comes to access to banking, the results of the Financial Access Survey for 2016 released by the International Monetary Fund (IMF) shows.

Consider this: as of 2015, India had over 1.2 lakh branches of commercial banks across the country. This is higher than the number in the US, China, Brazil, Russia and South Africa. However, this translates to just over 13 commercial bank branches for every 100,000 adults—much lower than in the case of Brazil, Russia, the UK and the US. In this respect, China is no better than India with 8 branches for every 100,000 adults. 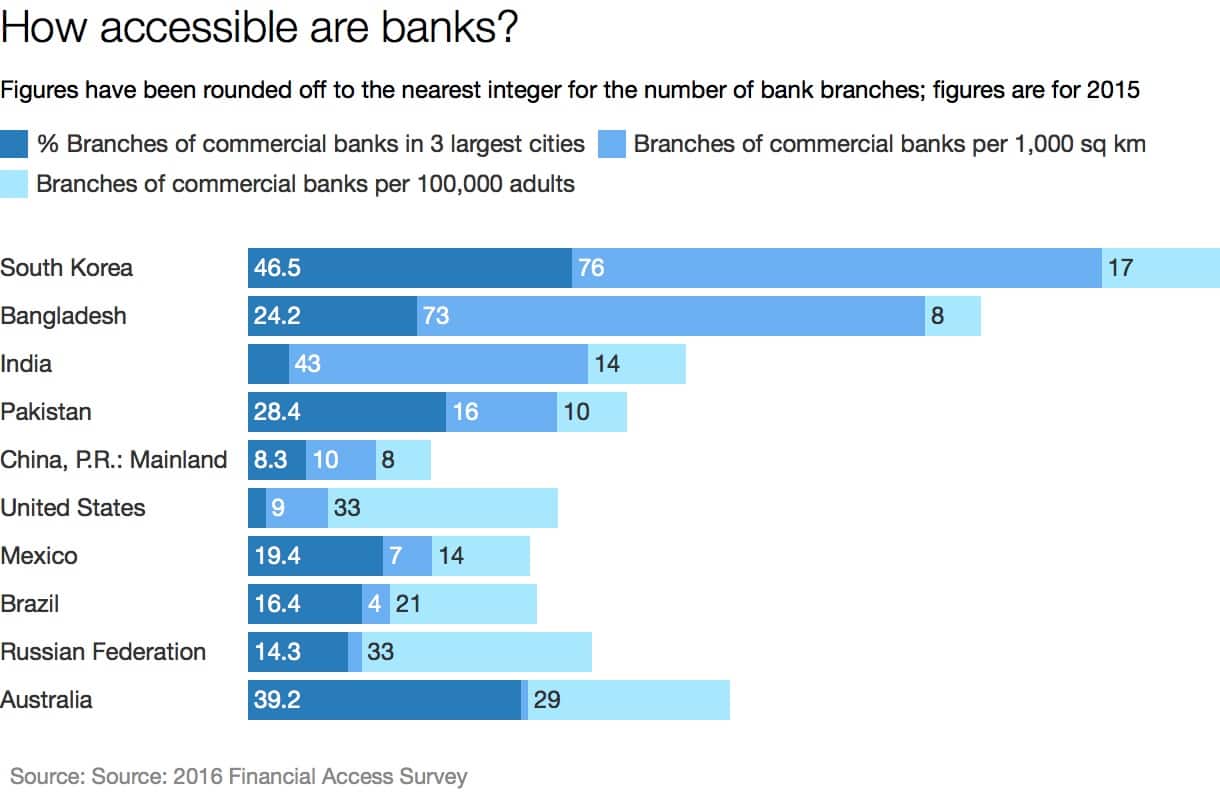 While India remains an under-banked country compared to most peers, its banking network is less concentrated in the top cities compared to several of its peers. Of the total number of bank branches in the country, close to 6% of them were located in the three largest cities in India in 2015. In comparison, over 46% of branches of commercial banks were located in three largest cities in South Korea. The corresponding figure for Australia was 39.2%, Brazil (16.4%), China (8.3%) and the US (2.5%). 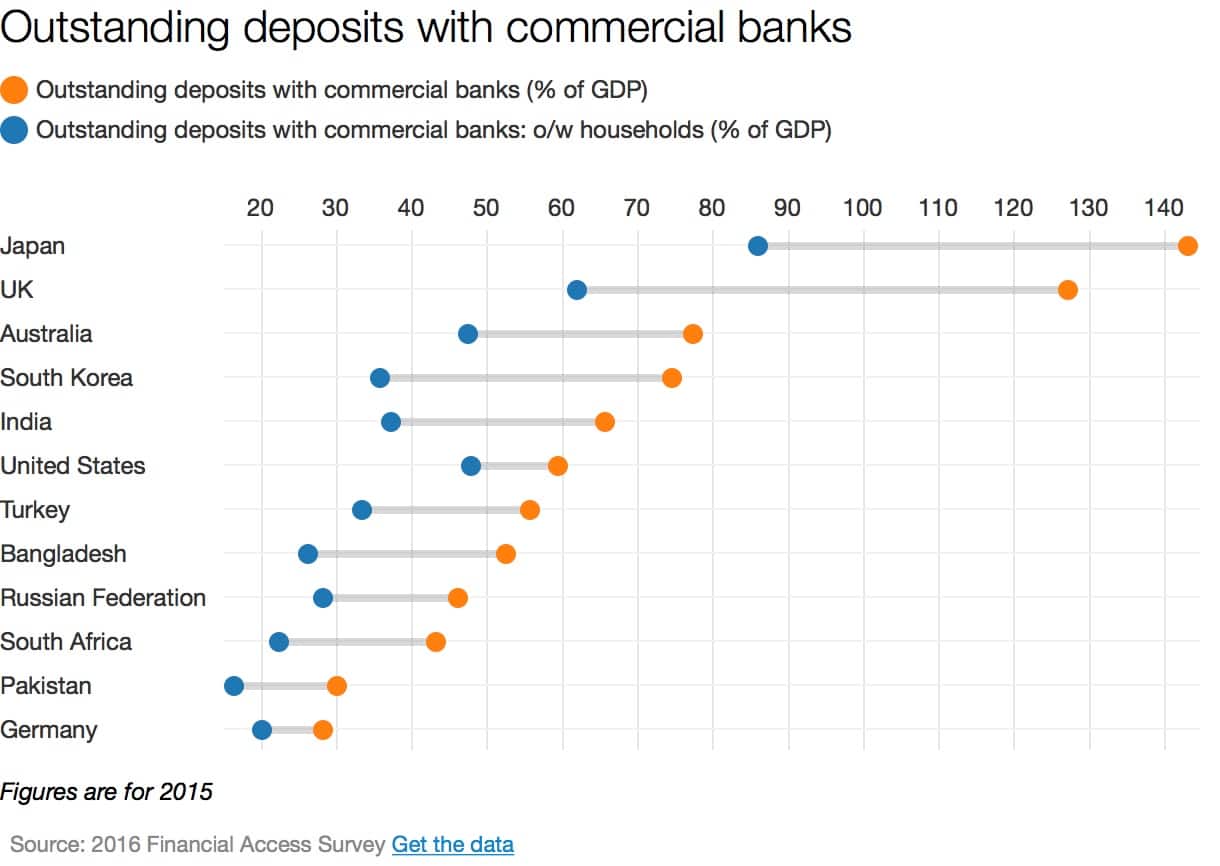 Outstanding deposits as percentage of GDP in India stood at 65.8% for India in 2015, while the same for households stood at 37.3%. Outstanding deposits as proportion of GDP for India is lower compared to Asian peers such as Japan and South Korea, which have high savings rates. However, the ratio of deposits-to-GDP in India is higher than that of Russia, South Africa, and the US.

Although the Indian banking network is not as concentrated in the top cities as some of its peers, state-wise data show that access to banking is very uneven across Indian states even today, with several poor states in the northern and eastern parts of the country lagging behind others, as the chart below shows. Goa has the greatest bank-to-population ratio followed by Punjab, while states such as Assam and Bihar are among the laggards.

As the chart below shows, the ranking of states based on number of bank accounts (per 100 persons) follows a similar pattern as the ranking based on density of bank branches. 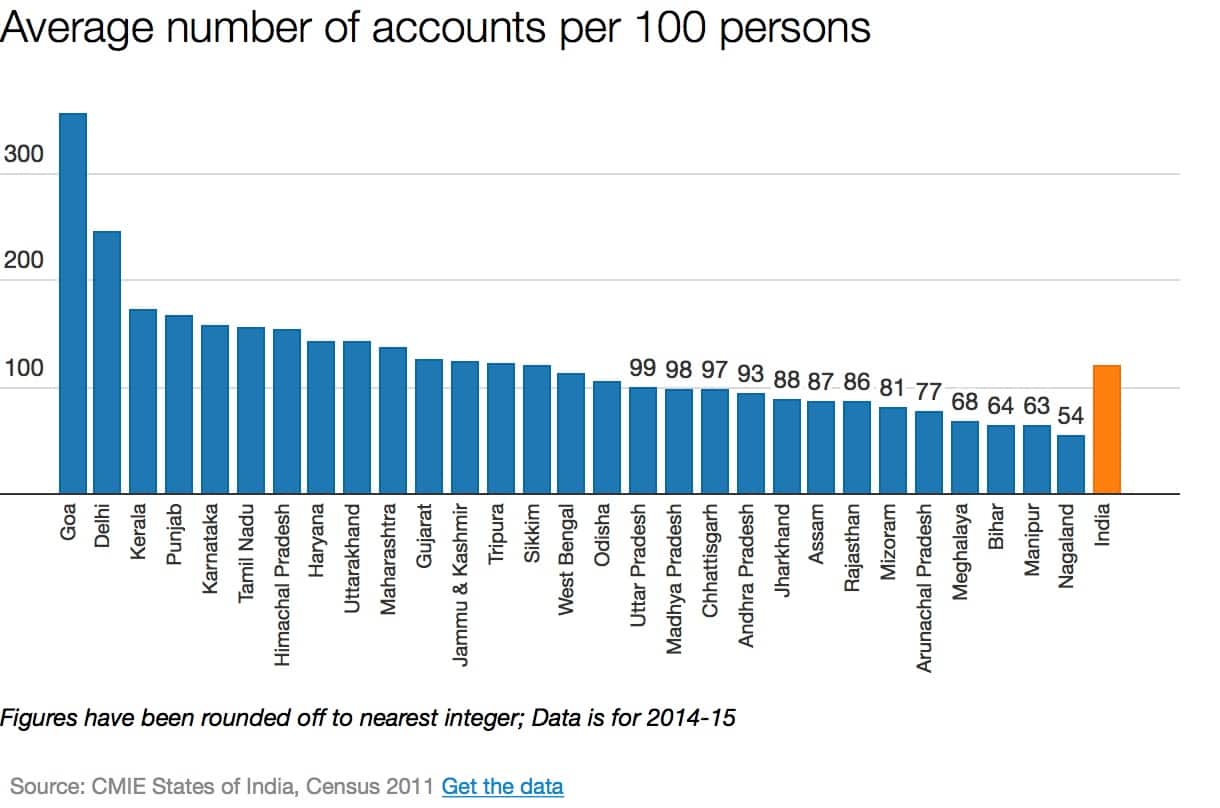 Catch all the Industry News, Banking News and Updates on Live Mint. Download The Mint News App to get Daily Market Updates.
More Less
Subscribe to Mint Newsletters
* Enter a valid email
* Thank you for subscribing to our newsletter.
Topics
plain-facts mint-india-wire