First round to Reliance Jio in the telecom battle, but the real fight begins now

Reliance Jio free services accelerated telecom consolidation and increased data usage, but a lot will depend on its ability to retain customers once the charges kick in

The mood of the investors seems to suggest that round one of the great Indian telecom battle has gone to Reliance Jio, with the company achieving the 100 million subscriber milestone in a little over five months, much faster than what analysts had estimated Reliance Jio would take to achieve that number. 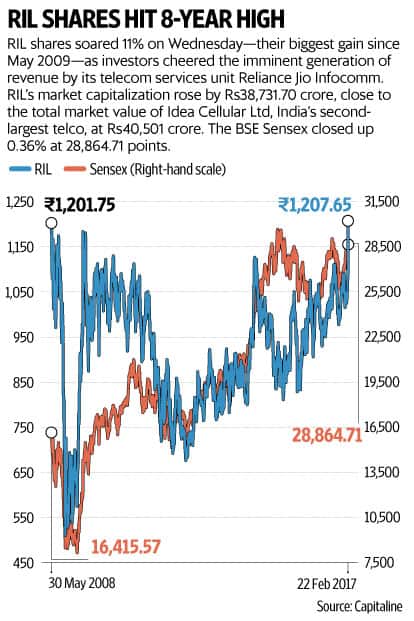 The company’s free services for the past five months has accelerated telecom industry consolidation as well as increased data usage. But it is still early days and a lot will depend on its ability to retain customers once it starts charging them.

“If Jio starts charging Rs303 per month, then we consider it to be positive for the industry as the offers may not be dilutive for Bharti (Airtel Ltd)/Idea (Cellular Ltd) as their average revenue per user is below Rs200. This may lead to some traffic moving back from Jio to top telcos," brokerage firm Bank of America Merrill Lynch said in an investor note on 21 February.

Reliance Jio will start charging customers after the free offer period ends on 31 March. It has committed to offering benefits available during the free-offer period till 31 March 2018 at an introductory price of Rs303 per month.

Reliance Jio’s strategy to become the primary carrier, especially for high-value customers, will face challenges and a race to the bottom is likely.

“Don’t be surprised if you see some churn at Jio, as its rivals will also come up with plans to retain their consumer base," said an industry executive requesting not to be named.

The fall in revenues and net profit at top telcos during the December quarter was mostly a result of customers shifting voice minutes and data consumption to their free Jio SIM. For subscribers, the stakes were not high as they have been using Reliance Jio as a secondary service provider, largely for data.

“The fundamental question is whether Jio has done enough over the last five months to convince these subscribers that it should be their primary operator going forward," Hong Kong-based Bernstein Research said in a note. “The collective choices made by these 100 million users will have a much bigger impact on the rest of the year than the free Jio offer has had on the last five months... In our view, anything over 50 million will signify that round two will also end up going to Jio." it added.

Nevertheless, consumers will continue to rejoice as rivals seek to counter Reliance Jio by bringing down overall pricing levels in the industry. This could erode average monthly revenue per user of the industry even further.

“We would expect them (incumbents) to respond—with or without a lag—to retain their customer bases," JP Morgan Markets said in a note. “Damned if you do, damned if you don’t—this would be at play here as a race to the bottom unfolds," it said.