Shares of private sector lenders Axis Bank Ltd and Kotak Mahindra Bank Ltd have risen 3.38% and 8.31%, respectively, over the past month, fuelled by rumours of a potential merger of the two, even as the two lenders have denied any such development. 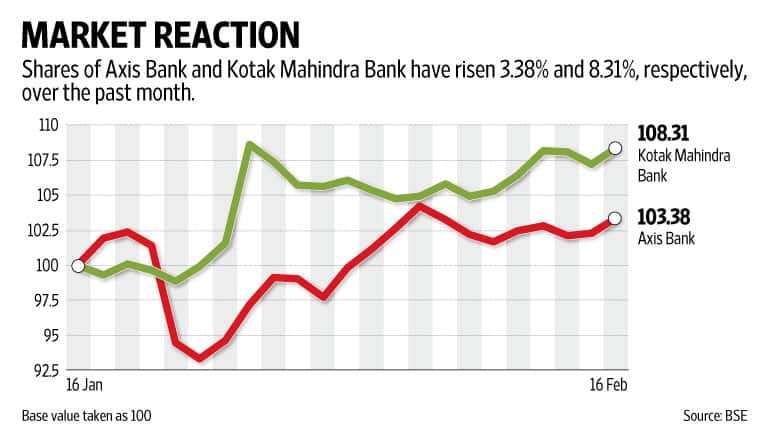 Earlier this month, news reports of a possible merger of the two banks surfaced and were immediately denied.

In a filing to stock exchanges on 9 February, Axis Bank called these reports “baseless speculation". The same day, Kotak Mahindra Bank’s founder Uday Kotak said that the lender does not comment on market speculation, but added to the speculation by saying that he is open to various options.

His reference may have been to ways to reduce the promoters’ stake in Kotak Mahindra.

On 1 February, the Reserve Bank of India asked promoters at Kotak Mahindra Bank to reduce their stake in the lender to 15% by March 2020. The promoters’ stake in the bank as on 31 December 2016 was over 33%. An acquisition is one way to bring down promoter holdings.

Kotak Mahindra Bank closed its merger with ING Vysya Bank in April 2015, after announcing it in November 2014. The entire process of rationalizing business and cleaning up the books took some time after closing the merger. The management at Kotak Mahindra Bank has indicated that the benefits of the merger in terms of improved retail business will start kicking in from the January-March 2017 quarter.

For the quarter ended 31 December 2016, Axis Bank reported a net profit of Rs580 crore, down 73% from a year ago, owing to higher provisions to cover bad loans. Total advances for the lender rose 10% on a year-on-year basis to Rs3.47 trillion at the end of the third quarter.

Kotak Mahindra Bank reported a net profit of Rs1,249.94 crore for the October-December period, up 33% from a year earlier, while its advances rose 12% from a year ago to Rs1.29 trillion.