The govt imported 15,000 tonnes of currency note paper during the April-October period, only 61.5% of what it imported in the previous full fiscal year

New Delhi: India did not significantly raise imports of paper used to print currency notes ahead of the shock announcement on 8 November to scrap 86% of currency in circulation, one of the reasons that may have contributed to the cash crunch and long queues before banks.

The government imported 15,000 tonnes of currency note paper during the April-October period, only 61.5% of what it imported in the previous full fiscal year, commerce ministry data showed. However, imports of currency paper during the April-October period were 15.2% more than what the government had imported in the same seven-month period in the previous year.

The import data of currency note paper shows government was not well-prepared to carry out the demonetisation exercise, said Pronab Sen, a former chief statistician of India.

“The import volume was at best meant to prepare for a normal planned monetary expansion after four years of marginal increase in money supply under governor Raghuram Rajan," he added. “Importing currency papers for demonetisation would have taken the volume altogether to a different level." 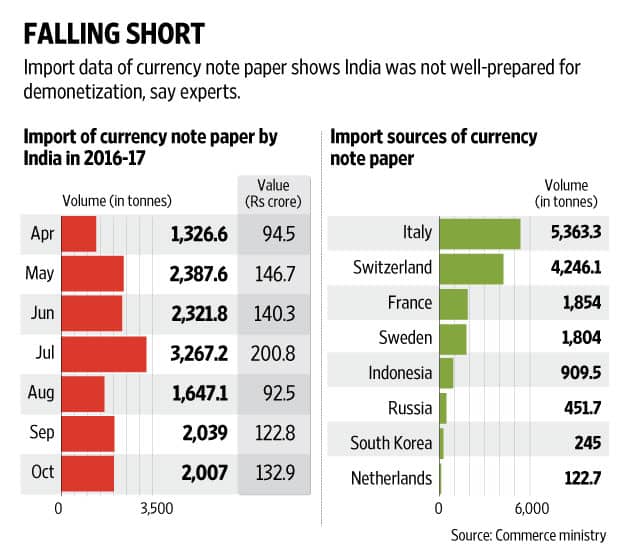 Many aspects of the currency swap are still shrouded in secrecy. The Reserve Bank of India (RBI) and the government have still not disclosed how much of the Rs15.4 trillion worth of old high-value notes has returned to the central bank.

After RBI last month said that Rs12.44 trillion of old currency were deposited in banks by 10 December, the finance ministry disputed the figure, citing possible double-counting and calling for the data to be sanitized. RBI has not released data after the finance ministry’s objection.

The annual requirement of Cylinder Watermarked Bank Note, another name for currency notes, in India is approximately 25,000 tonnes, according to the finance ministry’s 2015-16 annual report.

ALSO READ | What does it cost to print money?

India imports most of the paper it uses to print currency notes. Italy (5,363.3 tonnes) and Switzerland (4,246.1 tonnes) are the top two suppliers of papers for Indian banknotes in the current fiscal year.

A major chunk of the currency note paper worth Rs930.6 crore was imported from eight countries, mostly through the Chennai and Kolkata ports.

ALSO READ | How does the Rs2,000 note score on aesthetics?

Once fully functional, the two establishments will have a combined annual capacity of 18,000 tonnes, the finance ministry told Parliament in a statement on 29 May 2015.

According to the latest RBI data, the currency in circulation as on 20 January stood at Rs9.9 trillion, against Rs18 trillion on 4 November.

Currency notes in India are printed by Security Printing and Minting Corp. of India Ltd (SPMCIL) under the finance ministry and by Bharatiya Reserve Bank Note Mudran Pvt. Ltd (BRBNMPL), an RBI unit. SPMCIL has two currency presses at Dewas, Madhya Pradesh, and Nashik, Maharashtra, while BRBNMPL manages two presses—one at Mysuru and the other at Salboni in West Bengal.