Winners in India will span across formats (modern, traditional and e-commerce) picking the best of the consumer and economic proposition from each

In 1346, English troops faced the French during the Hundred Years’ War in the Battle of Crécy. The French were five times stronger than their opponents, and were clad in heavy armour, which had led them to victory so many times. However, this time, the English troops were armed with longbows manned by archers of deadly accuracy and power. What ensued took the French by surprise. The French knights were shot out of their saddles, and, weighed down with their heavy clunky armour, were comprehensively beaten. This battle was a milestone for craft of warfare, when the manner in which wars had been fought for over two centuries, changed forever.

The business of retailing is in the throes of similar changes around the globe. And nowhere is the change as quick and profound as it will be in India. In this article, we will explore what is driving the disruption, what makes India unique and the potential impact of this disruption on the socio-economic fabric of the country.

The basic elements of modern retailing as we know it today, have not changed in over a century. The last big wave of change was marked by the emergence of department stores in the 19th century, when the likes of Harrods changed how categories like apparel, furniture and homeware were sold. Similar shifts occurred in grocery retailing at the start of the 20th century, when supermarkets and hypermarkets started replacing bazaars in the Western world. This new model was based on the three tenets of choice (under one roof), transparency (in pricing) and experience (leading to discovery). The combination of these three parameters resulted in a different experience for the consumer and changed the economics of retailing. In the last hundred years, this model has not changed fundamentally—even though there has been a significant improvement in efficiency and effectiveness in every step of the value chain.

This model is now witnessing a transformation, with the Eastern world—best signified by the rise of Alibaba—leading the change. While the Internet is the key enabler driving this change, dismissing it as a mere technological phenomenon is an oversimplification. The changes in how consumers make choices and the resulting implications on business models have a profound impact on economies and society. We call this the 4A model for “Anytime. Anywhere. Anything. Anyone," retailing.

Anytime: The notion of “shopping time" is fast eroding. Shopping will extend well beyond planned monthly outings for purchases or impulse buys made when walking around the market. It is already possible to shop on a train ride to work or in the middle of a leisurely Sunday afternoon at home.

Anywhere: Shopping will no longer be limited to physical stores. In fact, the traditional mantra of “location, location, location" has been fundamentally challenged by this new model. The only location that matters is where does the site or the app sit—on the computer, smartphone, tablet or perhaps the watch!

Anything: While choice still remains central to shopping, the range of selection has already far exceeded what modern retailers imagined when they put a few tens of thousands of products on hypermarket shelves a few decades back. Today, Amazon alone claims to carry upwards of 500 million products in the US, adding an average 485,000 products every day.

Anyone: The role of customers in retailing is now moving beyond shopping. Reviews and recommendations from customers are now easily accessible, and are influencing buyer behaviour in a big way. Peer-to-peer retailing has turned customers into vendors.

It is important to reflect on the tectonic shift in retailing. From the traditional model of shopping across the counter to removing the counter to a point where the shop itself has moved. The constraints of time and space—in terms of location and shopping hours—have been relaxed. The most fundamental change has been in terms of anyone being a retailer, or a true democratization of retail.

India could be at the vanguard of this revolution, driven by a huge population that is increasingly turning digitally savvy. Exhibit 1 reveals some staggering facts about this “digital tsunami".

However, Indian retail spans across various formats, all coexisting, with their own unique characteristics. The three broad types of retail formats prevalent in the country today are:

•“Traditional" retail, characterized by a large number of mom-and-pop stores

•“Modern" retail, which typically operates in the form of chain of stores

“Traditional" retail, accounts for close to 90% of Indian retailing. These stores have the advantage of being very close to their customers and forging strong relationships with them, providing unmatched convenience, and localization benefits. However, they are threatened by the scale, range of choices and better shopping experiences provided by the newer formats.

“Modern" retail started in India almost 25 years ago. While store chains are really strong in the conventional elements of retail (choice, transparency, experience), the ramp-up has been slow and profitability remains challenged. This segment accounts for less than 10% of all retailing in the country, compared to around 40% in China.

“E-commerce" has captured the imagination of the country, as well as several global investors, over the last few years. Online retailers today offer benefits like high degree of customization, access to a large assortment, convenient delivery and value-added services, and aggressive prices. However, many have been plagued by flawed business models or weak execution. As a result, currently e-commerce accounts for less than 2% of all retail, albeit this percentage is growing rapidly.

Given all these pushes and pulls, what is the future of retailing in India? What will be the impact of the same on the various constituents? Who will be the winners and the losers?

The winners of tomorrow could be: a) a “traditional" kirana store that has a tablet-based billing system and uses a cloud-based inventory management tool to determine what and how much to buy. This kirana store could also be the last-mile delivery hub for online grocers; b) an “e-commerce" player that provides a platform for small manufacturers of apparel/textile/home décor to showcase their offerings to a wider platform—and who also sets up hundreds of small stores to showcase the key products, or c)…up to your imagination!

In India, the future will be an AND of formats, rather than an OR. So unlike how it has played out in most developed markets with clearly dominant formats at various points of time, India will have the winners who span across the three formats described above—picking the best of the consumer and economic proposition from each.

India’s economic growth has been driven largely by domestic consumption, and retail plays a critical part in that growth. The debate on retail gets derailed when one pits one stakeholder against the other. We believe that in the new construct of retail, there will be multiple winners—consumers, manufacturers, producers, employees and the government. This model will result in wide implications on the socio-economic fabric of the country.

To start with, in almost any scenario— the 1.2 billion consumers will benefit significantly. The sustained growth in the sector will provide for better quality and wider variety of products. Market forces will compel players to maintain competitive prices—and there is adequate room for efficiency improvements in the supply chain to continue passing on the benefits to the consumer. The responsiveness of retailers to the customer is bound to go up. 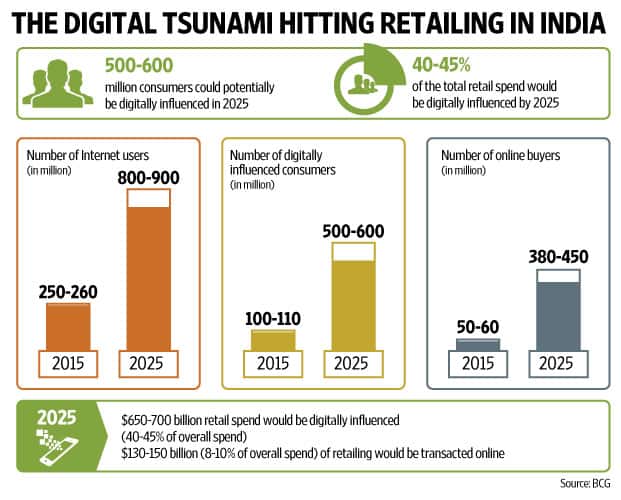 The 4A or Anytime/Anywhere/Anything/Anyone model will be a game changer for the small suppliers and producers. It allows a platform for product marketing, price discovery and new market creation. Manufacturers, who have been traditionally constrained by distribution choices, are now embracing online marketplaces, eyeing markets beyond the country as well. Farmers will have greater direct access to end retail and can reduce wastage and intermediary margins to capture greater share of value. The fact is that retail and manufacturing sectors will be mutually beneficial and dependant. The example of Alibaba in China (and increasingly a few in India) has clearly displayed what an online platform can do for small players.

The retail industry is already the second-largest employer in the country. However, most of the jobs in this sector currently are informal and offer limited growth opportunities for individuals. We believe that with the change in the model, the nature of jobs in retail—in traditional, modern and e-commerce sectors will change—with higher skill requirement and greater dignity of labour. With greater formalization of the sector, job security and opportunities for career growth will rise dramatically.

The icing on the cake will be the increased tax collections for the government. With a larger portion of country-wide retail sales getting billed more accurately, and with the implementation of the new goods and services tax regime, most medium-sized retailers, and many small shop owners, will be included in the formal economy for the first time.

The retail industry has the unique ability to play both the supply and demand sides of growth—creating jobs and income growth that drive consumption, while also catering to that consumption with great efficiency. It is also an industry that is in the midst of a digital revolution globally—a revolution unique in the fact that it has the potential to be driven from the East. To realize its full potential, the industry must transform itself and embrace technology as a driver of innovation. It must become the English army with its longbows and not the French army weighed down by its own armour.