At the Reliance AGM on 21 July, Mukesh Ambani unveiled Jio Phone, a 4G feature phone at effectively zero price. Mint examines Reliance Jio's strategy here on and implications of the offer for its rivals

Mumbai: Once every year, shareholders of Reliance Industries Ltd (RIL), India’s most valuable company, gather to hear their chairman speak on oil and  gas, petrochemicals, refining and marketing and retail. Despite the company’s recent ventures in telecom, Mukesh Ambani, India’s richest man, keeps to these sectors. The focus shows up in its annual report as well. The last one devoted the first 18 paragraphs to its legacy businesses. Outside the ecosystem of its shareholders, investors, analysts and, of course, the media, the Reliance annual general meeting (AGM) does not spark much interest.

The 21 July Reliance AGM was different.

Reliance Jio Infocomm Ltd, the RIL unit that rattled the industry with mobile phone services launch last September, was front and centre. Addressing “My Dear Shareowners", he started off with Reliance Jio, reading out more than five A4-sized pages on its “achievements" before moving on to the more traditional sectors.

Amid chants of “Jioooo, Jio" by shareholders latching on to his every word, Ambani began serving appetizers in doses. These included Jio Phone users getting “unlimited data" for just Rs153 per month, albeit with a “fair usage policy of half a GB per day". However, the icing on the cake was the Jio Phone which, he said, would be effectively free.

“It will be a fourth-generation- or 4G-capable Jio Phone, with unlimited data and optional TV streaming, and free for subscribers who will have to pay just Rs1,500 as security deposit that will be refundable after three years if they return the handset," Ambani said, “...to protect against misuse of the free Jio Phone offer." A standing ovation followed.

The cheers continued as his son Akash and daughter Isha, also directors on the Reliance Jio board, took the stage to launch the Jio Phone and introduce its various features. Using its voice-activated feature, Akash played one of the editions of Mann ki Baat, a monthly radio address by Prime Minister Narendra Modi, and a trailer of the movie Baahubali 2.

Mukesh Ambani peppered his speech with multiple adjectives: “Team Jio stunned the world... It has been only 10 months since the launch of Jio. And what an incredible journey it has been!... Jio has broken one world record after another. First, nobody believed we could acquire customers fast enough to justify our Rs200,000-crore (Rs2 trillion) investment in the world’s largest greenfield 4G LTE all-IP network." Reliance Jio uses voice over long term evolution (VoLTE), which is essentially voice over internet protocol or IP-based LTE network. Fourth-generation (4G) is typically a marketing term for LTE.

Reiterating that more than 100 million people signed up for Jio in under 170 days, something he had disclosed at last year’s AGM, Ambani insisted this “was the fastest adoption of any technology service, anywhere—faster than even Facebook, WhatsApp and Skype". Jio currently has more than 125 million customers. According to Ambani, Jio users consistently make more than 250 crore (2.5 billion) minutes of voice and video calls every single day. Ambani reasons that more than 500 million feature phone users in India “have been left out of the digital revolution (the remaining 280 million being smartphones) since they cannot avail of any benefits of a smartphone, “much less the benefits of a 4G LTE smartphone". He proposes to end this shortage by building a “data-strong network... with the highest speeds and the best coverage".

Ambani simultaneously spoke of his plans to offer “digital freedom" to Jio Phone users beginning 15 August by giving them access to “unlimited data". “If these feature phone users were to consume a similar quantity of data on another operator’s network, they would spend over Rs4,000-5,000 per month at prevailing 2G data rates. Jio will provide this at only Rs153 per month... that is one-thirtieth the price". The rider, however, is “a fair usage policy of half a GB per day, to ensure that bandwidth is fairly apportioned".

The third leg of Jio’s strategy, according to Ambani, is the “Jio Phone TV cable" that connects Jio Phone with any TV, not just a smart TV, so that all Jio Phone users can enjoy viewing on their television sets.

Finally, to support the enhanced coverage, Jio is expanding its distribution network. According to Ambani, Jio will soon have over 10,000 Jio offices across India. These will serve the company’s sales channel partners and over one million physical retail outlets that sell Jio services. In addition, Jio plans to integrate with all major e-commerce platforms.

The deposit of Rs1,500 for Jio Phone is refundable after three years; however, while this makes it effectively free, there is an opportunity cost for users. After all, users could have earned a return on the deposit elsewhere. 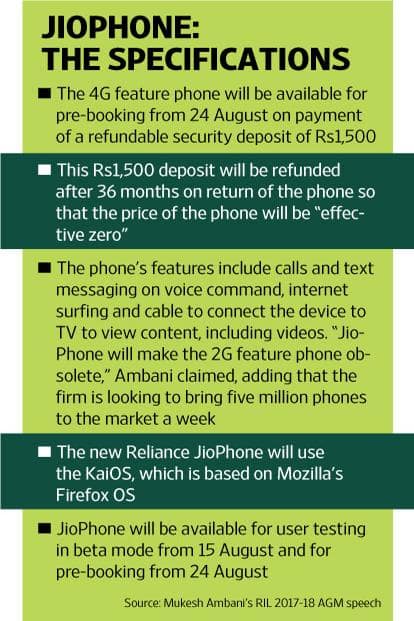 Also, there are sceptics. Bank of America Merrill Lynch wrote in a note to clients on 21 July, “We do not see Jio being able to penetrate the mass market with the announced offer as we see the monthly price of Rs153 and Rs1,500 initial deposit as still being steep for low-income consumers."

Not all analysts concur with this view. “This device is targeted more towards first-time mobile internet users, to get them to use the company’s online services ecosystem. RJio is targeting the feature phone market and targeting five million sales of the device, which is achievable by our analysis," Jayanth Kolla, co-founder and partner at digital technology research and advisory firm Convergence Catalyst, said.

He pointed out that by collecting Rs1,500 as “refundable deposit", the company is ensuring that it collects “a significant portion of the device cost upfront, and is not subsidizing it significantly".

The return of the deposit three years later could come with conditions attached, one of which is that the device is to be in a “good, working condition... Considering the life of mobile devices currently, we expect a fair amount of these deposits being uncollected or not returned to consumers... which essentially is revenue for the company," Kolla added. He pointed out that the Rs153 unlimited voice and data pack offer, which translates to around Rs139 as average revenue per user, or ARPU, (after adjusting for taxes) is just marginally above the current industry average ARPU of Rs133 (after taxes).

The company has made its whole bouquet of apps—RJio Apps (such as music, TV, chat, etc.,) available on the device. However, considering that this is a feature phone, and not a smartphone that can support a number of third-party apps, and the device does not support tethering of data (using as a wifi-hot spot) and comes with only a 2.4-inch screen, Kolla does not expect “significant" data consumption by users, compared with an average smartphone user.

Across the world, there is an ongoing fight among large companies to retain internet consumers to spend as much time as possible on their own properties, and different companies are overlaying various products over the internet, noted Kolla.

“While we await the fine print of the ‘Jio Phone’, our initial analysis suggests the impact on larger telcos like Bharti, and DTH operators like Dish TV, will be neutral to marginally negative," Goldman Sachs researchers said in a 24 July note to clients. They also believe the launch of Jio Phone will “push handset vendors to come up with own phones, with features and price points close to Jio’s announced Rs1,500 phone".

Kolla, on his part, believes “unlimited voice" is an attractive option and expects this device to be used primarily for voice calling. However, he cautions that since Reliance Jio under current regulations needs to pay an interconnect usage charge (IUC) to competitors for terminating voice calls on other networks, this “could be detrimental to its bottom line". That said, this move is also expected to increase pressure on Reliance Jio’s rivals’ voice minutes and revenue of all listed telecom operators, according to Kolla.

In a 20 July press note, before the Reliance AGM, Bharti Airtel claimed “...with the tsunami of calls originating from Reliance Jio’s network, Airtel loses 21 paisa for every minute that is carried on its network. This has resulted in a loss of Rs550 crore per quarter for Airtel alone".

To be sure, India is still one of the biggest feature phones market with 35-40 million phones expected to be sold in 2018, according to Convergence Catalyst.

Market researcher Counterpoint Research estimates close to 60 million units of 4G feature phones could ship globally in 2017 from one million last year, with India potentially contributing to almost half.

In a 21 March note, Neil Shah, an analyst at Counterpoint Research, noted that more than 400 million feature phones were sold globally in 2016 and “we saw smartphone market growth slow to 3% y-o-y, portraying that easy days of smartphone growth are over". “This is making a case for the rise of 4G-capable feature phones, with the core value proposition being VoLTE calls, and move the users to cost-efficient 4G networks. We estimate more than half a billion 4G-capable feature phones will be sold in the next five years, a ‘big short-term opportunity’ for players in the mobile industry," Shah added in his note.

Close to 200 million 4G feature phones will be potentially sold in India in the next five years, bridging the digital divide, presenting an opportunity for original equipment manufacturers as well as telecom operators, said Counterpoint Research. In the process, we could also see smartphone market growth might slow down a bit as the laggard feature phone users who eventually would have purchased a smartphone will delay the purchase for the 4G feature phone.

For Jio Phone, all the stars seem to be aligned.

Nasrin Sultana and Kalpana Pathak contributed to the story.