Why Indian petrol prices are so high despite lower crude prices 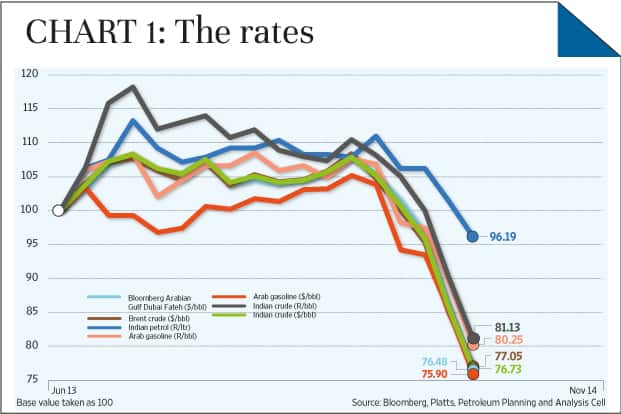 Part of this wide discrepancy is, of course, explained by the exchange rate. As the first chart shows, when the Indian crude basket is converted into rupees, the fall in prices is smaller. But it is still around 19%.

Then, the Indian crude basket is only a broad benchmark. The starting price for calculating local petrol prices is Arab Gulf Gasoline rates. But as Chart 1 shows, these rates too closely track international benchmarks such as Brent crude and Arab Gulf Dubai Fateh. The typical build-up to local petrol prices from international rates is shown in Chart 2. The first big jump from international to local rates is seen in the price charged by oil marketing companies (OMCs) to their dealers. This mark-up (percentage difference between landed cost of petrol and price charged to dealers) largely comprises inland freight and delivery charges, the marketing cost of OMCs and their marketing margins. This mark-up has inched up from 5.28% in June 2013 to 14.99% in December as Chart 3 shows. After the last bout of excise hikes, it has fallen since OMCs have absorbed the hit. With falling commodity prices, it is unlikely that inland freight rates or marketing costs would have shot up. Thus, it is more probable that OMCs have increased their share of profits from the sale of petrol. 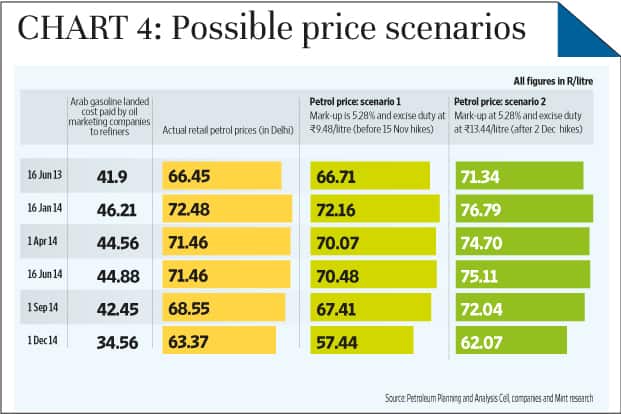 What would have been the price of petrol if this mark-up that OMCs charge to dealers had remained at June 2013 rates? Chart 4 points out the possible scenarios. With a 5.2% mark-up and unchanged excise rates (before the 15 November hike), retail prices would fallen to ₹ 57.44, almost ₹ 6 lower than current prices. Even with the latest round of excise hikes, the price would have been ₹ 62.06, about ₹ 1.3 lower than current prices.

To be sure, every company has the right to charge what it wants and increase its profits. But what explains the fact that all three state-owned OMCs have the same mark-up, which implies similar costs and margins, despite being of different sizes? The difference between the final prices of Bharat Petroleum Corp. Ltd (BPCL) and Indian Oil Corp. Ltd (IOC), which is almost twice its size, is just 4 paise.

Clearly, despite deregulation, the benefits of competition are being denied to Indian petrol consumers.