TRAI pushes for powers to penalize telcos for call drops

New Delhi: The Supreme Court may have ruled that the Telecom Regulatory Authority of India (Trai) doesn’t have the right to penalize telcos for dropped calls, but the regulator is pushing ahead with efforts to get telcos to improve the quality of their service.

On Wednesday, Trai released a study that shows most telcos performing poorly in terms of call drops, local user and industry lingo for dropped calls—those that terminate abruptly for technical reasons before the call is complete. This study only covered Delhi. Over the next 15 days, the regulator plans to release similar studies for 11 more cities.

The regulator also indicated that it would seek powers from the government to levy penalties. Other regulators, including stock market watchdog, have this right.

One, most telcos, barring Mahanagar Telecom Nigam Ltd (MTNL, and that too for the state-owned firm’s 3G service only), meet the benchmark quality for setting up a call.

Two, most telcos, other than Reliance Communications Ltd (for its 2G service) and Vodafone India (for 3G), do not meet the benchmark in terms of call drops. 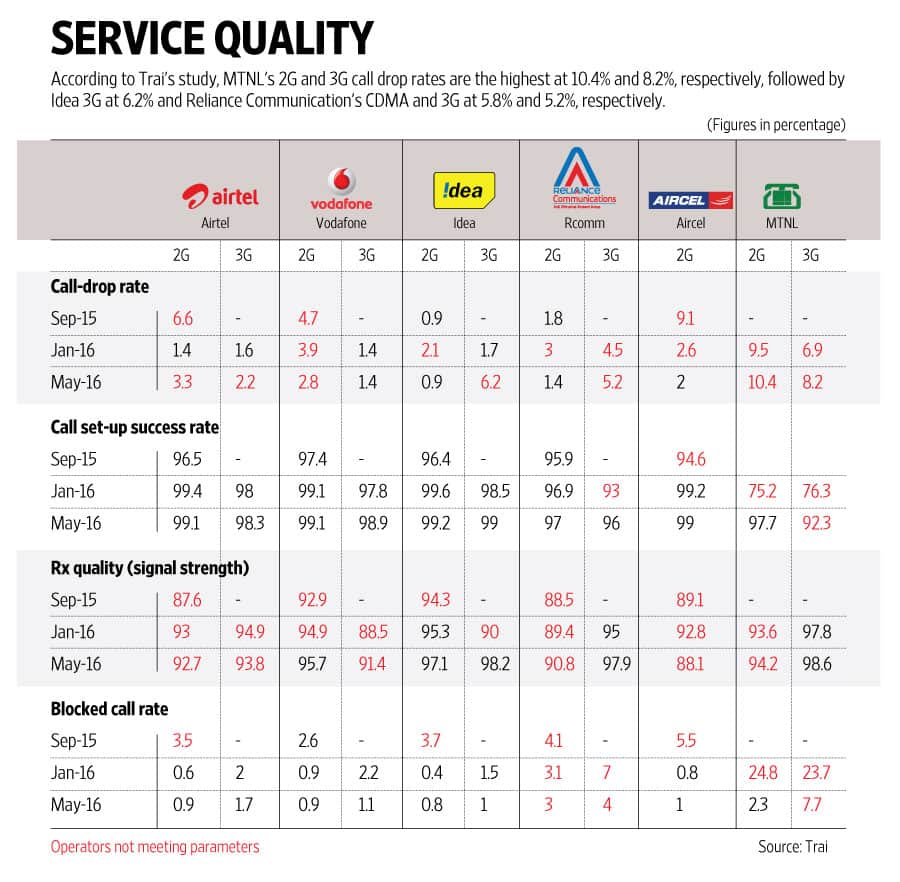 Three, Bharti Airtel’s 2G and 3G service, and all telcos operating on the CDMA technology standard (most, including Airtel, the country’s largest telco, operate on the dominant GSM one) do not meet the benchmark for signal strength.

“Airtel, Vodafone, Reliance, Aircel and Idea need to further improve the Call Drop Rate performance. The CDMA operators and MTNL need to improve across all parameters, in order to offer acceptable levels of service," Trai said.

“We have been conducting drive tests to access quality regularly and for the last 8-9 months we have increased the tests in terms of coverage with the number of cities going up to almost 12," said Trai chairman R.S. Sharma.

Sharma said that Trai has also created a portal where information on call drops will be made available to the public.

A second Trai official said, with reference to the Supreme Court’s verdict, that Trai would seek powers from the government to penalize errant telcos.

“We will write to the department of telecommunications today for an amendment in the Trai Act to give us more power," said Sudhir Gupta, secretary, Trai.

None of the telcos wanted to comment on the development.

“We are happy to see the report and we should look at the significant improvement in call set-up success rate," he said, adding that the telcos have tried to address the issue and there has been an improvement on that front that the regulator must recognize.

Rajan S. Mathews, director general of industry lobby group Cellular Operators Association of India, criticized Trai’s study and said that if such studies were conducted in congested areas, such results are only to be expected.

“The key areas highlighted in the report where most telcos have high call-drop rate are central Delhi, Dwarka-Indira Gandhi Airport, Gurgaon-Manesar and Noida-Mayur Vihar. The industry is addressing problems in these areas, developing networks by getting permissions to install cell towers in these areas," Mathews said.

All telcos but state-run Bharat Sanchar Nigam Ltd and MTNL meet the quality of service parameters, he claimed.

Mathews also said agencies hired by the regulator to carry out its studies “don’t completely follow the standard operating procedures".

Trai should not have powers to penalize telcos, Mathews said.

Trai’s Sharma said the telcos were aware of the study, implying that their poor performance came despite this.

“We are trying to show the consumers that in comparison to last drive tests the conditions have deteriorated (concerning call-drop rate)," he said.

Trai regulations state that not more than 2% of the calls on a network should be dropped. Based on these guidelines, in October, Trai suggested penalizing telcos by making them pay ₹ 1 to a user for every call drop, subject to a maximum of three dropped calls per day, with effect from 1 January 2016. The move attracted widespread criticism from telcos, who went to the courts.

The apex court struck down Trai’s recommendation in May.