Thanks for Visiting Mint
You seem to have an Ad Blocker on. Please turn it off in order to continue, or whitelist Mint
HOW TO TURN OFF AD BLOCKER
OR
REFRESH IF YOU ALREADY TURNED OFF THE AD BLOCKER
Home >Industry >Manufacturing >Passenger vehicle sales rise 5.2% in December

New Delhi: Passenger vehicle sales in December rose by 5.2% from a year ago to 239,712 units on higher demand for utility vehicles and the favourable effect of a low year-ago base in the aftermath of demonetisation.

Car sales declined marginally by 0.18% to 158,326 units, but sales of utility vehicles (UVs) increased by 15% to 67,073 units, according to data provided by the Society of Indian Automobile Manufacturers (Siam). 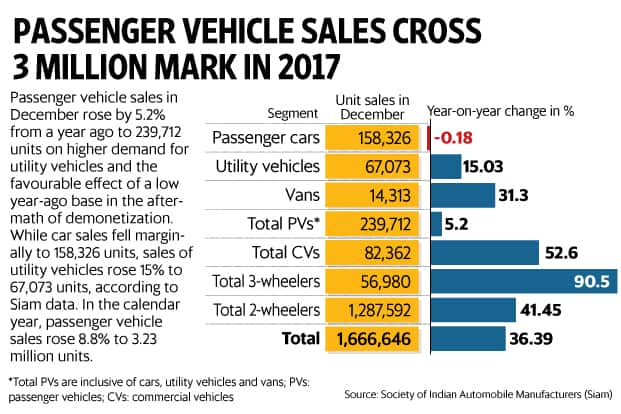 Pointing to a revival in the economy, commercial vehicle sales increased by 52.62% to 82,362 units in December. Mandatory introduction of air-conditioned cabins in trucks from January will lead to price increases, a factor that contributed to higher sales of commercial vehicles in November and December.

“December is as usual not a great month as production plants of some companies are shut for some time. Also postponement of buying to achieve a new year’s registration date happens in the month. We need to look at the January and February data to get a broader picture on the rural market," said Ashwin Patil, a research analyst at LKP Securities.

In the calender year, passenger vehicle sales touched the 3 million mark for the first time. Sales increased by 8.8% to 3,229,109 units in 2017 from the previous year.

Softening of interest rates on loans for both cars and commercial vehicles and the low base effect in the aftermath of the November 2016 invalidation of high-value banknotes has prompted Siam to revise its sales growth for passenger vehicles to 9% in the year from 7-9% at the start of the year. The forecast for sales growth in commercial vehicles has been revised to 13% from 4-6% as transporters expand their fleets to meet increasing demand for movement of freight.

Sugato Sen, deputy director general of Siam, said demand had shifted to UVs, and too much shouldn’t be made of the decline in car sales.

“We have seen during the last few years that December sales have been subdued. In the January-to-March period, car sales will pick up," added Sen.