Accenture is estimated to add $3.63 billion in incremental revenue, a shade less than the new business at TCS, Cognizant, Infosys and Wipro put together, in 2017-18

Bengaluru: Since the turn of the century, a heritage company has always led growth in the information technology (IT) outsourcing industry. It has always been one of these four companies: Tata Consultancy Services Ltd (TCS), Cognizant Technology Solutions Corp., Infosys Ltd and Wipro Ltd.

This is set to change as Accenture Plc will outpace TCS, Infosys, Wipro and Nasdaq-listed Cognizant in the 2017-18 financial year. 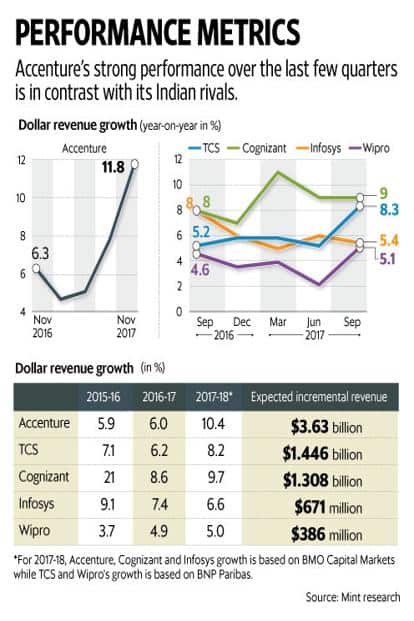 Accenture is estimated to add $3.63 billion in incremental revenue, a shade less than the new business at the four other large companies put together, according to Mint research based on analyst projections. It’s a development that underscores the tardiness of India’s largest IT companies when it comes to rebooting their traditional business model.

Accenture does not outline full-year dollar-revenue growth but management said that favourable currency movement will help it report higher growth.

This made at least one analyst, who still called the management’s revised guidance conservative, project 10.4% dollar revenue growth for Accenture in this fiscal, citing the prospect of a 260 basis point (bp) “tailwind" in foreign exchange terms. One basis point is 0.01 percentage point.

“We are raising our FY18 revenue forecast to $38.48 billion from $38.23 billion, representing 7.8% y/y CC growth," Keith Bachman, an analyst with BMO Capital Markets, wrote in a note dated 21 December.

Accenture’s strong performance over the last few quarters is in contrast with its smaller Indian rivals. TCS last reported double-digit, year-over-year growth in a three-month period during the March quarter of 2016 while Infosys grew 10.9% in the June quarter last year. Cognizant has fared better than homegrown IT firms but even the Nasdaq-listed firm needs to improve on its current growth when compared to Accenture.

TCS does not give a quarterly or yearly outlook; Wipro only outlines a quarterly target. Both TCS and Wipro are estimated to grow at-best 8.2% and 5%, respectively, according to BNP Paribas analyst Abhiram Eleswarapu who, in a 15 December note, discussed the road ahead for the sector.

Based on these growth projections, Accenture will add $3.63 billion in incremental business in this fiscal as against $3.81 billion in new business by TCS, Cognizant, Infosys and Wipro put together.

At the heart of Accenture’s better performance is the strong consulting practice and aggressive investments in new technology areas like cloud computing, data analytics and design capabilities, clubbed as digital technologies: Last year, Accenture spent $1.7 billion to buy 37 companies, considerably more than the $1.58 billion spent by TCS, Infosys and Wipro together since 1 April 2014.

“We have been particularly successful with Accenture Digital, nearly tripling the annual revenue from this business since we launched it four years ago, and we have expanded our capabilities to help our clients with their digital transformations," Accenture CEO Pierre Nanterme told analysts in a post-earnings call on 21 December.

For this fiscal, Accenture has outlined spending of $1.4 billion in acquisitions.

Digital, the fuzzy and umbrella term which each company uses to classify revenue generated from areas generally classified as social, mobile, analytics, cloud computing and internet of things, accounts for less than a fourth of revenue at Indian IT companies, far less than Accenture, which claimed that 55% of business in the latest quarter came from selling these new technology solutions.

To be sure, Accenture’s ascension has been in the making. In January, Mint reported that Accenture’s growth could be on a par with TCS in 2016-17 as the Mumbai-based firm continued to look away from making any acquisitions. In November, TCS acknowledged that it is in the firm’s DNA to groom talent and build technologies in-house even if implementing this strategy means it has to sacrifice some growth in the short term.