The government aims to provide 50 mbps broadband to all key development institutions and improve connectivity in uncovered areas under the new policy.

New Delhi: The Union cabinet on Wednesday approved the new telecom policy that aims to attract $100 billion in investments into India by 2022 and create 4 million jobs.

“Emerging technologies like 5G and Internet of Things warrant the need for a new consumer-centric and application-centric policy," telecom minister Manoj Sinha told reporters after the cabinet meeting. “We want telecom to become not just a revenue generating sector but also a socio-economic growth sector."

India’s telecom industry desperately needs to attract capital, especially from outside, to funnel investments into new technologies such as 5G and expand networks, as a bruising price war triggered by the entry of Reliance Jio Infocomm Ltd in September 2016 has left rival telecom operators bloodied.

“The industry today is facing one of its toughest phases and low-cost financing is the need of the hour for most service providers who are languishing in debt and unprecedented losses," said Harsh Walia, associate partner, Khaitan and Co. “This (new policy) will not only aid proliferation of telecom services, but also facilitate low-cost financing."

The policy will accord telecom infrastructure the status of “critical and essential infrastructure", which would smoothen operations at the state and municipality level and also recognize optic fibre cables as a “public utility". 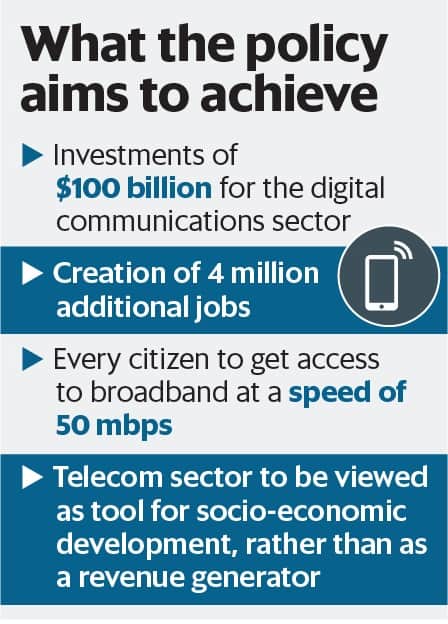 The department of telecommunications (DoT) had on 1 May floated the draft for public consultation, outlining goals the government wants to achieve by 2022, including providing broadband coverage for all, creating four million additional jobs in the digital communications sector, apart from enhancing the contribution of the sector to 8% of India’s gross domestic product from less than 6% in 2017.

The hit on revenue streams because of the tariff war in the sector has forced operators to either shut shop or get acquired by larger telcos, leaving just three private operators—Vodafone Idea Ltd, Bharti Airtel Ltd and Reliance Jio—to compete for market share.

“We hope that the DoT will closely monitor the timely implementation of this policy, so that the industry can recuperate from the deepening financial stress," said Rajan Mathews, director general, Cellular Operators Association of India. “Thus, the most important and urgent requirement is to restore the financial health of the sector for which the policy document envisages the reduction in levies and ease of doing business."

In order to attract investments and increase India’s contribution to global value chains, the government will review levies and fees payable by telcos, including licence fee, and universal service obligation fund levy, the draft states, apart from looking at rationalizing spectrum usage charges.

The policy, titled National Digital Communications Policy 2018, will now be tabled in Parliament. “We aim to kick-start implementation on the ground by the next one year and the overall objectives would be met in five years," Sinha said.

The policy has also announced goals such as deployment of five million public Wi-Fi hot spots by 2020 and 10 million by 2022 through a National Broadband Mission, apart from implementing a “Fibre First Initiative" to take fibre to the home.

The government also aims to enable infrastructure convergence for IT, telecom and broadcasting by amending the Indian Telegraph Act, 1885, and other relevant laws, apart from formulating a policy on encryption and data retention.

In the previous policy, the government had implemented full mobile number portability and liberalization of spectrum, among other measures