Why the Internet of Things matters

The Internet of Things seeks to enable things to be connected any time, any place, and with anything or anyone

Mumbai: As the world moves towards converging technologies, analysts predict that billions of devices will be able to communicate with each other—an ability that has the potential to dramatically enhance the quality of living and change the way we experience products around us.

The Internet of Things, or IoT, is defined as a worldwide network of “things" that include identifiable devices, appliances, equipment, machinery of all forms and sizes with the intelligence to seamlessly connect, communicate and control or manage each other to perform a set of tasks with minimum intervention.

The goal of IoT is to enable things to be connected any time, any place, and with anything or anyone.

IoT is not a single technology, but a concept. IoT research has its roots in several domains, including Radio-Frequency Identification (RFID), Machine-to-Machine (M2M) communication and Machine-Type Communication (MTC), Wireless Sensor and Actuator Networks (WSAN), Ubiquitous Computing, and the Web-of-Things (WoT).

This is perhaps one reason that analysts also prefer to call it The Internet of Everything, or IOE.

Regardless of the nomenclature, IoT or IoE is rapidly emerging as a third, and likely bigger wave in the development of the Internet, according to a 15 December report by consulting firm KPMG.

With the advent of the Personal Computer (PC), the number of active Internet connections swelled to the millions. Then came the second wave as smartphones and tablets were introduced and quickly adopted, and all of a sudden a single person could have multiple devices connected to each other.

We are now at the beginning of the third wave as wearable devices—fitness bands, watches, and eyeglasses, automobiles, appliances, and sensors connect to the Internet, bringing the number of connected devices into tens of billions, said the report.

This rapid growth is being driven by a steep decline in prices of components such as RFID chips and the increasing ubiquity of broadband access.

The government of India’s Department of Electronics and Information Technology (DeitY) released the first IoT policy framework proposal for India, in October. This policy document related to the IoT framework is part of the broader ‘Digital India’ vision shared by the central government. The government envisions creating a market of $15 billion by 2020 in India, increasing connected devices from the current 200 million to 2.7 billion by 2020. Along with tax incentives and duty rebates on imports (up to 100%) and domestic purchase of raw materials required for IoT products’ manufacturing, the government also proposes incentives for development of IoT companies’ incubation centres and funding Indian IoT companies’ travel to international exhibitions and industry forums, in its draft policy framework. 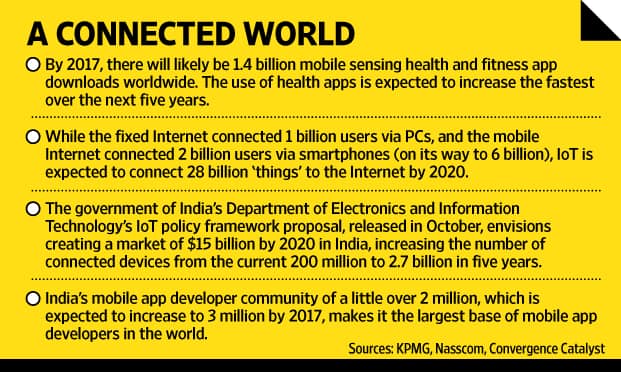 The government has proposed an allocation of $21 million on a public-private partnership basis as 50% funding for at least five projects each from different categories such as smart cities, water, environment, health, waste management, agriculture, safety and supply chain or similar IoT applications/projects over a period of three years.

India’s mobile app developer community of a little over 2 million—expected to increase to 3 million by 2017—also makes it the largest base of mobile app developers in the world. An increasing portion of these developers could potentially focus on IoT apps and innovations, according to a December report by Bengaluru-based telecom research and advisory firm Convergence Catalyst.

But there are challenges too, the report points out.

For instance, India has its own cultural, market and structural challenges that could potentially hinder the growth of an IoT ecosystem in India, both as a market and an innovation hub. Moreover, most of the Indian technology companies (primarily in the IT and Telecom domains) are primarily service businesses and are not product or platform companies.

While service-based businesses ensure early revenues, they lack scalability and have lesser competitive advantage, In order to lead the IoT space, and leverage the domestic and global market opportunities and most importantly compete with global companies, Indian technology-based companies need to evolve into product and platform developers, the Convergence Catalyst report says.

The IoT value chain in India is also disconnected and fragmented. There is a lack of component players, which is a key hindrance for design, testing and development of IoT products in India.

Sourcing these components (mainly from China) is a time consuming process, which could extend the product development cycle, and could also introduce potential quality issues.

Another key issue in India is the fewer number of large-scale electronics and semiconductor products manufacturing facilities. Also, wireless data connectivity is not ubiquitous in India. This is a fundamental structural issue for deployment and adoption of IoT applications and services in India.

And, as digital infrastructure goes mainstream, there can be challenges like security, data breach, interoperability and privacy which may pose barriers to the overall framework, note the KPMG analysts in their report. Security could be of the utmost concern, as data would be exchanged over connected devices and underpinned by data breach of personal information. The consumer could be one of the most important stakeholders in this scenario, the report notes.

Data privacy in digital infrastructure holds a high value as it is directly related to personalization and real-time insight generation.

According to the Department of Electronics and Information Technology (DeitY), the IoT industry in India is expected to be a $15 billion market by 2020. It is expected that India would have a share of 5-6% of the global IoT industry.

Digital infrastructure is expected to create tremendous opportunities for technology companies across verticals and in key applications like smart cities, smart utilities, smart healthcare and smart transportation. Technology visionaries and several start-ups are already flooding the market with smart devices and are intent on taking it to the next level where these devices would be collectively intelligent, notes the report. According to software industry lobby group Nasscom, over 400 start-ups of the current total of 3,100 (over 800 get added annually), deal with disruptive technologies like wearable tech, home automation and fleet management, 3D printing, payment solutions and automation, big data and social media analytics.