Los Angeles: Google Inc has turned on the music at its new online store, aiming to wrest the lead from Apple Inc and Amazon.com Inc in audio entertainment distribution despite the absence of a major record label.

Google Music, with more 13 million songs, will be integrated with Android Market, the company’s online store for smartphone apps and videos as it plays catch-up with its rivals. Apple, Amazon and Facebook have to varying degrees integrated music into their core online and mobile products.

Google Music will allow the Web search leader to do the same by letting consumers access music from various Internet-connected devices and easily share tracks with friends. 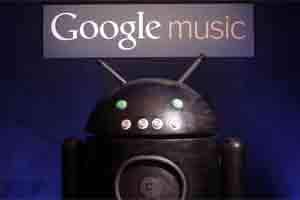 Sign for the Google digital music store is seen during an unveiling event in Los Angeles. Photo: AP

“They’ve got to get that catalog filled pretty quickly," said Mike McGuire, an analyst at industry research firm Gartner. “It’s a launch, but it’s kind of like a work-in-progress."

Google Music was unveiled at a splashy event at the Mr. Brainwash Studios in Hollywood, California on Wednesday.

Analysts say selling online music is unlikely to provide much of a lift to Google’s revenue. But they say Google needs to be in the market to ensure that its Android-based mobile efforts can match offerings from competitors.

Android is the world’s number one smartphone operating system, powering about 200 million devices worldwide. But without a music service, Android-based smartphones and tablets may not be as attractive to consumers seeking a product that offers a seamless media experience.

And with music storage increasingly moving to remote Internet servers in “the cloud" rather than on the device itself, companies like Google and Apple have a way to keep users locked in to their respective mobile services, said BGC Partners analyst Colin Gillis.

“Everyone is using music and media as a jail. Ultimately, this stuff is going to be stored in the cloud and it becomes harder and harder to switch systems," he said.

To help jump-start the new music store, Google said it will offer one free song for consumers to download every day.

Google will also allow consumers to share purchased songs with friends on the Google+ social network. The feature will give users of Google+ a “free, full-play" of songs purchased by their friends.

“Recommendations from friends are the single most important way that people discover music and we think that this feature has the potential to really transform purchasing behavior," said Zahavah Levine, Google’s director of content partnerships for Android, at Wednesday’s event.

Music executives said that even though sales have struggled in recent years, music usage has never been more popular on different types of formats like social networks and mobile devices.

Facebook, the world’s largest social network, unveiled a tab in September through which music services like Spotify, Rdio and MOG enable Facebook users to share music. Amazon has also long been a major music retailer and has a music locker service

Earlier this year, Google unveiled the Google Music beta, which allowed users to upload their music to Google servers, and access the music from multiple devices.

Shares of Google, which finished Wednesday’s regular session at $611.47, were up 72 cents in after-hours trading.