Pepe's India subsidiary is looking at a valuation of Rs2,000 crore for its wholly-owned subsidiary in India

Though Carlyle and GA were in the race since beginning, Advent joined a couple of weeks ago, said the first person on condition of anonymity. Earlier, global fund KKR & Co. and home grown PE fund Everstone Capital Advisors Pvt. Ltd were also in discussions to acquire the majority stake in Pepe Jeans, said the second person.

The parent company of Pepe Jeans India which is looking for a valuation of Rs2,000 crore for the Indian business, had hired Kotak Investment Bank to advise on the deal. 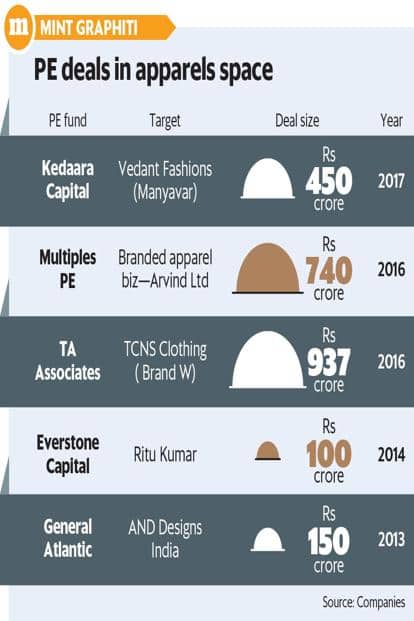 The group includes Pepe Jeans London, which accounts for 70% of group sales, and the Hackett brand, which accounts for the remaining business. A Carlyle spokesperson declined to comment while mails sent to GA, Advent spokespersons went unanswered. Pepe Jeans India CEO Kavindra Mishra did not respond to calls seeking comment. LVMH did not respond to a Mint query till press time.

Pepe Jeans India is a wholly owned subsidiary of Pepe Jeans Group which is headquartered in Barcelona, Spain. Pepe Jeans was originally founded by three Indians—Arun, Nitin and Milan Shah in London in 1973 as a weekend stall denim brand. In February 2015, LVMH and Lebanese group M1 bought a majority stake in Pepe Jeans.