The demonetization initiative of the ₹ 500 and ₹ ,000 denominations by the government has generated a huge amount of chatter in social media with views and counterviews.

The findings are interesting on this huge initiative with the initial comments (12 lakh of which were captured and analyzed over the first five days ) indicating a big thumbs up in social media to the initiative with 46 % positive and 19 % negative and about 35 % being interested in the topic but not expressing a view either way.

A deep dive throws up the positive comments being largely around appreciation of the massive step in the fight against black money (“surgical strike against black money" and the negatives being centered around the initial practical inconvenience. Interestingly, the day-to-day trends reflect the big initial positive applause for the initiative thereafter getting tempered by the inconvenience and then again veering strongly back to the positive appreciation of the initiative.

Netimpact Solutions, a social analytics company-cum-marketing consultancy, captured and analyzed over 12 lakh conversations around the demonetization measure between after the announcement on 8 November till 13 November (Conversations are defined as tweets, mentions, posts, comments, retweets and shares—Likes and views are excluded—see Methodology). The key themes of the conversations are elaborated below.

From the announcement on 8 November evening till 10 November night, over 7.5 Lakh comments were captured by Netimpact across social media around the change. An analysis of the comments in the first 48 hours show that 45% were positive comments, calling the measure a good initiative against curbing black money with comments like “Best move against black money" and a “surgical strike against black money". This outnumbered the negatives by a huge ratio of 3:1 with those opposing the initiative getting questioned as to the motive behind the criticism “people with black money must be crying".

The first 48 hours, perhaps, gives a glimpse of the positivity expressed in social media about the initiative per se before the sentiment gets impacted by the practical aspects of the changeover on the next few days. Thereafter, the positive percentage dipped marginally on Friday (11 November) to 40 % with negatives increasing as people came face to face with the practical difficulties. After a dip on Friday, on Saturday (12 November) and Sunday (13 November) the positive comments percentage again stared pushing up with them hitting 50% by Sunday. 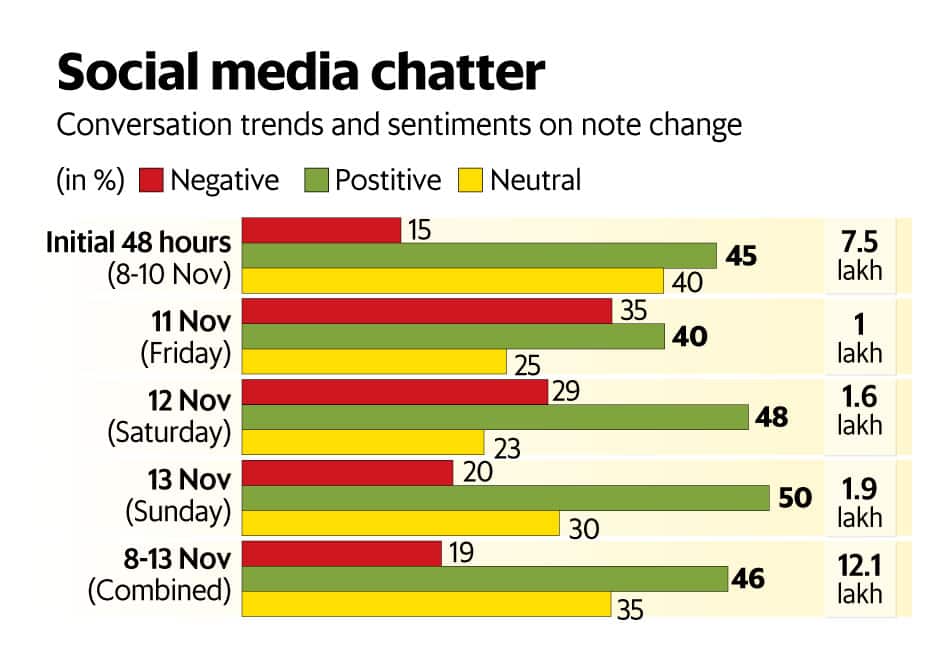 The negatives around the practical inconvenience

The initial 48 hours saw about 15% of the overall conversations being negative with the concerns around the inconveniences and hardships of the big initiative. Interestingly, the criticisms about the intent of the initiative per se has fewer takers. The third full day of the move (11 November) saw two trends—a petering down of social comments to about a lakh a day and interestingly the negative conversations increasing (as a percentage) reflecting the impact of the initial teething troubles with statements like “queues growing larger" though positives still led slightly (40 % to 35 %). After the initial frustrations were vented by Friday and Saturday, by Sunday the negative percentage had fallen back to 20% with positives hitting 50%.

Trending back up after the initial difficulties

After the initial teething troubles led frustrations peaked on Friday the ratio of the positive to negative again by Sunday (13 November) was going back to the original level with a strong support of the measure coming to the fore (50 % positives compared to 20 % negatives and 30 % showing keen interest in the measure but not explicitly taking a side).

Clubbing the initial days together shows a clear heads up in social to the initiative—close to the halfway mark. It will be interesting to see how the broad support for the larger move plays out against the practical short term pain of the change over process.

The number of conversations have been arrived at with the following methodology and NetImpact’s proprietary techniques:

1. Volume of conversations: 12 lakh plus

4. Conversations measured are those that could be captured by various tools and packages and NetImpact’s proprietary techniques. These are not exhaustive but strongly directional given the numbers captured.

These conversations are the ones that had a mention directly or indirectly to the topic.