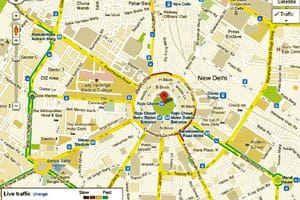 Real-time information: Roads for which traffic information is available will be labelled green for free flowing traffic, yellow for minor slowdowns and red for significant congestion.

Google will also explore gathering data from other sources to improve the service, said Baker. In some cities, like Bangalore, a dedicated Traffic Management Centre (TMC) monitors traffic on major roads and crucial junctions. Additional Commissioner of Police (Traffic) M.A. Saleem said that the TMC has nearly five enforcement cameras and 160 surveillance cameras across the city. “We are open to providing this data to anyone who needs it", he said.

Users will also be able to view expected traffic conditions on roads at different times of the day on the desktop version of Google Maps. “This draws on historical traffic information that Google has been collecting," said Baker. Traffic information will also be available on other devices including Apple’s iPhone and Research In Motion Inc.’s Blackberry devices.

Google also announced the availability of turn-by-turn navigation for the Android mobile operating system, a feature typically found in in-car global positioning systems, where directions are provided continuously through spoken instructions. Users can see their current location on a map and instructions will be given when a user arrives at a turning point.

Baker said that the Google Maps team in India had to include more landmarks in their navigation directions as names of several roads were not clear or they were not marked properly on the ground.

Google Maps Navigation will also make use of the traffic data when calculating directions so that users will be routed around areas of congestion. The service will also be integrated with other features on Android phones such as Google search and voice search capabilities, allowing users to find directions by speaking out the destination.