Car sales in February jump 12.4% on demand from non-metros

Growth in car sales in February was led by hatchbacks, including the Maruti Suzuki Baleno, Swift and Ignis, rising 38.7% to 65,213 units from a year ago

Volume growth marginally missed expectations as the favourable base effect of demonetisation has waned, an analyst said. However, sustained demand from non-metro areas is expected to help car makers in the coming months, he added. 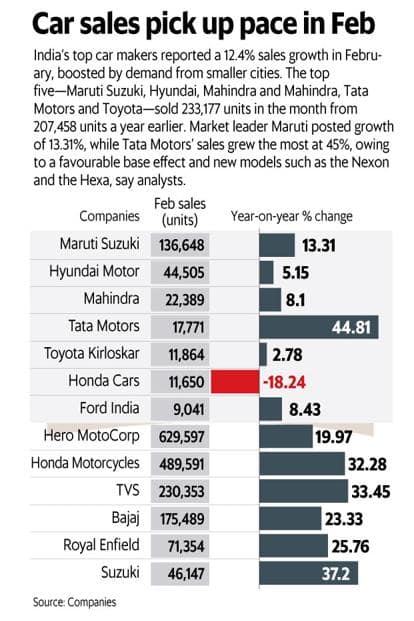 Icra has forecast an 8-9% growth in passenger vehicles for the fiscal year, he added.

Sales growth for the month was led by the compact segment—including the Baleno and other hatchbacks such as Swift and Ignis—rising 38.7% to 65,213 units from a year ago.

While old-models such as Alto and WagonR grew 2.1% after declining for several months, sales of the mid-sized Ciaz sedan declined nearly 17%, in line with a trend prevalent since July 2017, when the government withdrew the benefits extended to hybrid models under the goods and services tax (GST) regime.

Maruti could have posted higher numbers if not for capacity constraints at its Hansalpur plant in Gujarat.

Hyundai India reported sales of 44,505 units during the month, a 5.15% rise from a year earlier, on the back of models such as the new Elite i20 hatchback, Verna sedan and compact SUV Creta, according to Rakesh Srivastava, director of sales and marketing at the South Korean automaker’s Indian arm.

Sales at Mahindra came in at 22,389 units, an 8.1% rise from a year ago. Rajan Wadhera, president of the automotive business at the Mumbai-based automaker, expects the “sustained momentum and demand" to continue in March as well.

Tata Motors posted a 45% jump in sales, clocking 17,771 units, owing to a favourable base effect and consumer acceptance of new models, including the Nexon and Hexa in the UV segment, according to Mayank Pareek, president of the passenger vehicles unit at Tata Group flagship.

“We are expanding our customer base across segments and we look forward to sustaining this growth rate and maintain cautious optimism," he added.

Sales at Toyota Kirloskar advanced by a marginal 2.78% to 11,864 units. N. Raja, deputy managing director at TKM, a joint venture between Toyota Motor Corp. of Japan and the Kirloskar group, said the company hopes to boost its sales momentum with the launch of the Yaris sedan in May 2018. The company will also strengthen its focus in the UV and sedan segments with better operational efficiency, he added.

Sales at Honda Cars India Ltd slumped 18.24% to 11,650 units owing to a planned reduction in volumes of the current variant of the compact sedan Amaze, according to Yoichiro Ueno, president and chief executive at the firm.

“We are confident of closing the financial year on a positive note", he added.

The temporary blip apart, models such as flagship sedan City, WR-V SUV and Jazz hatchback continued to drive volumes for the company.

Ford India Pvt. Ltd reported an 8.43% rise in sales to 9,041 units. Anurag Mehotra, president and managing director at the American automaker’s Indian subsidiary, said, “Improvements in GDP (gross domestic product) growth and other industry indicators continue to support the year-on-year growth of the auto industry", but cautioned against the dampening effect of an “impending increase in interest rates, crude prices and inflation".