Bangalore: The local software laboratory of International Business Machines Corp., or IBM, said it has opened a centre for cloud computing in India that will pilot projects in e-governance and telecommunications, ahead of the firm offering commercial services in these areas to customers. 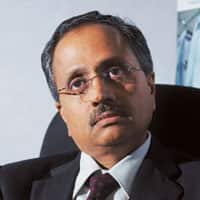 Affordable answer:P. Gopalakrishnan of IBM India at the launch of the cloud computing centre in Bangalore on Wednesday. Hemant Mishra / Mint

Cloud computing improves energy efficiency because of shared infrastructure, and allows organizations to pay for what they use, IBM said in a statement.

IBM has around 200 researchers and has committed $100 million (Rs458 crore) to its cloud computing centres globally. The India centre is the company’s 14th, opened the same day as centres in Korea, Vietnam and Brazil.

“Cloud computing is a great answer to bring in innovations at an affordable cost," said Shanker Annaswamy, country general manager for India at IBM.

The firm plans to offer its lab to academic institutions to build new technologies and for customers to pilot new services such as opening new bank accounts and accessing e-government services online. The Indian Institute of Technology, Kanpur is among the first to use the IBM lab.

Analysts say cloud computing has relevance in India, given the fact that it can bring economies of scale, where many applications can be shared through common resources at multiple locations.

“Given our scarce resources, shareable and unutilized server capacities (as low as 12% in most environments), investments could be made in e-governance, educational and other public-private-centred entities, wherein centralized investments can be made for common standards," said T.R. Madan Mohan, managing partner at city-based management consultancy Browne and Mohan.

Google predicts the “cloud" of computational resources—and online data and content—will grow rapidly for a long time. “The increasing number and diversity of interactions will not only direct more information to the cloud, they will also provide valuable information on how people and systems think and react," said Alfred Spector, vice-president of engineering, and Franz Och, research scientist, in a posting on the official Google blog on 18 September.

IBM’s India software lab does what it calls more than 1,600 customer engagements. It employs more than 73,000 software and business process outsoucing professionals in the country.