As the government resolutely pushes digital payments in a bid to move India towards a less-cash economy, a look at why tension is brewing between fintech firms and large banks

Mumbai: In the first fortnight of the New Year when Indians were still warming up to digital payments, many buyers on the country’s top shopping portal, Flipkart, had a nasty surprise: purchases they attempted on the Flipkart app through PhonePe, a digital payment method integrated into the app, were getting rejected.

ICICI Bank retorted that PhonePe was following “restrictive practices" and said banks have raised “security related concerns at appropriate forums". With UPI, any person holding any bank account can transfer money to another account, through any UPI app. However, in this particular case, only those with a virtual payment address from Yes Bank Ltd—PhonePe’s banking partner—could do so. In effect, PhonePe customers were tied to Yes Bank. The National Payments Corp. of India (NPCI) that developed UPI stepped in, and asked ICICI Bank to resume the transactions, but reversed its stance just a day later to back the ICICI Bank position that PhonePe must comply with rules mandating inter-operability. Following this, Flipkart pulled the PhonePe payments option from its app.

The PhonePe fiasco was the first serious manifestation of turf battles and insecurities that emerged in India’s financial technology sector after it withdrew high-value bank notes in November.

The shock move, initially positioned as an attack on black money, counterfeiting and terror finance, sucked out 84% of the value of currency in circulation.

In order to ease a cash crunch and smoothen the transition to a cashless mode, banks were asked to waive fees on transactions on automated teller machines (ATMs) and merchant discount rate (MDR) and asked to get two million point-of-sale terminals (each costing up to Rs12,000) before 31 March. MDR is a charge merchants have to pay for a card payment at their outlets, and is often passed on to the customer.

Meanwhile, the crippling cash shortage that followed demonetisation gave a massive boost to cashless payments, and PhonePe was one of the several boats lifted by this tide.

As the government and the banking regulator promote digital transactions and persuade Indians to make cashless payments, large banks want a greater say in the way fintech evolves. They want fintech firms to share with them customer data, and a lion’s share of the fees they earn, since the banks ultimately own the customer and the payments infrastructure at large.

While most banks have their own mobile banking apps, some have also tied up with operators of digital wallets to facilitate electronic payments. Banks have also invested in improving their back-end and front-end technology to provide quality payment services.

Private sector lenders such as ICICI Bank, Yes Bank and Axis Bank Ltd have all started deploying technologies such as blockchain to ensure safe and automated services where each point of a transaction can be tracked through a digital ledger.

India’s largest bank, State Bank of India, has formed a technology team to ensure it can innovate consistently and come up with new services.

But as more companies enter the digital payments space, inter-operability is becoming key. This is where banks seem to be fumbling. The PhonePe case is an example.

“If large banks are going to block payments for some silly reasons, it is only going to hurt their own customers. It will also impact the penetration of digital payments mechanisms such as UPI and mobile wallets," said the digital payments chief at a mid-sized private sector lender, requesting anonymity because of the complicated nature of the issues.

With the advent of UPI, smaller banks and payments services providers discovered another avenue to start a relationship with a new customer and an opportunity to cross-sell services. By getting a customer’s transaction history, these banks and service providers can design customized products, which may be more aligned to the customer’s needs. 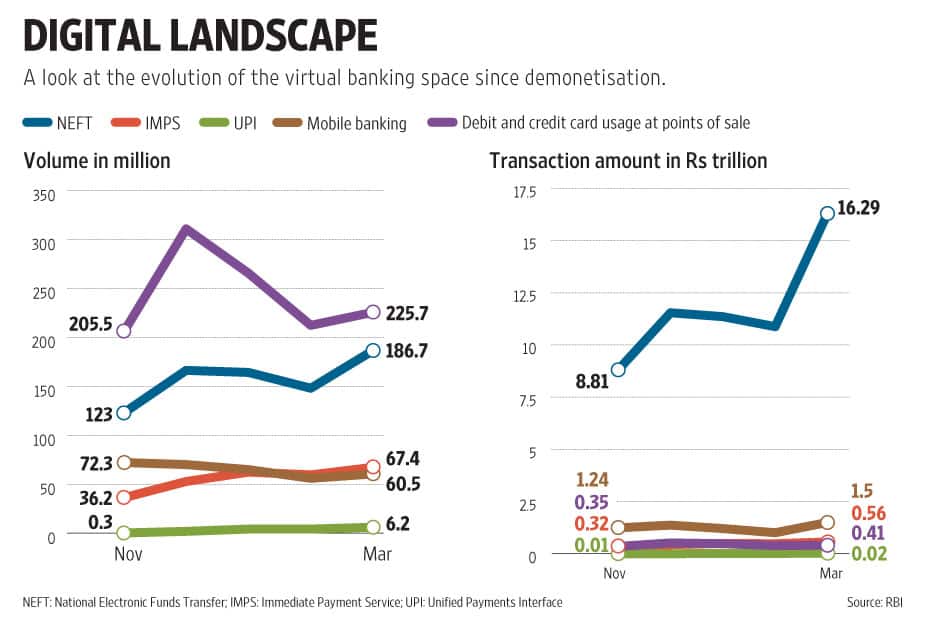 While UPI has largely remained a peer-to-peer payment option, NPCI recently tied up with Reliance Retail to allow UPI-based payments at 200 of its stores. According to A.P. Hota, managing director and chief executive officer of NPCI, more such tie-ups are in the offing.

“There is a level of cut-throat competition at banks to acquire merchant businesses. Everyone wants to have a major portion of this business as it gets them a good amount of revenue. In this, if there are fintech firms that add to competition, it can cause some more friction," said a senior official at a digital payments technology provider on condition of anonymity.

“As fintech companies are nimble, owing to their size, they can innovate and implement much faster than banks. If they receive the backing of some smaller banks, their ability to sell it to people increases manifold, which may displease some larger banks. Effectively though, this leads to the business being harmed as large merchants will think twice before they sign up for new modes of payments such as UPI," he added.

According to the chief of another digital payments firm, India’s electronic payments space developed with large banks issuing the highest number of credit and debit cards. They owned a large number of customers. To incentivize them to issue more cards, banks were offered a large portion of MDR. Typically, a card-issuing bank would get paid anywhere between 60-90% of the MDR.

“With time, though, this should have changed; but these banks have managed to dominate. If there is an inequitable distribution of the fee, then the non-cash payments space may become unviable," said the second digital payments company official cited above, on condition of anonymity.

The fears of non-cash payments firms (meaning firms other than banks who are in the payments business) about not getting paid enough may also have stemmed from the Reserve Bank of India’s (RBI’s) proposal to limit MDR depending on the size of the merchant. RBI has proposed that smaller merchants with an annual turnover of Rs20 lakh or below pay an MDR not exceeding 0.4% on physical card transactions and not exceeding 0.3% on electronic transactions without cards. As the merchant size increases, the MDR also goes up. The regulator is still assessing the responses and will be finalizing guidelines in this matter shortly.

“It is only fair that lenders who provide the infrastructure and the customers get the major share of the whole MDR," said the retail head of a large private sector bank on condition of anonymity. “Otherwise, there is no incentive for banks to pursue this. Without the involvement of bankers, payment systems will never truly develop in India."

Bankers have also been vocal about their distrust of the mobile wallets, which have seen explosive growth.

“I think wallets have no future. There is not enough margin in the payment business for wallets to have a future," Aditya Puri, managing director and chief executive of HDFC Bank Ltd, India’s second largest private lender, said at an event on 17 February.

“Wallets as a valid economic proposition is doubtful. There is no money in the payments business. The current loss reported by market leader Paytm is Rs1,651 crore. You cannot have a business that says pay a Rs500 bill and take Rs250 cash-back," Puri said. Wallet companies cannot “copy" the “Alibaba model" as well, as the domestic regulators are “better", Puri said.

For SBI, the distrust stems from security concerns. India’s largest lender last year blocked the use of its internet banking service to load mobile wallets, on the heels of a scandal after reports that some people used SBI accounts to transfer money into wallets and then transferred it to other bank accounts to be withdrawn. ICICI Bank’s chief executive Chanda Kochhar, too, linked the PhonePe issue to similar security concerns.

Banks’s fears also might be stemming from the rapid growth in customer base that some digital payments firms have seen since the invalidation of high-value currency notes on 8 November. For instance, Paytm, which had a customer base of 130 million wallets before November 2016, saw it rise to 200 million currently. It aims to reach 500 million wallets by 2020.

“Large banks are probably trying to ensure they do not cede any more ground to payments firms, some of which have seen significant and meaningful growth. They are probably innovating as much as some of the smaller firms; but owing to their size and governance infrastructure, it takes time for them to implement things. In the meantime, though, the system should probably aim at growing together, than employ any silly tactics," said Bhavik Hathi, managing director at Alvarez and Marsal India, a consulting firm.

Apart from releasing a set of draft norms last month, RBI has largely been quiet about the financial technology space. RBI has proposed to raise the entry barrier for prepaid instrument (PPI) issuers such as mobile wallet and gift card companies by insisting on a higher positive net worth.

The draft guidelines also propose tougher controls over PPI issuers and seek higher accountability in terms of cross-border transactions, know-your-customer (KYC) norms, anti-money laundering norms and reporting to the regulator in times of any significant changes in the control of the companies, or cases of fraud.

Cash loading to PPIs must be limited to Rs50,000 per month, subject to the overall limit of the PPI where full KYC of a customer is obtained, RBI has said. In case of PPIs with minimum KYC, this monthly limit would be set at Rs20,000. For PPI accounts with electronic KYC like one-time passwords, the maximum limit has been set at Rs10,000, according to the draft guidelines.

RBI has justified its tough stance on PPIs with the argument of protecting customer interest. In a speech delivered in February, former deputy governor, R. Gandhi said if a firm deposits and transfers public money, it is a bank and all banks must be licensed to carry out functions.

“There is an implied suggestion that this sector needs to be freed of licensing mechanism and once a set of criteria are fixed, any number of entities meeting those criteria should be allowed to function. We differ from this idea. Such a free entry may not be appropriate for ‘payment industry’," Gandhi had said, while adding that the idea that the regulator was discriminating against electronic payments firms was a misconception.

Smaller lenders and payments services experts say large banks, which have been trying hard to hold on to their customer base, may have to finally ease up and yield space to specialists who come up with customized services more in tune with customers’ needs.

With Facebook-owned messaging platform WhatsApp looking to launch its own payments service in India, the sector seems poised for further disruption. That may lead to another cut-throat competition, and create more incumbents keen to hold on to their customers.