Until the 2021 census, it is unlikely we'll find out the proportion of households with access to banking services

About 58% of all households in India (145 million out of 247 million) had access to banking services, according to the 2011 Census.

This number varied widely—from nearly 90% of households in Andaman and Nicobar Islands and Himachal Pradesh to less than 40% in Meghalaya, Nagaland and Manipur. There was also a significant rural-urban divide, with more than two-thirds of urban households having access to banking services while only 54% of rural households did.

A few months after coming to power in 2014, the National Democratic Alliance (NDA) government launched the Pradhan Mantri Jan Dhan Yojana (PMJDY), which sought to open low-cost savings accounts for the hitherto unbanked.

While the number of accounts opened under this scheme (254 million, see http://bit.ly/1S6TFw3 ) is larger than the total number of households in India, according to the 2011 Census, it is not clear how many unique households the PMJDY customers belong to, and how many of those already had access to banking services.

In other words, until the 2021 census, it is unlikely we’ll find out the proportion of households with access to banking services (though the PMJDY website claims nearly 100% of households have been covered by the scheme).

Access to banking matters more now in light of the recent withdrawal of Rs500 and Rs1,000 notes from legal tender. As I’d written in these pages several months ago, these notes made up for about 85% (by value) of all currency in circulation in 2015-16.

While I’d commented then that the fiscal impact of the move will amount to about Rs12,000 crore a year (http://bit.ly/1R1W4a0), the number is going to be far lower, thanks to the new Rs500 and Rs2,000 notes that are being introduced. The extent to which the new notes will replace the old is not yet known; so, it is not possible right now to estimate the fiscal impact of the move.

Removing 85% of all currency by value from circulation has had an impact on ordinary people, though, with the sudden drop in liquidity causing friction in even basic transactions that are otherwise straightforward. While small-value transactions might yet be conducted using smaller notes that are still legal tender, access to the banking system has become a necessary condition for larger transactions. More specifically, since cheques can be used while transacting only with trusted parties (thanks to the risk of a cheque bounce), access to debit cards determines the ability to transact in large amounts (until the new currency has sufficiently replaced the old).

In September 2016 (the last month for which data is available), there were 728 million debit cards outstanding in India. This doesn’t imply many people have debit cards, though, since many people have multiple bank accounts and debit cards. In September, each of these 728 million cards was used (on an average) once to make an ATM withdrawal, with an average withdrawal of Rs3,000. The number of times the average debit card is being used for ATM withdrawals has been falling steadily over the years, though (see chart 1). 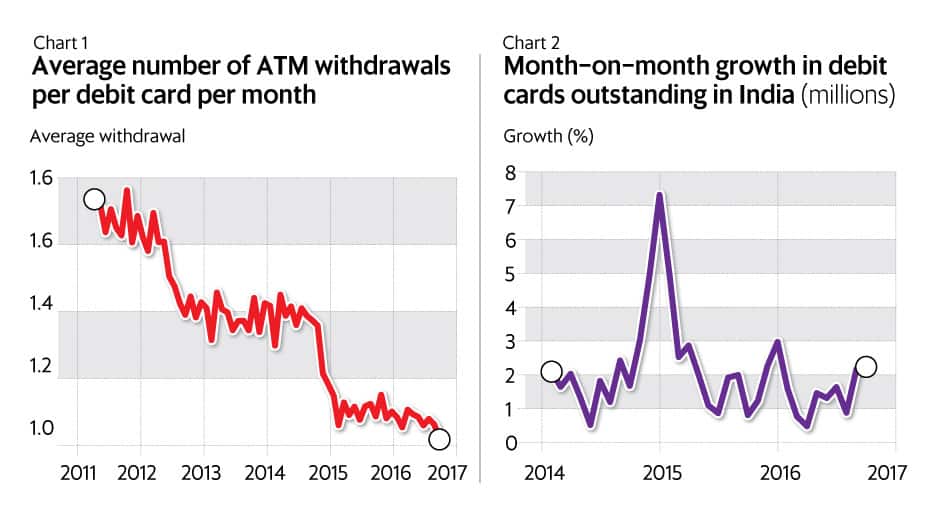 While the decline in the use of debit cards at ATMs seems steady over time, one period shows a prominent (“discontinuous") decline—late 2014-early 2015. This period coincided with the launch of PMJDY, where three-fourths of new account holders (195 million out of 255 million) were also given Rupay debit cards (as chart 2 shows, there was a discontinuous jump in the number of debit cards outstanding in this period).

What the two graphs together suggest is that while the Jan Dhan Yojana opened new bank accounts and gave debit cards, a large number didn’t bother using these accounts or debit cards.

This is worrying from the point of view of the recent withdrawal of high-value notes since it suggests that the access to banking services based on the number of accounts or cards is actually an overestimate (in terms of actual usage).

While some of these never used accounts (according to the PMJDY website, about 23% of all PMJDY accounts have never seen action, and have zero balances), they might start seeing balances soon as people deposit their high-value currencies into the accounts.

The use of formal banking can be a logistical and cultural challenge, and it is not clear if those who have so far not used bank accounts will be able to do so immediately.

A lot of people are not going to have it easy for the next few weeks until the withdrawn currency has been adequately replaced in the system.