New York: After uncharacteristically tepid sales in the July-to-September quarter, Apple came back with a vengeance in the last three months of 2011, vastly exceeding analyst estimates and setting new records.

Apple Inc. on Tuesday said it sold 37 million iPhones in the quarter, double the figure of the previous quarter and more than twice as many as it sold in the holiday quarter of 2010. 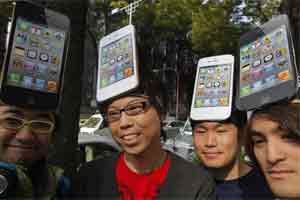 Samsung Electronics, which held that position for most of last year, has said it expects to report shipping about 35 million smartphones in the October to December quarter.

Analysts polled by FactSet were expecting earnings of $10.04 per share for the latest quarter, Apple’s fiscal first. Revenue was $46.33 billion, up 73% from a year ago. Analysts were expecting $38.9 billion.

The November launch of Amazon.com Inc.’s $199 Kindle Fire tablet didn’t appear to put a dent in the iPad’s sales, as some analysts predicted it would. Apple shares rose $33.03, or 7.9%, to $453.53 in extended trading, after the release of the results.

Chief financial officer (CFO) Peter Oppenheimer said the company expects earnings of $8.50 per share in the current quarter, and sales of $32.5 billion. Both figures are above the average estimate of analysts polled by FactSet, even though Apple usually low-balls its estimates.

Apple ended the quarter with a cash balance of a staggering $97.6 billion. That’s more than enough to buy Citigroup Inc. outright, or issue a special dividend of $100 per Apple share.

For years, investors have been frustrated with Apple’s unwillingness to put the cash to use, but complaints have been muted as Apple continues to generate record-breaking results and as the stock price keeps rising. Apple executives have said the cash hoard gives the company flexibility to make acquisitions and long-term supply deals.

If the stock rally in extended trading survives into regular trading Wednesday, Apple will retake the position of most valuable company in the world from Exxon Mobil Corp. Apple first unseated Exxon last summer, and the two have been trading places since then.

Apple’s results lifted shares of smaller companies that supply chips for the iPhone, like TriQuint Semiconductor, up 7.7%, Cirrus Logic Inc., up 6.8%, Broadcom Corp., up 4.2%, and Skyworks Solutions Inc., up 3.7%.