We want to see the first objects that were formed after Big Bang: John C. Mather

We want to see the first objects that were formed after Big Bang: John C. Mather

From the story of the Big Bang to the Nobel Prize to the ultimate fate of the universe—John C. Mather’s career as a Nasa (National Aeronautics and Space Administration) astronomer couldn’t have been more exciting. Reviving his failed PhD thesis idea, he designed and built the first satellite—COBE—to measure cosmic microwave background radiation, which, after its launch in 1989, provided the first conclusive evidence that the Big Bang theory of the origin of universe was right.

Mather’s team also tested the idea that the early universe had an exponential expansion called inflation. The only Nasa employee to have won a Nobel Prize, he says his public life has since changed, but not his professional life. His research projects undergo the same internal processes as before. At the 60th Nobel laureates meeting in Lindau, he spoke about some of the milestones before astronomers and physicists that would eventually tell us where the universe is headed. Edited excerpts:

Why is the story of the Big Bang so important for physics?

Is the Big Bang one of the few grand challenges left for the physicists? 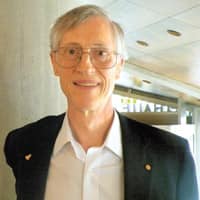 Scientific milestone: Mather is the only employee of the US National Aeronautics and Space Administration to have won a Nobel Prize. Seema Singh/Mint

There are different theories about the future of the universe. What is the most accepted view?

The most popular view is that it is accelerating and will continue to accelerate. In around 100 billion years, all the galaxies will go away. All the stars would have burnt up their hydrogen fuel and we won’t be able to see them at all, however sensitive our equipment may be. Another view is that it won’t accelerate forever. Yet another view says that we might have an additional Big Bang. The wonderful thing is that we don’t know, a conceptual breakthrough is needed. We hope that sometime we will have a theory of quantum gravity that would definitely tell us what people ought to work on. Right now, people are not happy with quantum gravity.

How soon do you expect that conceptual clarity to emerge?

It’ll be at least after one generation. Then it might turn out that when we finally have it, we’ll know somebody already had the answer but we didn’t really know if it was the right answer. Perhaps then people will look back and say—See, those ancients were so smart.

Why do you believe that we have a couple of billions of years before we need to move on?

You spoke about the acceleration of the universe and astronomers have also showed that it’s dark energy that’s causing this acceleration. Do we just have a name or is there a theory to explain dark energy?

There’s no theory popular enough to be recognized as theory, though there’s a suggestion that there is a law of nature that is requiring the universe to be as it is. Experimentally, our objective is to measure the history of this acceleration since we now know that this acceleration has been operating for five billion years. When did it start? We don’t know. Is it governed by Einstein’s constant or by something else? That, too, is unclear.

You are leading the James Webb Space Telescope (JWST) mission slated for 2013 launch. What results do you expect from it?

We want to see the first objects and stars that were formed after the Big Bang, how galaxies are assembled from small particles. By looking at the dust clouds, we hope to see how stars are made locally. We hope to understand how earth comes to support life.

Is there any exciting possibility beyond this?

It’d be a great surprise if someone tells us what’d be the right place to look for an earth-like planet with signs of life. We know we’ll find an earth-like planet as the Kepler Mission is already making a catalogue (of such places). What is unlikely so far is that our equipment is incapable of doing the chemical analysis of the atmosphere of the planet. So probably that’s for the next generation of telescope.

COBE gave you the Nobel. Do you think JWST will lead to a few more Nobel prizes?

It’s hard to guess. It won’t be for me. So far, we have two Nobels for cosmic microwave background radiation—for its discovery and its measurement. I think another will be when gravitational waves are detected. The hunt for dark matter will probably lead to a Nobel when it succeeds. I don’t think it’ll go to an astronomer. It’s more likely a particle physicist, theoretical or experimental. If we could find it (dark matter) in the lab, it’ll be so informative. Astronomers can tell you how much of it is there but won’t tell anything about the particles themselves. Carlo Rubbia (1994 Nobel Prize winner) has a list of 20 such particles, but we don’t have a good favourite yet.

As the space exploration gets bigger and more expensive, do you think international collaborations will increase? India has just begun exploration of outer space...

It’ll happen not just because projects are expensive but because there is a lot of interest. Space science is a cultural phenomenon driven by human curiosity, and curiosity is worldwide. Canadian and European space agencies are collaborating in JWST. When a mission is designed to measure dark energy, it is also likely to be an international project.

Did the Nobel Prize change your life as a civil servant?

Yes, my responsibility to speak to the general public is much more now than I had before.