Blow to Tata Power, Adani as Supreme Court sets aside ruling on tariff

New Delhi: Tata Power Co. Ltd and Adani Power Ltd were dealt a major setback on Tuesday when the Supreme Court set aside an earlier tribunal ruling that allowed the power producers to charge compensatory tariff from consumers.

The ruling will likely weaken the finances of both companies, particularly Adani Power, which may have to write off some of the additional revenues it had booked in anticipation of a favourable verdict.

ALSO READ: What next for Adani Power, Tata Power after Supreme Court order on tariffs?

A bench comprising justices Pinaki Chandra Ghose and Rohinton F. Nariman ruled on a batch of appeals challenging a 2016 order of the Appellate Tribunal for Electricity (Aptel) which held that an unforeseen increase in the cost of coal would be a “force majeure event" under the power purchase agreements (PPAs) between power-generating companies and distributors.

The companies cited a change in Indonesian rules in 2010 as a force majeure event that raised the cost of coal imported from that country to fuel their electricity plants in Mundra. 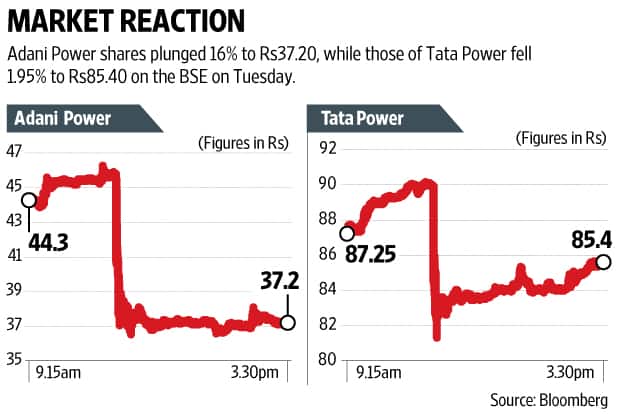 “The impugned order is set aside. The only benefit we are allowing is if the force majeure event is related to Indian laws," the court said.

Aptel had referred the decade-long issue to the Central Electricity Regulatory Commission (CERC) to grant relief to Tata and Adani in accordance with the PPAs. In December, CERC came out with a compensation formula that allowed the companies to recover the higher costs stemming from the rise in the price of imported coal. This order will also stand nullified with the Supreme Court ruling.

The annual impact for Tata Power could be a negative of Rs800-Rs1,000 crore if they want to run this plant at minimum PLF (plant load factor), according to Rupesh Sankhe, an analyst at Reliance Securities.

“Since the (Mundra) plant will not be viable for Tata Power, it could look at an option of foregoing its equity of Rs4,000 crore in the plant and asking lenders to come forward and take (over) this project. Lenders, in turn, can then restructure the plant or sign new PPA or find a new developer for the project," Sankhe said.

CGPL has been consistently reporting cost under-recoveries. In the December quarter, it reported an under-recovery of 70 paise per unit, which led to a loss of Rs244 crore for the unit.

“CGPL/Tata Power considers it very unfortunate that neither Regulatory Powers of CERC nor Forced Majeure as adjudicated by Aptel, have been accepted by Hon’ble Supreme Court," Tata Power said in an emailed statement. “The final order got uploaded in the evening and the company is studying the same. However, CGPL would continue to work towards alternatives, including sourcing of competitive and alternative coals to best contain the onslaught of under recovery."

For Adani, this ruling will have more severe consequences, not just because of the additional revenues it had booked, but also due to its high leverage levels.

In the past four years, the company has included likely compensatory tariffs of Rs8,800 crore—an amount higher than its net worth of Rs7,948 crore, according to analyst estimates.

“Adani Power had been infusing close to Rs2,000 crore in this business every year and there is very limited visibility with respect to the profitability going forward," said an analyst who didn’t want to be named as he is not authorized to speak to reporters.

Adani Power’s consolidated debt at the end of September was Rs49,547 crore. After accounting for the cash in its books, that translates into a net debt-to-equity ratio of 6.1. Even after accounting for compensatory tariffs, Adani’s Ebitda (earnings before interest, taxes, depreciation and amortization) accounts for about 1.25 times its interest costs for the nine months ended 31 December.

However, Adani Power said in a statement to BSE that “its preliminary analysis showed that it will get benefit in respect of its power purchase agreement (PPA) for 1,424 megawatt (MW) to Haryana state distribution companies (discoms), PPA for 3,300 MW with Maharashtra Discoms and in PPA for 1,200MW with Rajasthan Discoms".

“The company would decide further course of action once the final order of Supreme Court is available," Adani said in a filing.

The company seems to be referring to the court’s order that it will allow “force majeure" benefits if it is related to Indian laws.

In 2016, Aptel ruled in favour of the state electricity regulatory commissions of Maharashtra and Rajasthan, which had disallowed compensatory tariffs for Adani’s Tiroda and Kawai plants respectively, saying that the provisions of force majeure do not apply.

Analysts declined to comment on this aspect without seeing the court’s order.

Gireesh Chandra Prasad in New Delhi and Shailaja Sharma in Mumbai contributed to the story.