Cabinet has cleared ordinance to speed up the resolution of Rs9.64 trillion worth bad loans choking the banking system. Here's a look at the NPA problem in 5 charts

Mumbai: The Union cabinet on Wednesday decided to amend the Banking Regulation Act to speed up the resolution of the Rs9.64 trillion stressed assets choking the Indian banking system. While details are awaited, markets cheered the move with banking stocks gaining as much as 6% when trading opened on Thursday.

Here’s a look at the non-performing asset (NPA) problem in five charts. 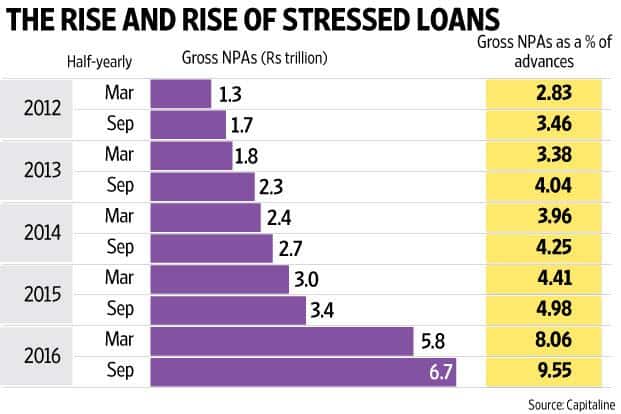 Stressed assets have been consistently rising for at least the past five years owing to a combination of factors. In the initial stages of the problem, this was largely attributed to the so-called policy paralysis with many large projects being stuck because of raw material supply and land acquisition problems. With an economic downturn, demand also didn’t take off leading to surplus capacity in many industries, thus impairing debt servicing capacity. Also, many banks have been profligate in lending without adequate checks and safeguards during the boom days leading up to the 2008 financial crisis. Despite a slew of schemes launched by the Reserve Bank of India (RBI), this growing pile of toxic debt continues to elude resolution. The root of the problem—and this will lead to an increase in bad debt—is the falling debt servicing ability of Indian firms. They are also highly levered, especially in industries such as power and steel. According to Credit Suisse estimates, about 40% of debt lies with companies with an interest coverage ratio of less than 1. 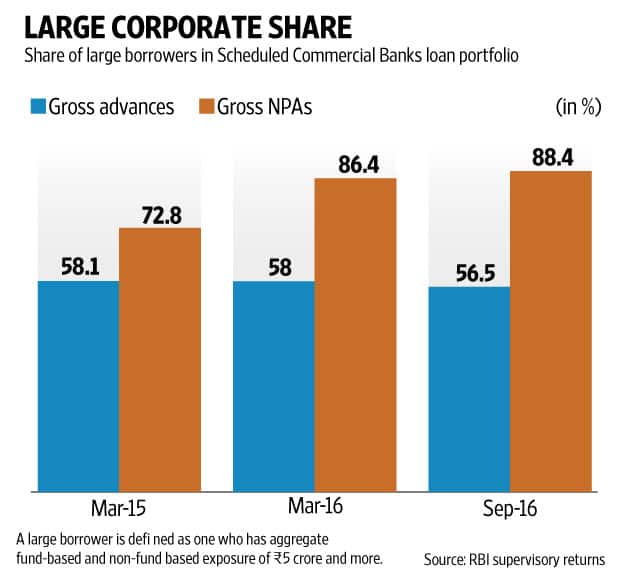 While falling debt servicing ability is seen across the board, for Indian banks, a quick resolution would mean focusing on large companies. According to the RBI’s December Financial Stability Report, large borrowers (the central bank defines these as debtors to whom lenders have an exposure of at least Rs5 crore) account for 56% of bank debt and 88% of their NPAs. Last month, finance minister Arun Jaitley had said focusing on 40-50 big corporate borrowers would be enough to solve the crisis quickly.

One way to solve this would be if banks take haircuts and sell it to asset reconstruction companies or private equity funds, but fear of vigilance inquiries has stopped them from taking such steps. 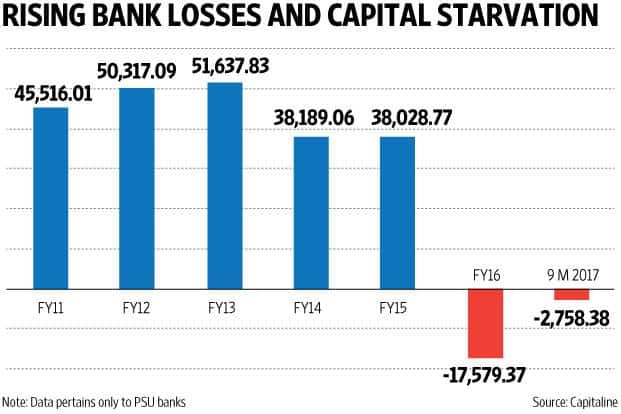 This toxic debt mountain has meant that banks need to set aside ever-increasing sums of money as provisions. The problem is particularly virulent for state-owned banks which are showing consistent losses for the past at least six quarters. It is also not going to go away soon because now the RBI has advised banks to consider setting aside higher provisions even for good loans in stressed sectors.

Rising losses has also meant that many PSU banks are teetering on the edge of breaching Basel-III capital adequacy norms. The International Monetary Fund estimates that about a third of the Indian banking system needs to set aside at least three years of earnings to provision adequately for bad loans. They can’t expect much help from the government either because of fiscal constraints. The end result of the NPA problem: A slowdown in credit growth, especially to Indian companies. Capital-starved banks can’t expand their balance sheets quickly enough. There is fear of lending to corporates. Retail loan growth is the key reason why system credit growth is holding up close to 5% levels. In the last two years, banks have been overtaken by the debt market as the key source of credit to the commercial sector.