Home >Industry >Infotech >Will FY17 be a choppy year for Indian IT?

Will FY17 be a choppy year for Indian IT?

Headwinds in retail, healthcare may lead to quarterly ups and downs in Infosys's performance, its COO Pravin Rao has warned

Infosys Ltd’s chief operating officer U.B. Pravin Rao has warned investors of a bumpy ride in fiscal year 2017. According to him, there are some headwinds in the retail and healthcare business segments, which could lead to quarterly ups and downs in the firm’s performance.The two segments account for 22.5% of Infosys’s revenues. Notwithstanding all this, the company has maintained its annual revenue growth forecast of 11.5-13.5%.

Investors were naturally disappointed. The chances of the company beating its revenue guidance are now slim. Infosys shares fell 4.6% after Rao’s comments became public. The moot question for investors in information technology (IT) services companies is whether the entire sector’s performance will be choppy this year.

According to Rao, Infosys is positioned well in the banking and financial services (BFS) vertical, where it has won large deals and has a strong pipeline.

Analysts at Nomura Financial Advisory and Securities (India) Pvt. Ltd said in a 7 June note to clients that the financial performance of US and European BFS firms has deteriorated sharply in the March quarter. Revenues of companies that are part of the Fortune 500 fell 10% from a year ago, while their operating profit fell 22%.

The financial performance of clients in a sector is typically seen as a lead indicator for IT services demand. Data from the sector, which accounts for about 35% of revenues of Indian IT companies, suggests that FY17 could be a challenging year. Besides, macro data from the US has not been encouraging either—private sector job additions are significantly lower, compared with year-ago levels and consumer confidence has declined. 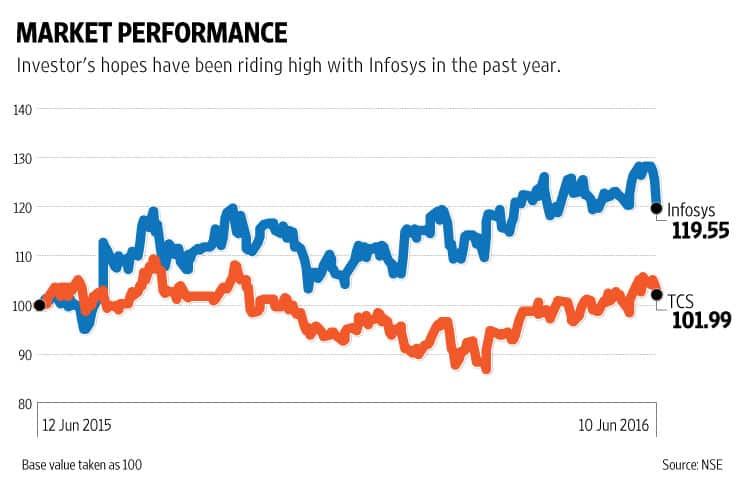 On the other hand, while Rao said that the performance of retail companies in the US has deteriorated and is the poorest in recent times, data collated by Nomura suggests otherwise. The broker said in its note that the performance of US Fortune 500 retail companies remains sluggish, although things haven’t worsened. To be sure, their revenues and profit were flat in the March quarter, more or less in line with the trend in the preceding quarters.

It’s likely that the set of clients that Infosys services are more troubled vis-a-vis the average performance of the sector. As such, the FY17 performance of companies will continue to be skewed, and will depend on the exposures that companies have to certain sectors and companies.

But, overall, Infosys’s latest comments are helpful as they bring in a reality check for some investors who were expecting Infosys to beat its revenue guidance. With valuations of over 19 times estimated FY17 earnings, Infosys shares were pricing in high expectations.