US slowdown spells bad news for developers targeting IT sector

US slowdown spells bad news for developers targeting IT sector

The market for information technology-related real estate, such as locations in IT parks, could see a sharp correction because of an impending slowdown in the US, the largest market for Indian IT companies. 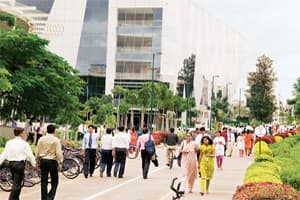 Shaving costs: Infosys campus in Bangalore. Real estate analysts predict a price correction in cities where several technology parks are being developed. The slump could last for the next two years at least, they add.

Real estate analysts predict a price correction in cities where several IT parks are being developed. They add that the slump could last for the next two years at least. “We could see as much as 15-40% of IT parks’ prices being shaved off in destinations where supplies are coming up at higher prices, such as Chennai and Bangalore in south and Pune in west," said Chanakya Chakravarti, managing director of real estate at Actis Advisers Pvt. Ltd, a private equity firm.

Actis Advisers is in the process of raising its first India real estate fund of $300 million (Rs1,191 crore). It has already received commitments for $100 million. Chakravarti said the fund will invest in non-IT commercial real estate.

The timing could be a problem, said an expert.

“It always takes a couple of years for developers to put up a new facility; for supply to catch up with demand. Unfortunately, it is happening at a time when we are expecting a slowdown in (the) IT sector as the US economy is facing a recession," said Ambar Maheshwari, director of investments at DTZ Holding Plc., a real estate consulting firm.

The country’s IT sector may not slow, according to the National Association of Software and Services Companies that forecast software and services exports will grow from $40 billion this fiscal to $60 billion in 2009-10, when total revenue is expected at $73-75 billion.

However, even top IT firms such as Tata Consultancy Services Ltd, Infosys Technologies Ltd and Wipro Ltd have seen profit margins dip this fiscal in the nine months to December. That could prompt these firms to try and cut costs.

“There will be some correction and we will see IT firms moving some of their newer campuses to cities such as Nagpur or Indore (in an attempt to cut costs)," said Kumar Gera, chairman, Confederation Real Estate Developers Association of India, a real estate developers lobby.

However, Gera claimed that there is still a gap in the market: “If you want ready-to-use IT space, it is not available," he said. The price correction, he added, “will be a blip in the larger growth story of the real estate sector till such time when the IT companies figure out a new strategy to beat the recession threat."

A late 2007 report from Jones Lang Lasalle Meghraj said cities such as Guwahati, Chandigarh, Nashik and Indore would be the new destinations for IT companies in 2008.

Gera added that the inherent problems in choosing a smaller city as an IT hub would include relocating talent. “The best talent that is now available in Pune or Bangalore would not want to go to Indore in Madhya Pradesh. Typically, a company located in Bangalore may look at Mysore or another adjoining city for its new campus," he said.